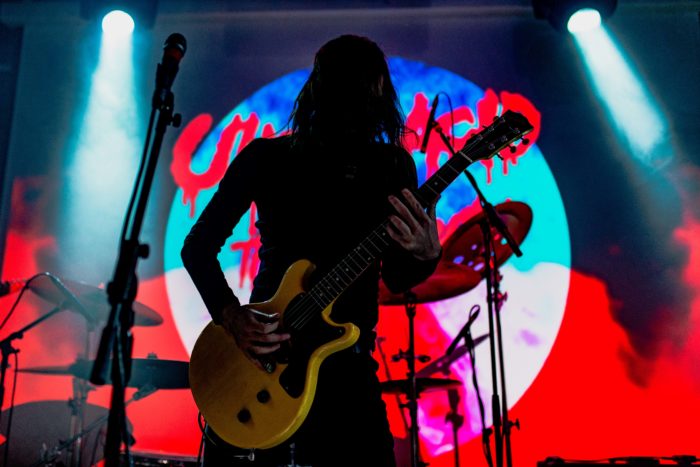 Tuesday evenings are for stoner-rock. Thick, bassy, repetitive and loud – Uncle Acid & the Deadbeats are all of the above. Whether that’s a good thing or not? I’m not so sure.

“How you fucking feeling, Manchester?” a tall, gangling figure shouts into the microphone. Uncle Acid & the Deadbeats are two songs into a set that promises to get loud. Show opener I see through you setting the tone for a deafening night.

The front row of bearded, full-bellied blokes cheer – their female counterparts huddled up behind Bathory t-shirts and cut-off biker jackets somewhere beneath. There’s enough leather in Gorilla to send a vegan on a killing spree.

Behind them, a projector cuts scenes from song to song. Horror movie excerpts phase into a kaleidoscope reimagination of the band’s performance that continues in different forms throughout the set. The latter like the sort of crazed drawing you’d expect from John Frusciante in the late ’90s.

Uncle Acid’s songs sit somewhere between the pounding simplicity of Black Rebel Motorcycle Club and the drone-y thud of early Kyuss. On record, the Marc Bolan inspired vocals cut through a mix of hazy doom, mid-tempo stoner and all-out rock. Think King Tuff on steroids. There’s beauty in how the tracks merge into each. It’s almost enough to think that the album format isn’t dead. Over the course of five albums, their flirtations with stoner and doom have always had a jangly pop sensibility.

Loud, balls to the wall and relentless. Kevin Starrs’ vocals are cased in a wall of sound – it’s thunderous. The duelling guitars of Starrs and second guitarist, Vaughn Stokes, push the boundaries of what volume can really do to a guy’s eardrums on a Tuesday night. It’s thick, full-bodied and fuzzy.

For four or five songs I’m blown away. The volume, the guitar tone, the smack of the snare drum. It’s glorious.

I look at my watch. Shit, this is getting predictable.

Pusherman, Over and Over again, Death’s Door and Melody Lane all sound good. But I’m begging for variation. I pray for dynamics. I plead for something quiet. Without it, appreciating the loud is impossible. The wall of sound becomes muddy and my legs start to tire. Even the bearded heavies in the middle begin to wane. Pacier mid-set banger Blood Runner and Sabbath-y old favourite Crystal Spiders offer some relief from the bottom string but it’s too late.

I’ll cut you down is on my plane crash playlist. I put it on before take-off and landing just in case the plane hits the ground in a ball of flames. It’s the sort of riff I don’t have an issue dying to. And when it arrives towards the back end of the set I shut my eyes and imagine being in the air. It brings me back to life.

At times, the performance seems so well rehearsed that it teeters into the ridiculous – if only briefly. At times, Starrs’ projected body on the screen behind him matches his head swings and guitar slams exactly. The three men up front with their black outfits, full beards and shoulder-length hair full body headbang in unison. They’re a loaded gun with the safety on. Too safe. Too easy. Preaching to the converted.

I feel the same way about the live Uncle Acid & the Deadbeats as I do about Royal Blood. There’s an energy that pours off the stage and into the front row. An untamed river that washes you away in a flood of fuzz, sweat and beers. But without stopping for pause, there’s nothing to compare it to. Another song played at 11 feels anaemic when there’s no dynamic.

There is such thing as too much of a good thing, after all.

A note on Blood Ceremony…

Thanks to the crippling reality of work, we only made it to Gorilla in time for Blood Ceremony’s last song. The Canadian rockers sure held the audience, Alia O’Brien’s huge vocal range in constant battle with the low thud of Sean Kennedy’s detuned guitar. Whatever track they closed with was mad. Live flute and keys over stoner riffs? One, please.

I can’t vouch for the rest of the set, or whether the novelty of woodwind wears off, but the sounds I heard were right out of the stoner-rock playbook, then twisted by trippy flute playing. Whether that’s a good thing or not, only Spotify will help me tell.

Disclaimer: I know what you’re thinking: I wasn’t in the right frame of mind. Going to a stoner-rock gig without a puff of the devil’s lettuce is a bit like drinking a J2O at an Irish wedding. But I listen to this sort of music all the time – 90% of that time completely sober. You shouldn’t have to, and you don’t have to, partake in the sweet leaf to enjoy this sort of music.

To hear more from Blood Ceremony, check out their Facebook. To see more killer pics from Adam, check out his Instagram.