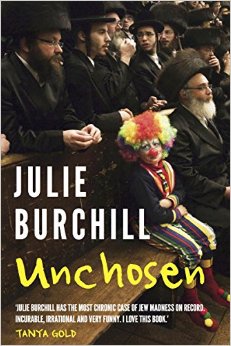 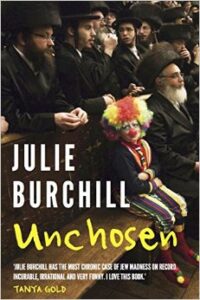 Unchosen – The Memoirs of a Philo-Semite by Julie Burchill (Unbound)

Julie Burchill, in case you don’t already know, co-authored the seminal ‘The Boy Look At Johnny – The Obituary of Rock and Roll‘ in 1978. Still only a teenager herself, the book effectively punctured the balloon of punk rock before it even had the chance to be properly inflated. Anybody over the age of forty that hasn’t read it really ought to attend to that cultural omission without any further delay.

Back then Burchill answered an ad for ‘hip young gunslingers’ in the NME when it was a publication genuinely worth reading and before it became the Smash Hits for the Gap Year generation that it is today. Burchill took up her guns, started shooting and hasn’t stopped since. Sometimes scattergun, as she is when she went after the predominantly posh public school Greens in the wonderful collection of essays on hypocrisy, ‘Not In My Name’ co-authored with long time friend and collaborator Chas Newkey-Burden, and sometimes with the in-your-face, point blank accuracy of a contract killer as she does in her latest book Unchosen, when she goes after journalist India Knight and her ignorant moral relativism. Almost forty years on she’s showing no signs of running out of ammunition, let alone even thinking about laying those guns down and  knockin’ on heaven’s door.

Unchosen – Confessions of a Philo-Semite is the not before time part autobiography and chronological account of what is in effect an abiding love affair. Not with a person, but with a religion and a country: the Jews and Israel.

Rattling through chapters like ‘Meet The Perverts’, ‘Off My Face In The Promised Land’ and ‘The New Jews’ the self confessed “half intellectual, half lout” is contagiously bitchy and delightfully invective throughout. Her farewell missive to her former employers at The Guardian actually made me swell with pride. I lost count of the amount of times I laughed aloud and I, a grown man with a lifetime of experiences behind him, squealed at least twice and cried at the end. It soon becomes clear, however, that Unchosen is two books in one.  On the one hand is the deliciously bitchy account of times at the NME, fall-outs with former husbands and in-laws, and assorted literary and journalistic pub brawls. That’s Burchill the lout. Burchill the intellectual has also composed a well researched, insightful and succinct polemic on the history of the Jews in England from Richard I to present day anti-semitism.

As a memoir it’s pretty much faultless. It’s funny, engaging and moving. It tells of a life well lived and you can ask for no more from any memoir. What sets this one apart is the sheer joy and enthusiasm of the writing. Every time you turn a page you know something is going to be on it that leaps up and kisses you on both cheeks. Unchosen is unambiguously direct throughout, but that’s Julie Burchill all over. You don’t tiptoe around The Burch. If you do, she’ll catch you out of the corner of her bleary eye and punch you full in the face.

Unchosen is not  just nigh on perfectly written it is also perfectly timed. This last Summer has seen an unprecedented rise in anti-semitic incidents and Julie Burchill is one of Israel’s and Judaism’s most vociferous advocates. Burchill’s is a voice of humour, urgency and clarity in the face of the insipid cant and hypocrisy that surrounds any recent discussion on Israel. Sure, it’s forceful and unapologetic but after a Summer of sweaty bleating from the cranks and racists of the allegedly pro-Palestinian faction and their associated nitwit dullard supporters from the arts and media it arrives as fresh and as bright as an Autumn morning.

There will be the inevitable and ineffectual intellectual invertebrates wailing that anti-Zionism is not the same as anti-Semitism. But really, after the events of these past few months that line has become so blurred it’s barely even worth acknowledging anymore. Besides, it’s not us (and I count myself as a fellow philo) that have the explaining to do, it’s everybody else.

But critics of Burchill’s love affair with Judaism and Israel are missing the point. Unchosen is not a book about a blind, irrational obedience with a political or religious ideology. At its heart it is a tender look back at a first love and realising that in spite of everything that has passed since that first teenage flush of infatuation, all the inappropriate lovers and husbands, the fights and the fallouts, the bitter, drunken tears and cocaine hazes, the inevitable bruises and breaks that a fully and ferociously lived life just keeps hitting you with, that love is as strong and devoted now as it was when all of those experiences still lay in front of you, and it probably always will be.

When you strip it right down, Unchosen is a tender and rather delicate and moving love story, told beautifully, of a people, of a place.

Don’t we all wish we had someone that loved us so?

All words by Robert Pegg. More words from Robert can be found at his Author Archive.