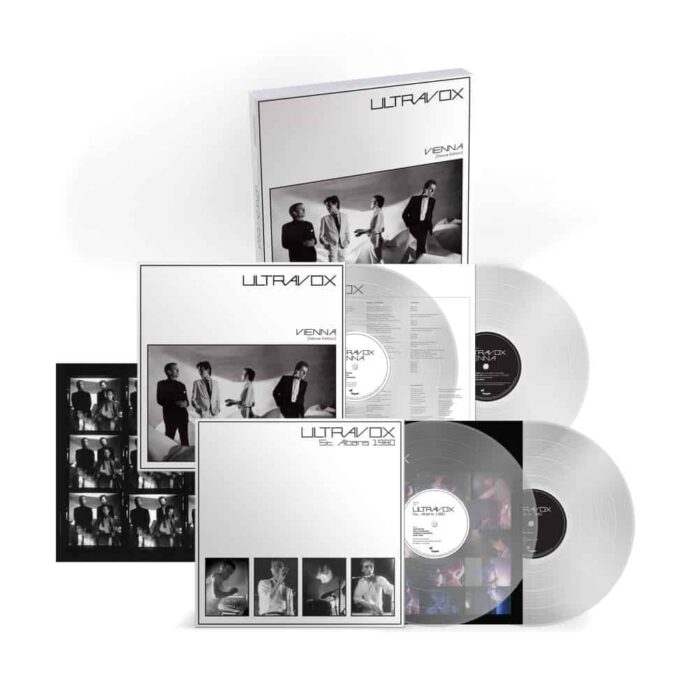 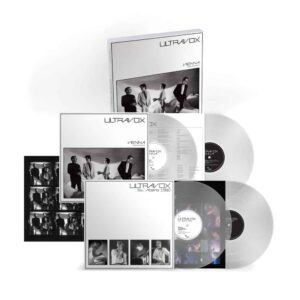 As Ultravox’s breakthrough album Vienna celebrates its 40th birthday with a new box set reissue, Banjo takes a look at the circumstances that led to this landmark 80s album.

Ultravox have had, as footballing pundits might say, a game of two halves. They started out as a critically acclaimed but commercially ignored band with John Foxx as frontman, before replacing him with Midge Ure and reversing both of these situations.

Vienna was the album that took them from cult concern to one of the 80’s biggest bands.

Their debut self-titled album was released in 1977 and sounds to these ears like it was written before the onrush of punk, but recorded after it. Ultravox! (then with added exclamation mark) mixed Berlin-era Bowie cool with some new wave sensibilities. Tracks such as My Sex and I Want to be a Machine set out their stall as purveyors of cool, futuristic music that was difficult to pigeonhole.

2nd Album Ha!-Ha!-Ha!, also released in 1977, wore its punk influences more openly and again received praise from the music critics of the time.  Listening back to the album now, it does sound like its punk clothes were perhaps added in haste and didn’t actually fit that well.

For their 3rd album, the superb Systems of Romance, Ultravox decamped to Berlin with producer Conny Plank. Their sound had moved on from their early foundations and had keyboards moved very much to the foreground. It is easy to see that Systems of Romance laid the foundations for much of what was to come, with both synth pop and the New Romantic movement owing it a great deal. The album was a huge step forward for Ultravox and is almost perfect from start to finish.

Commercial success however still somehow eluded them, and in a burst of overreaction, their record company dropped them and deleted their three albums from their catalogue. As a result of this, Ultravox split up following a self financed American tour, their commercial promise unfulfilled.

And that, it seemed, was that. Ultravox were to be unfairly consigned to history, a victim of the major label demands for shifting units.

But behind the scenes, things were still happening. On the recommendation of Rusty Egan, Ultravox Keyboard player Billy Currie asked Midge Ure to join a revitalized version of the band.

Ure had quite the varied history at this point. He first found fame with Slik, a copyist Bay City Rollers, who had some success in the mid 70s, before teaming up with Egan and Glen Matlock’s to form Rich Kids. Prior to being recruited for Ultravox, he was playing guitar for rockers Thin Lizzy, making his career trajectory one of the strangest of the 70s.

Ure’s appointment to the Ultravox ranks marked another change of direction, along with an accompanying change of audience. Their first single together, 1980’s Sleepwalk, made the top 30, which must surely been the cause of much relief and celebration for the band.

This may have seemed to be short-lived however, as 2nd single Passing Strangers stalled at 57 in the charts. The album Vienna was released and made it to number 14 in the album charts before beating a hasty retreat.

But a change in fortune was just around the corner. In January 1981, Ultravox released the album’s title track as a single.

Vienna was a huge hit and became one of those rare breeds of songs that seem to soundtrack a certain era. It was everywhere, on TV, radio and a thousand video jukeboxes.

The image of Midge Ure’s foggy breath and pointy sideburns became a kind of visual shorthand for 1981’s cold winter. Vienna went on to become the 8th best selling single of the year and to win a Brit award for Single of the Year.

Famously, despite all this ubiquity, Vienna never hit the number one spot, but was kept at number two for four weeks, three of those playing second fiddle to Joe Dolce’s risible Shaddap You Face. It’s parent album re-entered the charts following the single’s success and also made it to No 2.

Vienna was so successful that, finally, Ultravox had their place at the top table. Further success followed until the band split up in 1988, after a golden run of records and tours.

This year, Vienna turns an incredible 40 years old. We know, where does the time go! To celebrate, a special anniversary version of the album will be released on October 9th.

The CD version features 5 discs that take in the original 1980 analog version, a remastered stereo version of the album, a collection of singles and b-sides, a set of rehearsals and a live recording from St Albans in 1980.

There are two vinyl versions available, featuring selections from the above, a deluxe version features four discs pressed in clear vinyl and a double album version on standard vinyl.

The original album has stood the test of time surprisingly well. Ure replicates Robin Simon’s guitar work well, having replaced both him and John Foxx in the band.

His addition to the band took away John Foxx’s more arty and perhaps obscure reference points and replaced them with a more mainstream sensibility. He may not have turned Ultravox into a pop band per se, but he did make them more conventional and aligned them to a bigger audience.

Given the success that Ure steered Ultravox to, maybe this is what was needed for the band to succeed commercially, something that seemed important to them. Where some bands are content to remain on the fringes producing leftfield music, Ultravox seem always to have wanted to be stars.

Listening back to Vienna, it seems to straddle a line between 80s pop and something perhaps more credible. This is a difficult trick to pull off, but Ultravox succeed where others have failed, due to their superior songwriting talents and their musicianship, but also because they still have an eye on their post punk sensibilities and their futurist aims.

Opening track Astradyne starts the album off with a bridge between the old and the new Ultravox, a brooding seven minute epic with keyboards to the fore and a very Ultravox type of guitar solo as the first notable contribution from Ure.

Next track New Europeans gives us the first real taste of the new mainstream direction. Gone is the ice cold detachment of Foxx and in comes a more straightforward and deliberately epic sound. Replacing a front man is always a huge step for a band and one that will change the band for better or worse, but there is no denying that the Vienna version of Ultravox connected with a huge audience of 80’s kids.

The remastered version of the album that makes disc two continues this process of smoothing out the rough edges. It may make for a more modern sound, but it is the original album that wins out for us here.

Disc three is something of a hotch potch, taking in a cassingle version, a 12“ mix and live/rehearsal tracks. Herr X, a b side from the Vienna single, and Alles Klar from All Stood Still are cool slices of 80s electro, proof again that b sides can so often contain buried treasure.

Disc four is comprised of rehearsals recorded to cassette in 1979 and 80. A number of these are instrumental, presumably recorded prior to Ure joining the band. Personally I love this kind of thing, a peek behind the curtain that lets the listener in on private moments not originally intended for public consumption. It is fascinating to hear the songs away from all studio frills and trickery. They compare well to their studio counterparts and add an interesting angle to this box set.

Disc five is a live recording of a show in St Albans in 1980. At the time, the band were still including of their earlier songs in their set and again it is interesting to hear how these are handled by the new line up. Ure resists any impulse to change the songs or, to use a phrase we here all too often these days, make them his own. He is an accomplished and stylish guitarist and he slips effortlessly into his role in the band.

Altogether, the box set of Vienna provides many happy hours for Ultravox fans. It is without doubt an album worthy of revisiting and this tribute is welcomed for giving the album another chance to shine, polished up for the 21st century that Ultravox always seemed to be predicting.