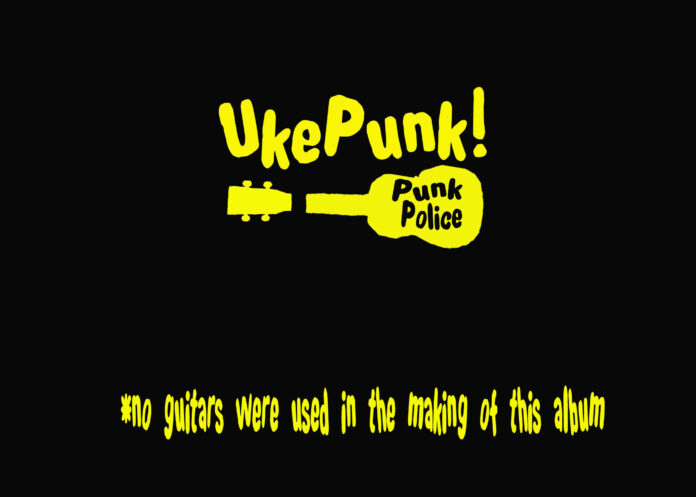 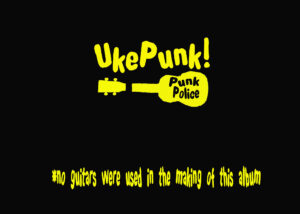 UkePunk are a band from Lancashire. They play punk songs and the main instrument is a ukulele. Actually, that’s a bit uncharitable cos they also have a stand-up bass and a drummer who bashes one o’ them boxes that he sits on. I first came across them when lead singer and ukulele player (ukeleleist?) Paul was doing solo ukulele versions (ukelelied?) of classic punk tunes. At the time UkePunk cut something of a forlorn yet earnest figure, a vibe which I found irresistible as forlorn yet earnest is kinda what we all were when we first got into punk as kids. This, by the way, was a good couple of years before I ever heard of those other excellent uke exponents The Pukes. And getting there first is sorta what punk is all about innit? At least it is to the punk police, from whom this album takes its name.

Yes, title and opening track Punk Police epically buttonholes those punk tastemakers from the suburbs and, er, urbs of the British Isles who were “there first”. In punk circles these troglodytes really do exist and Uke Punk gives ‘em a good old kicking, taking those to task who’ll “tell you what to listen to” and “tell you what to wear”, hilariously noting that the punk police’s assertion that “They were at the Free Trade Hall” (July 1976, fact fans) could only have been true if they’d been wearing their school shorts, the scorn-filled cry of “Course you were!” absolutely hammering the point home. Seriously though, the album is off to a fine swaggering start, the music somewhere between studio-polished and warts ‘n’ all, complete with irresistible punk singalong choruses.

From here on, we’re off on a punk-tastic 33 minutes of UkePunk humour, soap box rant and ruminations on the finer and less-than-finer things in life, all set to an instant grab groove of earworm tunes- the vocals gravelly, the music insistent and the backing supremely less-is-more. The songs cover quite some ground, from the almost John Shuttleworth-esque stylings of “Northern Girls Are Gravy” (school disco fumblings with the opposite sex), “Imaginary Girlfriend” (what’s not to like about internet porn?), “Girl AcrossThe Road” (everybody had one, didn’t they?) and “James Bond” (no prizes for guessing) to the political dissatisfaction of “Mister Mister” and “I’m A European” (careful, boys- that nice Mr Farage might be looking for a new theme tune…)

The engaging “Thrill” demonstrates that moody atmospherics is perfectly capable with a ukulele in the right hands, and the celebration of life’s good times in “This Is The Business” positively skanks along. Unafraid to nail colours to the mast, the album closes with the agit-punk pop of “Frack Off” which comes across part pub singalong and part “We Shall Overcome”, like some unearthly happening of a mob of drunken punks stumbling out of the snug of the Dog and Duck to lend their support to Swampy, the Greenham Common women, the Barton Moss anti-fracking protestors and anyone else within earshot. Marvellous stuff.

This is a thoroughly enjoyable album which successfully treads the dangerous line of not taking itself too seriously without playing it for laughs. The mix of subjects from the personal to the political, the two often blurring within a song, take the listener back to days of punk yore when we had other political things to moan about and the personal wasn’t all moonlight and roses, but was just as likely to reference the girl who worked in the cake shop. I’m thinking Television Personalities meets the Undertones in the park on the swings. With ukuleles. The key is, though, that although all this might seem nostalgic on the face it, the whole thing feels very modern. It’s a staggering achievement for three old punks with cheeky grins and empty pockets (the album recording and production bill footed by one o’ them there new-fangled crowd funding campaigns.)

So- wanna know what passes for radical, relevant, rockin’ punk rock in the twenty-first century? Ignore the punk police and check out Uke Punk. You won’t regret it guv’nor.

Punk Police is out now and is available on CD from here and at gigs- UkePunk can be found in all their glory at https://www.ukepunk.com/

All words by Philip Thompson. More writing by Phil on Louder Than War can be found here. You can check out his band Bug at their website at bugpunk.co.uk