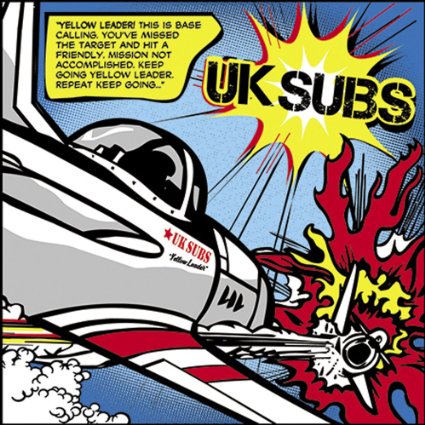 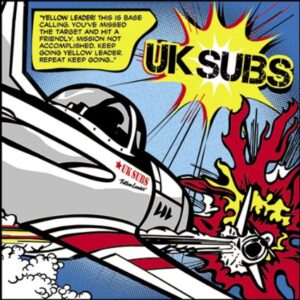 I have to admit, I’ve always been in two minds about the U.K Subs. Clearly, they’ve written some great tunes over the years, and while some bands weather numerous line-up changes, others seem to have a ‘carry on regardless of quality’ approach. To my shame, I’ve never actually bought a Subs album before; they were the kind of band that I’d borrow from mates, dip in and out, then forget about for a while.

Over the years though, what has been apparent is Charlie Harper’s commitment to making new music, with scant regard for anyone’s approval; he does what he likes. Rightly so. The current line up have been together for seven years and, crucially, have now made three great albums in a row. Not being a rabid Subs fan gives me some objectivity to listen to their new releases reasonably impartially.

Yellow Leader (out now on Captain Oi! Records) sees the band one letter away from their completion of alphabetical studio albums. Who would have dared predict that thirty years ago? Like the two previous albums, Work In Progress and XXIV, there’s a continuity of sound and a variety of styles that might surprise people. I put this down to a confident line-up which shares the song writing. Sick Velveteen is a strong, tight opener with a great bass sound; Artificial Intelligence is a simpler but catchy song thanks to guitarist Jet’s ear for a melody. Bordeaux Red rails against war while reminding us that “history is all we have…be warned”. This is one of my favourites, penned by Alvin Gibbs. Things get heavier with Chemical and Deconstruct before Charlie’s Diatribe brings another insistent melody which wouldn’t be out of place on TOTP 1979.

18 new songs, packed with ideas and tunes. Gibbs’ Feed The Whore has a 60s feel to the riff, if not the lyric; drummer Jamie Oliver’s Heathens unsurprisingly packs a wallop; Rebellion Song is a slice of acoustic melancholy; Sin City Blues with scorching harmonica could be prime-era Hanoi Rocks. Before ending on an instrumental note with’611, we are treated to some jazz (yes, really) with Archaeology.

While Charlie Harper should be cherished for his dedication to his muse, this is very much a band effort and all the stronger for it. Now, I just need to invest in the previous two albums and catch them on their up-coming tour (Luton Hat Factory on May 1st with support from the excellent iHazard!). At this rate, album Z should be something special.