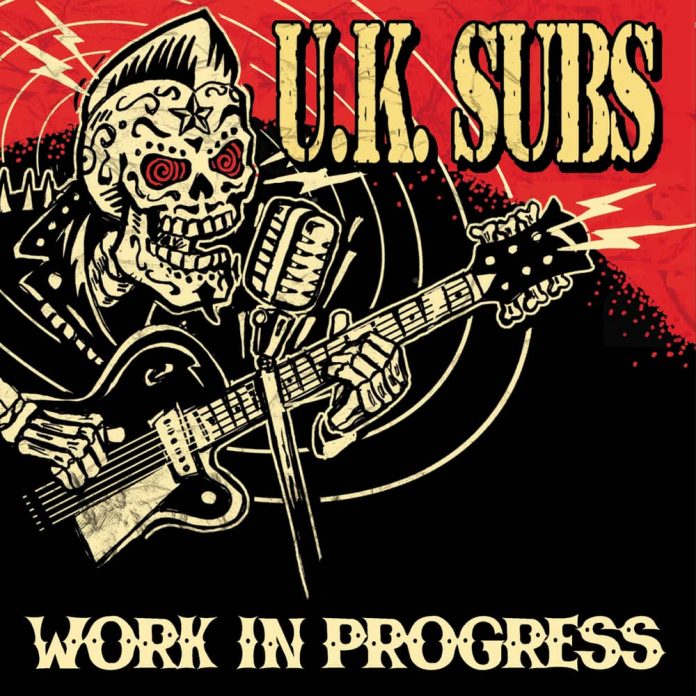 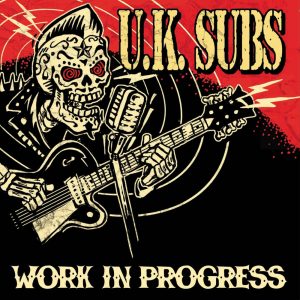 Captain Oi give a UK Subs 2010 album a reboot across a gatefold sleeved double 10″, one disk silver vinyl and the other gold. Nathan Brown says it’s no work in progress and simultaneously modern and a tribute to the roots of punk.

The UK Subs, and in particular front man Charlie Harper, are well loved within the punk rock family. They came out of the first wave of punk, playing at the Roxy, and they have never stopped gigging and recording. When no-one cared about punk any more the Subs were still there, plugging away. Charlie Harper is most certainly a “lifer”.

For many punks, even if they aren’t huge Subs fans they would have spotted this as a reissue based on the name alone. You see, back in 1979 when they released Another Kind Of Blues, the UK Subs started an alphabetical journey (Brand New Age, Crash Course, Diminished Responsibility…etc) which they completed with Ziezo in 2016. Captain Oi! first unleashed this album in 2010 on CD with vinyl on various colours (of course!) the following year and even a picture disk version.

The UK Subs have long had an association with coloured vinyl, and it used to be a running joke that if you had a black copy of any of their records that was the rare one. Presenting the novelty of not one but two metallic coloured vinyl discs, this is definitely one for the record collectors and Subs fanatics.

Work In Progress was created slap bang in the middle of a period when Charlie Harper had a consistent line up for over a decade of Alvin Gibbs on bass, Jet on guitar and Jamie Oliver on drums. They famously jettisoned Jamie last year over a sick joke about the death of Tory MP David Amess, to the amazement of most in the punk community. I personally think they made a wrong move there but that’s not the focus of this review.

Far from being a Work In Progress, this album stands as a polished artefact of the UK Subs during a particularly productive period.  It has the hi fidelity of a modern recording. As ever, it is Charlie’s dulcet tones which make the UK Subs instantly recognisable but on this record they seem to embrace and celebrate the proto-punk and garage roots of punk turning out something that might these days be termed punk’n’roll.

Creation opens the album with an anthemic uplift before Charlie warns “beware false prophets” and the band settle down to what they do best. Mid paced punk rock. A blistering solo from Jet plays out the song to seal the deal. Next up Tokyo Rose is a slightly more sedate chuggy number with build ups and a singalong chorus. It’s a catchy chorus that sticks in your head and I recall hearing live on several occasions. Midway through, a bass run and guitar solo evoke their mates Rancid, who they taught a trick or two. Jet plays out the melody on a single guitar string before the song grinds to a halt.

Somewhat jerky and choppy, Hell Is Other People is the sort of tune that best defines the Subs. The repetition of the chorus towards the end goes through several tempo changes and some solos before fading out. This is perhaps the stand out song of the LP.

“Woah oah” starts the football terrace style chant at the start of The Axe, each line being punctuated with a catchy little hook. It’s got that “death comes to us all” vibe to it – we are all levelled when The Axe comes down. More upbeat and driven by a Ramones style riff, Radio Unfriendly tells of the trials of finding something worth listening to, and hints at a solution: Do It Yourself. The backwards glance at the roots of punk figures with a hint of psychedelia in the middle 8.

This Chaos is the next tune and was co-written with Lars Fredriksen but doesn’t stand out as massively different from the Subs canon. Declaring the world “they call civilisation” as chaos, it asks what sort of future we have with progressively diminishing freedom. If only in 2010 we could have predicted where we’d be now!!  With another cheeky guitar line from Jet, Guru is a very rocky number decrying the falsehoods and ripoffs peddled by all manner of gurus. It’s standard punk fare really to mock the fools who follow religious leaders yet sometimes you’d think punk itself was a cult!

On Eighteen Wheels, Charlie gets to indulge in his dream of driving a big rig and being a “highway man” – nice play on words. A sleazy tune that draws on rockabilly and garage in a way that will get fans of the Cramps excited, complete with an echoey guitar. It’s pure unadulterated punk’n’roll cliche and you can tell it was great fun to write “some drive up to heaven, some drive up to hell. I’m on highway number one, there’s no-one here to tell”.

Children Of The Flood is an apocalyptic chugging warning of impending rising sea levels, rising population levels and political inactivity. Again, things look far worse now than they did 12 years ago. A rocky wah wah accentuates this tune.

Adding some variety, the verses of drunken tale All Blurs Into One are like a melodic interlude that is almost indie or post-hardcore with its jangle and snappy stops. There’s another nod to psychedelia. The choruses are heavier in a more traditional UK Subs style. Meawnhile Blood follows more of what I would term a standard solid Subs sound. The boozing and rocking theme with the catchy chorus “Blood on my guitar” is fairly cliched but I think Charlie earned his pass to indulge himself and have a bit of fun a long time ago. He’s been living the rock’n’roll lifestyle since 1977!

Rock N Roll Whore has a chuggy start and borrows Ramones/Heartbreakers riffage. The Subs might have chosen a different title and leading lyric these days and I confess I find it a little uncomfortable. The term whore will raise a few eyebrows. as will the line “She gives out pussy galore”. It smacks of a playful smirking schoolboy rhyme rather than out and out misogyny and the song appears to be a tribute to a mythical rock’n’rolling woman from outer space. She is alternately “so hard core” and “she’s done it all before” and they seem in awe of her rather than punching down and maligning her. Rather than damn him, I’d be inclined to allow Charlie some poetic licence in much the same way as we afforded Lemmy over the years. I know some folk will disagree.

In keeping with the way they dip into garage sounds elsewhere on the album, a version of The Sonics classic garage punk hit Strychnine is a great tribute. Charlie’s recognisable delivery works really well. A perfect match. No frills required!

In 1980 the UK Subs were worried about a Brand New Age. Thirty years later we were entering the Robot Age, the name of the last track. Reminding us that “God did not make man. Man made god”, I guess the message being that we create these problems for ourselves – humans make robots in our own image. Since this song was written Artificial Intelligence has got a damn sight scarier with killer robots and drones no longer the stuff of science fiction. It’s a driving repetitive number with a wah wah dominating the middle 8. It’s the final nod to the roots of punk in garage, psychedelia and proto punk.

If I were to pick a highlight, it would probably be the catchy Hell Is Other People. It is now so familiar as a staple and favourite in their live set that it could have been from one of their early albums. When you consider how many albums the UK Subs have released its amazing to think that it is their live performances which are their staple offer. Tokyo Rose also comes close as a memorable live tune.

The cracking cover art from Vince Ray fuses Day of The Dead, rock-‘n’-roll and tattoo styles and is set off with the perfect font. It sits well with the overall punk’n’roll feel of the album, plundering the aesthetics of garage with a definite twang. One for the folks who didn’t get it first time round or one for the collectors.