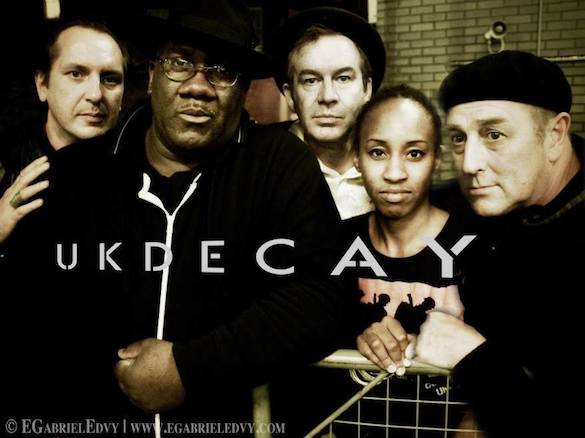 UK Decay frontman Abbo speaks to Louder Than War about football and small town life as the band release their brilliant new EP.

Louder Than War favourites UK Decay have just released a new 4 track EP, Wonderful Town, that celebrates both life in the small town and Luton Town FC’s fantastic season that looks set to finish with promotion back to the Football League.

The band’s frontman, and avid Luton fan, Abbo took time out as he was heading to their game with Braintree to speak to Louder Than War about the idea behind the record.

“Wonderful Town’s been written for a while now, but it just seemed the right moment to release it. In somewhere like Germany it wouldn’t be unusual for a band to release a football related record, but it’s a bit different over here.  We also thought it would be quite funny to do a punk version of ‘Bring Me Sunshine’, the old Morecambe and Wise classic. Eric Morecambe was a legend and I can still remember seeing him entertaining kids at Luton, he was hilarious!”

Abbo was keen to explain the impact of Luton manager John Still and his philosophy on Luton’s season. “John Still has been great and his views about things like ‘controlling the controllable’ and not having stars but a team make a real difference. He’s also brought in an invitation to fans to join the post-match huddle which I was lucky enough to experience a few weeks ago, it was one of the great moments in my life! “

Turning to the theme of growing up in a small town, which many of us can relate to, Abbo explained how Wonderful Town can apply to any similar place. “I left Luton at 18 but I’ve always considered it home. I had a perfect childhood growing up there and feel a real positivity about the place. I find it a great comfort to imagine my father and grandfather walking down the same streets as me. That’s actually where the idea of the song came from; I was walking back to the station after a Luton game and there’s still a lot of the old place left, even though some of the buildings have been knocked down, and I just started thinking about people in my family taking the same journey. It’s basically about having a pride in where you come from and it certainly prepared me to go out into the world and gave me a set of values. To be honest, I didn’t really know that racism even existed until I left Luton and that’s a massive tribute that I can pay to the community that I grew up in.”

Anyone who’s had dealings with UK Decay will know how keen the band always are to offer support and encouragement to others and this is again seen with the recording and release of Wonderful Town. The band used local recording, design and pressing facilities and the Luton Town first team squad join the band on Bring Me Sunshine and Hatters Hatters. All proceeds will be split between two local charities, Luton Foodbank and SoLYD which helps to fund Luton Town’s youth development.

“Football clubs at our level are still hugely important in their communities and Luton’s ground couldn’t get much closer to the community really as it’s right in the middle of a load of houses. Obviously the song is about Luton but it could apply to many similar places across the country. Maybe it’s an answer to the common assumption that people want to grow up in cities with all the benefits that offers, or even in the idyll of the countryside.”

Even though Abbo wouldn’t see Luton Town promoted that day, they still remain overwhelming favourites to win the Skrill Premier League this season. He also revealed that UK Decay are currently in the process of writing a new album, which is a further cause for celebration and anticipation. Louder Than War will keep you updated with developments on this.

Wonderful Town was released on April 7th and is available to buy on vinyl, CD and download here.

UK Decay head out on the road soon and will play at Georgian Theatre Stockton on Tees, April 25th Whitby Goth Festival April 26th before returning to Luton Hat Factory on May 3rd. More info here.