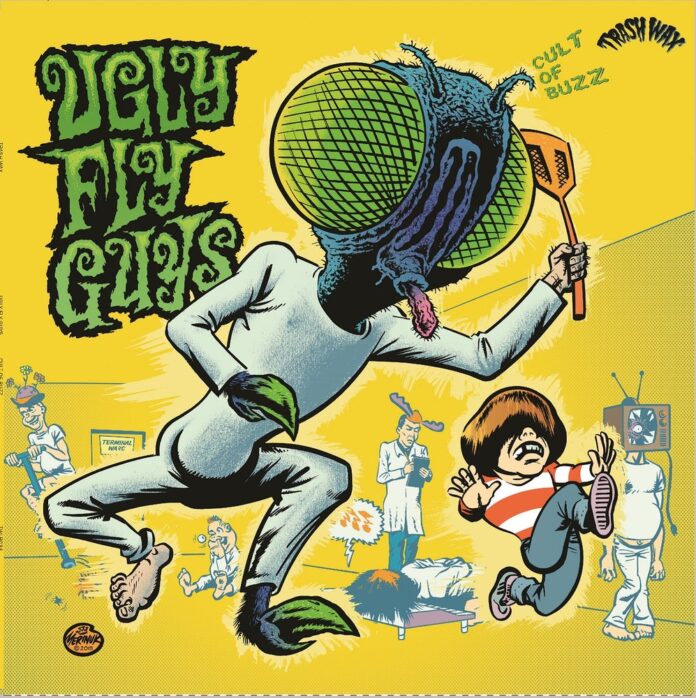 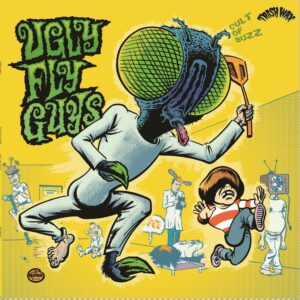 The Darren Merinuk designed cover should be reason alone to grab a copy of this album, if not, maybe the yellow splatter wax is tempting you – still not enough? Then you realise it has been released via Trash Wax Records.

What? You want to know what it sounds like??

How’s about 14 tracks of demented, pure bad to the bone trash, complete with throat rippin’ hollers, guitar riffs that slice flesh and weird other worldly keyboards that was all captured in one day recording session.

Opener ‘Cult Of Buzz’ is a frantic rallying call, scuzzy guitar set to stun, down tuned bass that throbs deliciously, and all the while this weird B-movie sci-fi keyboard wails alongside gravelled vocal barks; similarly ‘Ain’t Got No Soul’ which has familiar rockabilly rhythms that hark back to all those gems on the Born bad series; yet Ugly Fly Guys manage to inject something new into the mix – it’s the keyboards courtesy of the suitably named Ruby Morgue that weirdly arc back to those 60’s Farfisa sounds yet reach forward into uncharted territories.

The low slung bass that powers ‘The Man Who Wasn’t There’ – this thing purrs like a salivating BOP V8, whilst ‘Freak Amongst The Freaks’ has a distinctly chic early 60’s vibe, its like The Cramps playing a soporific induced Strychnine, with The Primitives in the next room, as Ms Bardot gyrates to your delight.

Flip it over and straight into ‘Bug In My Brain’ – a mid-pace garage trash scorcher, heavy on melody and guttural yelps which sets up nicely for ‘Uh Uh Oh Yeah’ which rolls along Meteors style complete with rabble inducing vocals. The octane fuelled ‘Razor Blades And Broken Glass’ is a fuzzed out mosh pit thrash, the bodies will be flying as this one rattles out of the speakers.

Should Steve Jones ever hear ‘Head On A Platter’ he would assume his Pistols songbook had been stolen – which would be somewhat ironic, but this one borrows the infamous ‘Pretty Vacant’ riff then distorts into a keyboard noise that made me think of Mission Of Burma ‘That’s when I reach for my revolver’ – it really is that bizarre… but really good bizarre. Likewise, the closer ‘Don’t Need Somebody’ a warped cover of Jefferson Airplanes’ Somebody To Love’ – somehow Ugly Fly Guys have taken the Haight-Ashbury psychedelia of the original and mutated it into a trashabilly gem.

Ugly Fly Guys are without doubt a loveless gathering of miscreants, but they sure do have a talent for primal, howling rock – there is much to love about this album!