Home Blogs U2 new album soon – can they grab victory from the jaws... 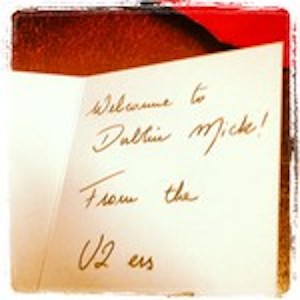 There has been some talk of the new U2 album coming out this summer as the band have finally finished their 13th opus.

Whatever you think of U2, it’s quite remarkable that the same line up has stayed intact since they appeared in the haze of the post punk era as just another bunch of post Joy Division noiseniks before turning themselves into the ultimate stadium band.

They were always the band easiest to take pot shots at- god knows (and in this case he really does) we have had a couple of attempts ourselves and they do leave a wide open goal to shoot at but there is a grudging respect for their music that does have its moments even if the posturing can get get a bit too much.

And they do seem to be getting the last laugh, if they wanted it. Whereas most of the their contemporaries who sneered at them have fallen out or make a living by playing their two and half hits, U2 are still in the odd position of being a huge cultural vacuum that still sell out stadiums and could be a potential cultural force that can still talk about their upcoming 13th album as having some sort of relevance.

They could sit back on their laurels and coast it to the finishing line but there still seems to be some sort of creative spark in the band and an attempt to appear ‘relevant’ whatever that is in these times of musical mush mash and no true focal point,

Hiring Dnagermiouse to produce the album was an interesting move, as he gives a twist to the pop sheen without losing the commercial edge (ha!) and it at least proves the band still read about what’s going on out there or could it be market research gone mad?

Oddly, though, the period they came out of – that much fetishised post punk period is perhaps their one true strength- with their early records oddly sounding more contemporary than they should and in danger of sounding more now than anything they could possibly come up with in that weird way that retro can now sound modern. It’s an interesting conundrum for any long term band with that struggle to avoid the past and the realisation that the past was  THE MOMENT. Post punk now sounds like the future even though it was more than 30 years ago and U2 could do no worse than listening to themselves admits the clutter of modern.

And maybe they have…

As Bono attempted to explain in Hot Press magazine recently…”We went back to why we wanted to be in a band in the first place. Listened to a lot of late ’70s music, which kinda formed our musical taste. That’s when it started for us, with punk rock and actually electronica. So you had The Ramones. We were listening to The Ramones and Kraftwerk. And you can hear both of those things on ‘Invisible’.”

Bono also noted how his band always feel on the verge of irrelevance before releasing a new album.

“We’ll find out if we’re irrelevant. I’m perfectly prepared for people to try and blow us off the stage, it’s the right instinct. It’s just that we’re not going to make it easy for people.”