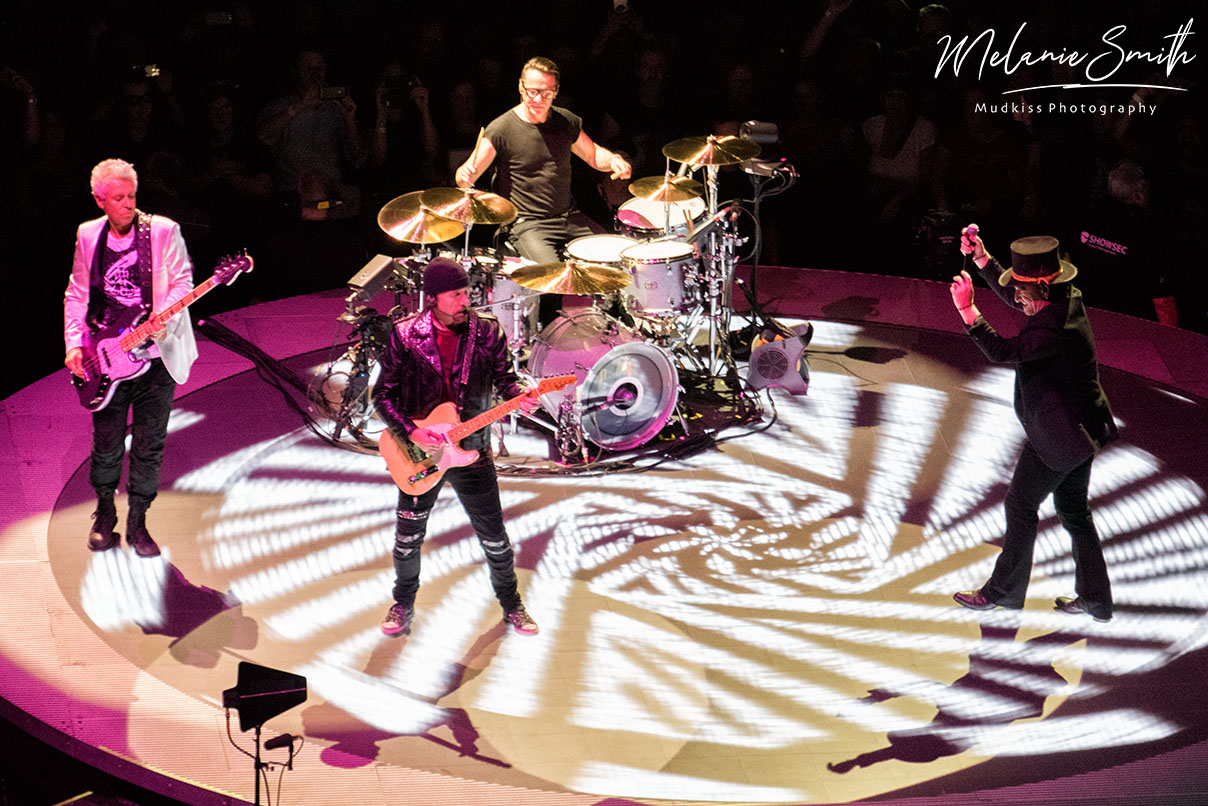 U2 bring their Experience and Innocence Tour to the UK with two consecutive nights at Manchester Arena. Lee Ashworth caught the opening night of the UK tour, with Melanie Smith capturing the images.

Autumn sunlight burns through the increasingly bare trees and the streets of the suburbs are a fiery carpet of orange and brown leaves. Taking the long view, reaching back to the ‘innocence’ of the late 70’s, U2 are in the autumn of their years.  This tour is the culmination of a long and reflective creative process, in fact two such processes, operating, like so much of U2, as wheels within wheels. The meta narrative, played out over the course of the performance tonight, started with the vigour and attack of their youthful beginnings, through their personal and artistic transformation over forty years to what they are today with a rich and varied back catalogue behind them. The smaller narrative within that speaks of their last two albums, Songs of Innocence (2014) and the recent Songs of Experience (2017).

This double release has spanned nine years in total, from initial gestation to the final dates of the current tour, interspersed with another tour of The Joshua Tree re-issue. Nine relatively difficult years amidst much speculation about the album titles and content and the producers associated with various tracks.  At one point tonight Bono thanks the audience for our patience in general and this is understandable – promises of album releases soon often become three or four year gaps between releases as the band search for their own level of perfection. 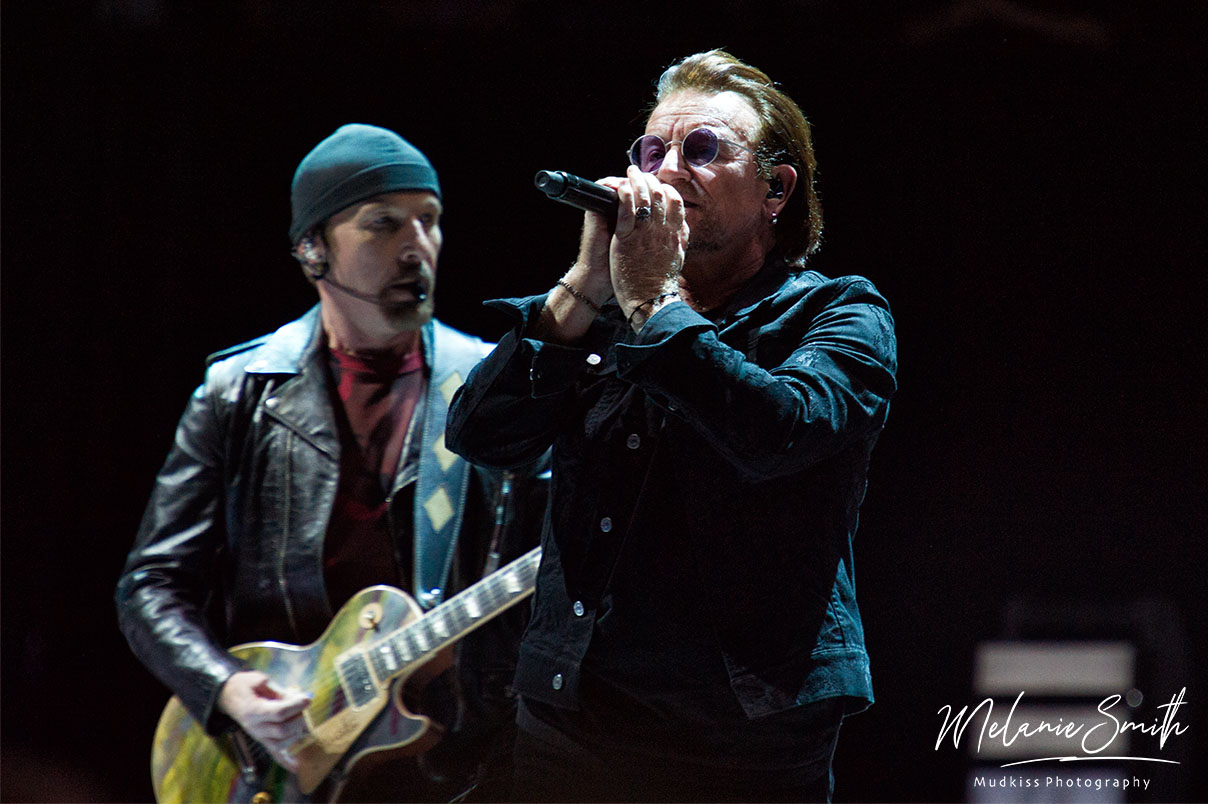 Here in Manchester, the Arena has been transformed by the staging. Described as a concert in the round, the staging is far more innovative than that suggests. An elevated walkway cuts through the central floor connecting one modest rectangular stage with a small, round e-stage at the other end. Above the walkway is the famously cutting-edge screen system, rising and falling throughout the different acts of the performance, encasing and enshrouding the band, revealing them and then rendering them opaque and invisible between the barrage of gigantic images that flood the whole event. The staging is reminiscent of other innovative hallmarks of previous tours – the mirrorball lemon of Popmart, ZooTV and The Claw of the 360 Degree Tour. The Claw and the current stage set are part of an attempt to “make the stadium disappear” in Bono’s words, to bring an intimacy to large scale gigs and to maximise visibility from anywhere in the venue. 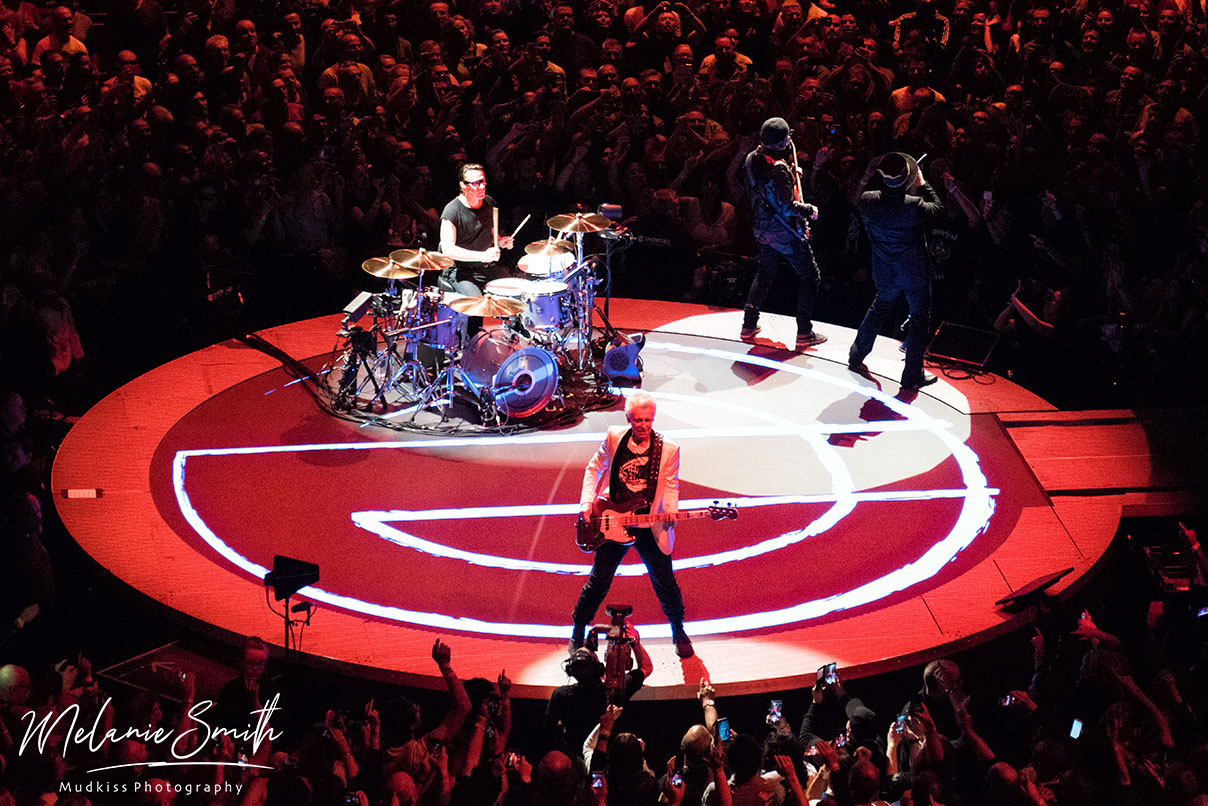 The stage set is a design of genius, structuring not only the presentation but also the performance overall – for that is what this gig is. Theatrical and full of character, it is fitting that the band play a blaze of tracks from Achtung Baby including Who’s Gonna Ride Your Wild Horses, The Fly, Acrobat, Even Better Than The Real Thing, One and Zoo Station. We also get Stay (Faraway, So Close) and a version of Zooropa from the album of the same name that still remains their most experimental release as an official U2 album to date. This is the dark, existentialist introspection that U2 mastered in the nineties, incorporating influences from Dada and Dali to the Situationists. The references to the multiplicity of screens that now interlace our everyday lives, the questionable status of truth and lies and the very reality of reality are all themes that press with increasing urgency on our day to day existence in the years since U2 first flexed their self-critical muscles in the 90s. On the e-stage, an ageing and volatile MacPhisto reappears with tawdry top hat, the power of augmented reality twisting Bono’s visage into an enormous, arena-filling rictus grin, a lipstick smear sliding slack-jawed and wrong through the virtual slap and into the dark depths of 2018. Interspersed with Bonologues, the band are close and tight, exchanging glances of a lifetime’s work together while the frontman flails his arms, ducks and dives and teeters over the lip of the tiny stage, besieged by outstretched phones… U2 are revelling in this; the audience is responding and here is a band enjoying themselves at perhaps the prime of their powers. 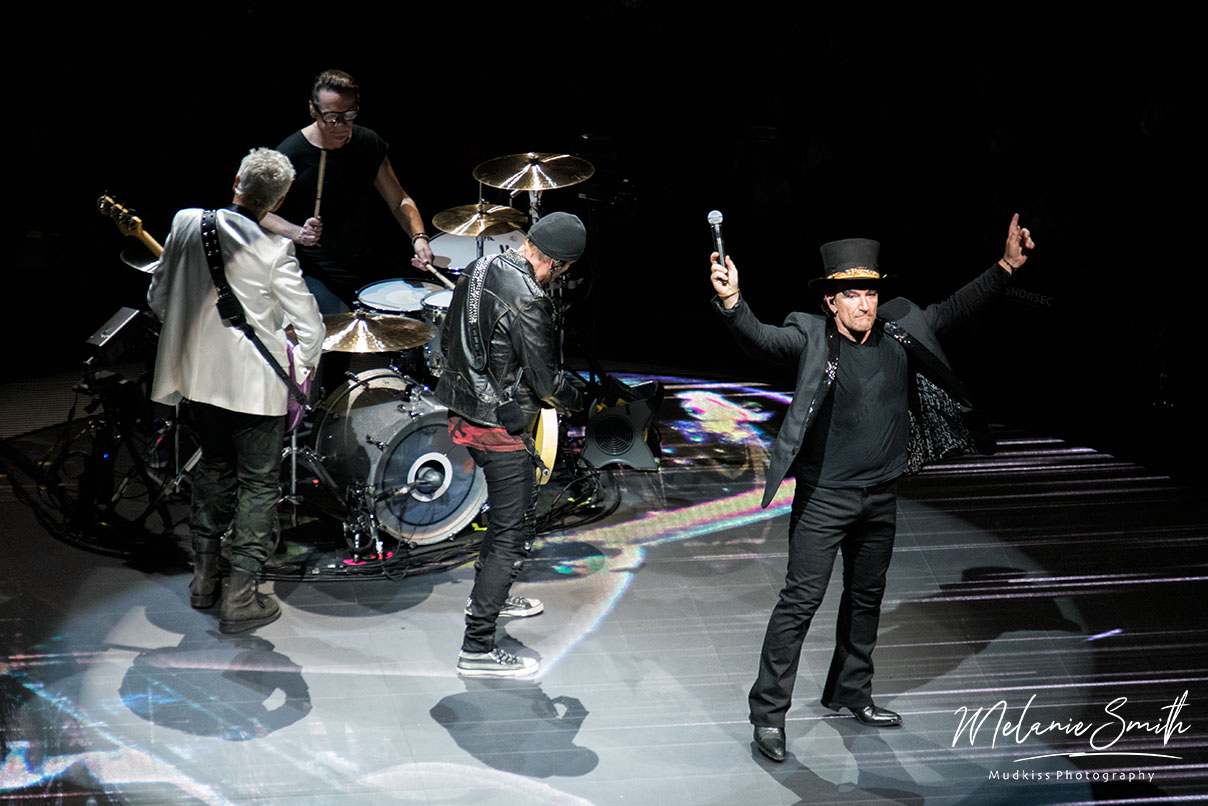 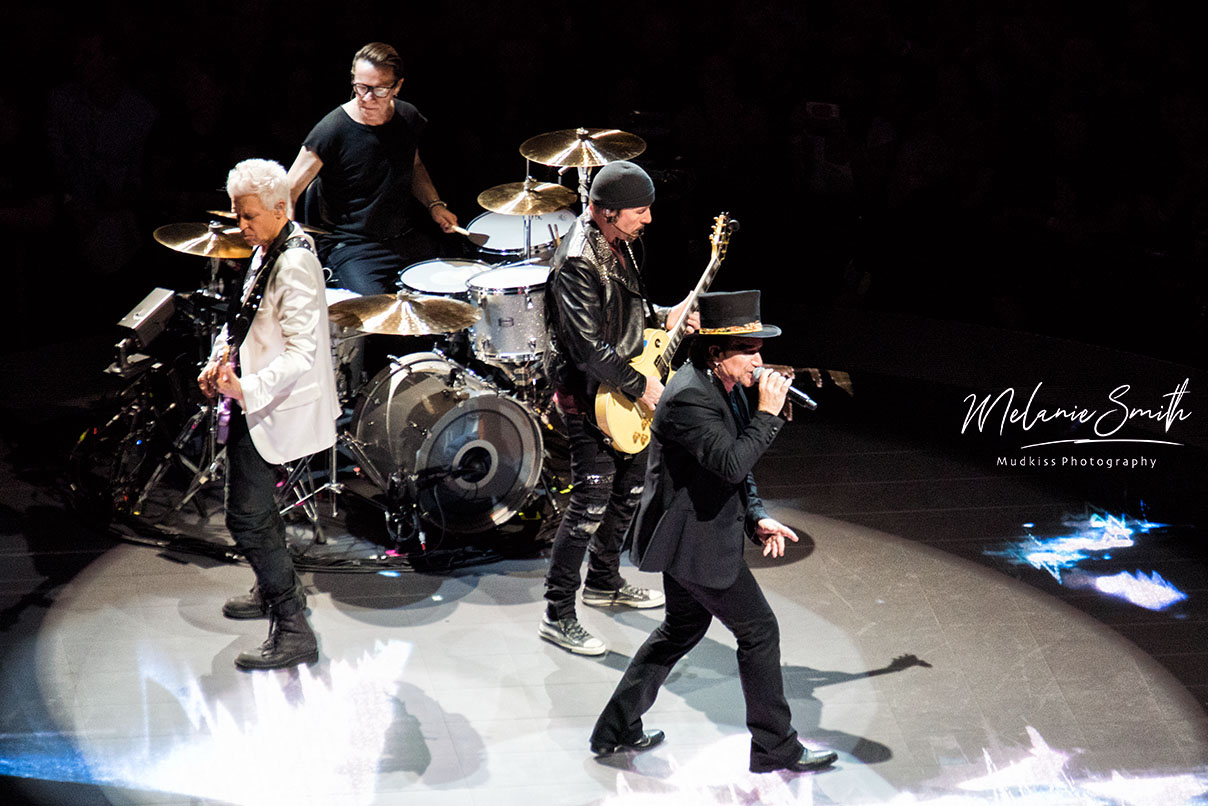 I Will Follow, followed by Gloria, close to the start of the set saw Red Rocks smouldering again thirty five years on and the incandescence of The Edge’s soaring guitar lines are accompanied by my anticipation of every ad-hoc utterance from Under A Blood Red Sky. The Edge is as understated as ever. The least flashy of guitarists, he has evolved from the identifiable licks of their post-punk roots into the consummate sonic architect, the member of the band who most epitomises Eno’s assertion that he foresaw their music as cinematic soundscapes eschewing any evidence of four separate people playing their isolated instruments in time with each other. Eno’s creative involvement with the band, as a kind of fifth member, is hard to overstate and certainly still stands as the fulcrum of the evolutionary path they explore and reflect on explicitly tonight.

Whilst there are only so many songs possible in any given set, it is a shame that there are not more present from the recent post-Eno years. But the most moving part of the set is a new version of New Year’s Day, revved up, intensified and sung after a slightly restrained Bonologue on the prospect of Brexit. Behind the band, Peter Saville’s enormous banner of the EU flag appears with a crudely drawn heart around the star coloured red, white and blue. “Though torn in two, we can be as one” sings Bono, having earlier spoken of a UK never so interconnected through technology yet at the same time so divided. 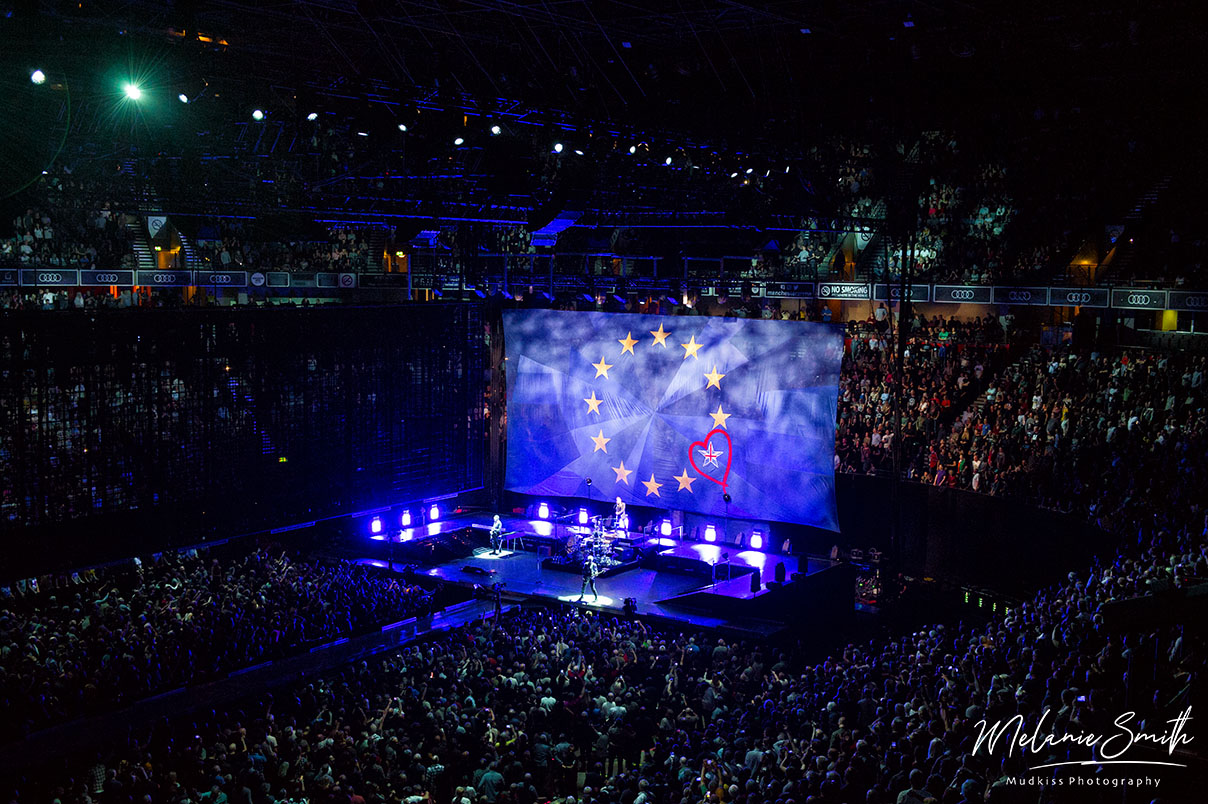 U2 have grappled with the ways in which increasing technology, screens and stadia have threatened to thwart the USP of a band who pride themselves on their ability to connect, directly and passionately with the world and their audience. On the evidence of tonight and a whole lifetime of listening and watching their music, they find a way to harness the medium of their message to evolve and build on their own creative force.  U2 maybe in the autumn of their years but the sky is still blood red, from Red Rocks to Manchester, tomorrow and beyond.

Here’s the video for their recent single, Love Is Bigger Than Anything In Its Way