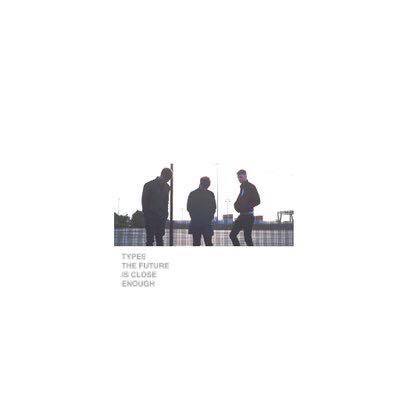 With its working class playing such a huge role in the City’s musical history, it’s surprising how few of Manchester’s contemporary bands seem interested in the current social and political climate of the UK. And though there are a handful of bands with left-leaning tendencies, Cabbage for instance, they’re often overtly brash in their sentiment, all bark if you will. TYPES are an exception to this rule.

Though the band’s debut LP, The Future Is Close Enough, is nothing short of desolate, its delivered with an intelligence and elegance that somehow makes the inherent despondency undeniably appealing. Opening with ‘Untitled Building Society Introduction’ an aesthetic is established that’s as hauntingly ephemeral as it is dauntingly imposing; walls of electronic noise merge seamlessly with a vocal that’s more texture than tone, immediately setting the mood for what follows.

Continuing with a trio of tracks in the form of ‘Overhead Power Lines’, ‘It’s Like A Morgue Here’ and ‘Mild Learning Difficulties’, there’s little relent in the record’s sombre atmosphere. Interested predominantly in the commercial greed inherent in modern society, TYPES’ self-styled ‘post-post-punk’ is the perfect soundtrack to their downtrodden narratives; a reflection of broken Britain deftly articulated.

Not until the halfway point does the record offer any sort of optimism. ‘K-Wave’ floats in much like its namesake drug; masking the despondency it proceeds with a woozily narcotic cloud, providing welcome respite from the rest of the record’s desolation.

A release in which the appeal is as insidious as the politics of those of which its ire is aimed, The Future Is Close Enough is a record that stays with you long after its haunting close. Far from an uplifting affair, its dystopian delivery hits hard and burrows deep; a bold first outing for a band with more than commercial success on their mind.