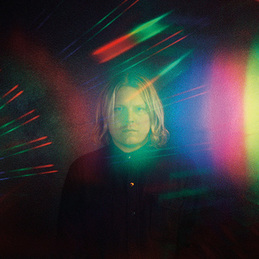 Garage wizard Ty Segall takes a left turn on new album Harmonizer and delves into the world of synths with great results.

Sometime’s there’s only so far you can go in one direction before you burn the map and draw a new one. Over 11 albums, Ty Segall had established himself as one of the best purveyors of cranked garage rock, standing proud alongside the likes of Osees in terms of both quality and output. His 2012 album Twins ramped up the velocity, spat out a sludge fuzz warp and stands out as probably the highlight of his career so far. Nine years on and he’s decided to, almost, hang up his six-string in favour of a deep-dive into synth experimentation. It’s a left turn for sure, but one that sees him travelling a parallel road, the direction still ultimately the same as the album undeniably makes sense in his own idiosyncratic trajectory. It’s oxymoronic, a gem dug straight from the ground and still to be polished. Futuristic and yet all the time degenerating, decaying.

It’s in that decay, sonically speaking, that he finds his feet. The sound of Erased is just that. Modulated vocals push through while being held back, tethered by a pulse while a high-pitched whine of a processed to infinity guitar warps from ear to ear, a spider circling a trapped fly. “I end at the beginning. I am learning how to crawl.” sings Segall. The phrase says it all. He is plotting new lines, routes previously untrodden by him. The guitar is no longer the king, but rather a slave to his new master, one to be broken and pieced together to create something more abstract, while simultaneously crafting one of his most accessible albums.

Feel Good, featuring his wife Denée Segall on vocals, is one of the stand-out tracks. After a blast of frantic guitar, it drops into a funky playful groove setting itself apart from the sludgier moments that define the majority of the album. The title track probably embodies his concept the best. The beats, though spare, whip in while the guitar is a deep and distorted constant behind everything. The song provides the perfect meeting point for the two sides of Segall’s mind, the bridge between the guitar and synthesiser, the two combining to produce a futuristic stoner sound that pegs the album to his earlier work.

The track that follows, Picture, brings the concept into a new focus. The guitar and synths, split into separate channels no longer work as one but rather fight against one another for supremacy. Your attention is pulled one way, back across, left to right as sounds suddenly jut out, his fuzzbox pushed to breaking point. It’s the midway point on the album, on Ride, where the synth finally reigns over everything. The song drones and floats on a dark wave, eschewing the crazed sonic assaults and wizardry of much of the rest of the album.

Harmonizer is a great coming together of two disparate sounds. “New shapes exist in me” Segall sings on album closer Changing Contours. He’s finding his way through his new world, exploring the crash of sonics that comes with laying down your preferred tool to push against your own boundaries. Time will tell if it’s a shift that will stay with him and, with his work ethic, we’re unlikely to have to wait long to find out.