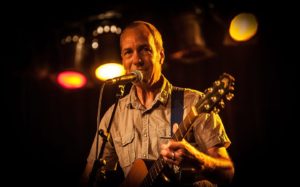 US indie rock legend Chris Cacavas will be coming to the UK in December to play two, very rare, solo shows.

Cacavas – a founder member of Green on Red, and a current member of The Dream Syndicate – will be visiting The Ginistry in Oxted, Surrey on Sunday 8th December; and is then at The Slaughtered Lamb in Clerkenwell, London, the following night, on Monday 9th December.

Cacavas first rose to fame as a founding member of Green on Red, who were allied to the fabled Paisley Underground movement of 1980s Californian indie rock. In the band, Cacavas’ charteristic frenetic, quivering organ sound – coupled with Dan Stuart’s and Chuck Prophet’s driving, jangling guitars –  provided one of the defining features of the seminal first GOR albums.

Following his time in Green on Red, Cacavas embarked on a highly productive and acclaimed solo career, either on his own or with his backing band Junkyard Love. He produced a string of superb albums, including ‘Pale Blonde Hell’, ‘Self Taut’ and ‘Love’s Been Discontinued’. His Americana-tinged folk-rock songs, delivered with naked emotion and honesty, have garnered favourable comparisons to Neil Young (and indeed he appeared on a Neil Young tribute album in the late ‘90s).

Tickets for both gigs, as well as all information, can be found at wegottickets.com/oxtedsessions