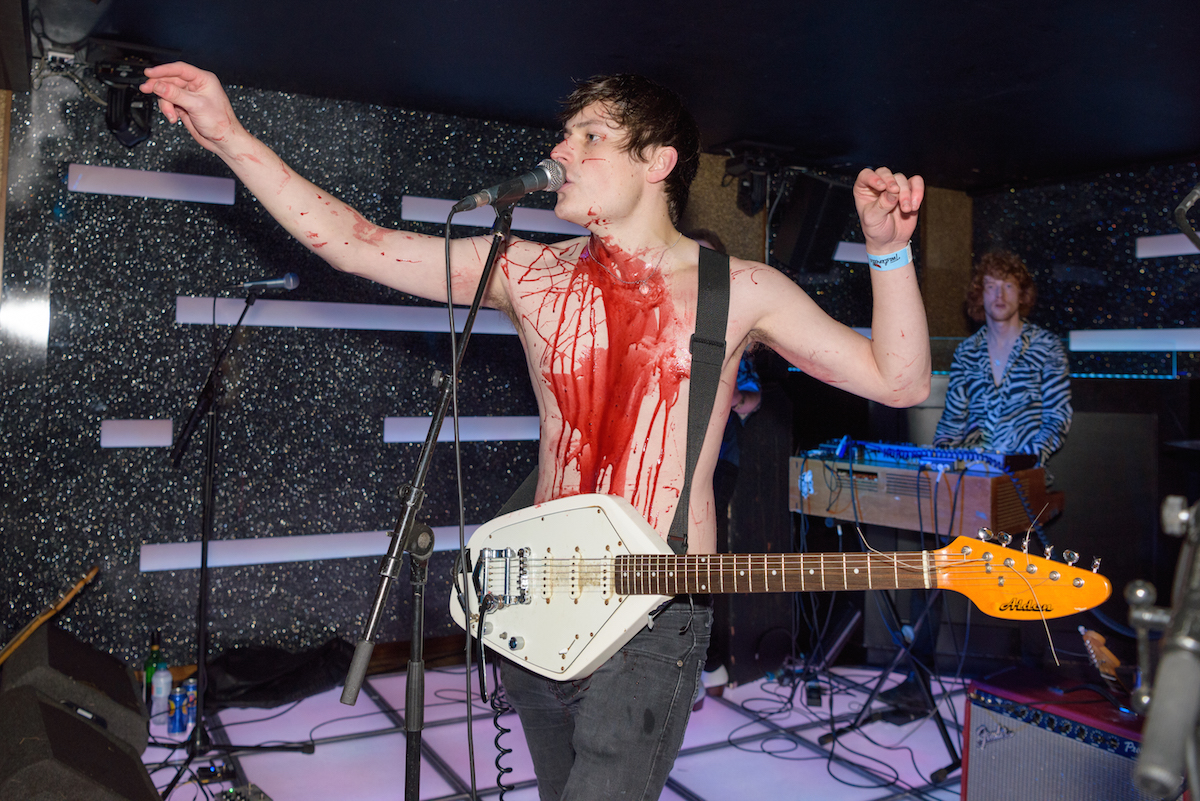 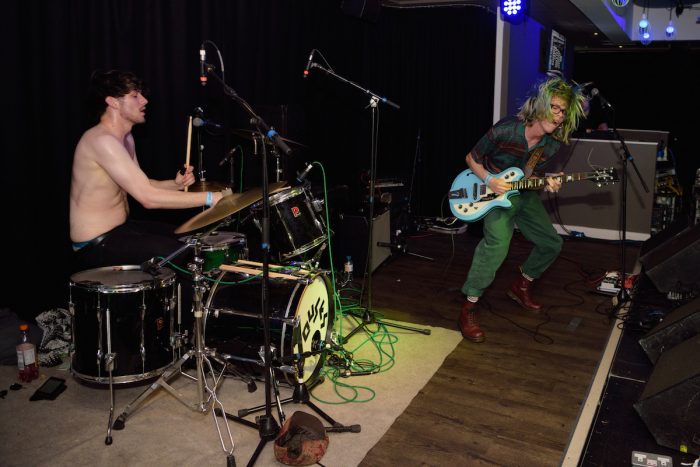 Another fine instalment of Middlesbrough’s finest festival, with an all encompassing line up we have an absolute ball checking out so many incredible bands both old and new.

It’s early afternoon in Middlesbrough and there’s an excited hum around the town centre and there’s an early set from reverse headliners Clean Cut Kid. Unfortunately, due to traffic on the way down we miss the early part of their set, and have to head on to catch personal favourites of ours Tough Tits. The aforementioned enthusiasm is certainly being channelled through this early set. 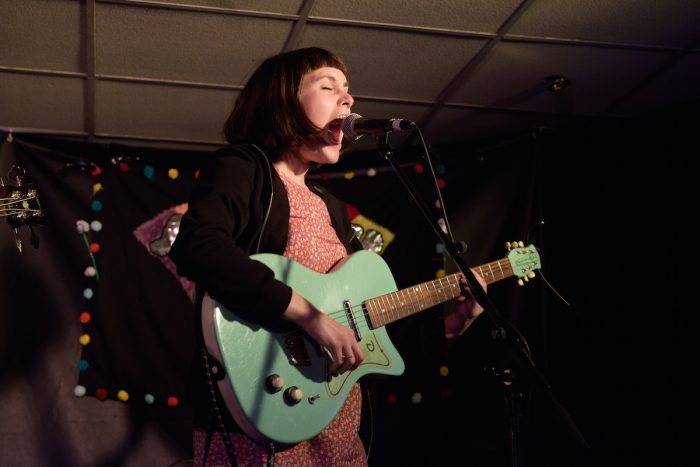 A packed room greets Tough Tits as they shout their way through a powerful set, they’re a band who’ve come so far so quickly. Rightfully garnering praise across the board, their angst ridden songs blow the roof off this small room as it becomes increasingly difficult to move in the room. They set the day off to an energetic start blowing any early cobwebs away.

A Festival, A Parade take a slightly different tone, their soaring soundscapes, powerful riffs and dynamic performance. Newest single If Dogs Could Talk goes down a storm, and once again this small room is teaming with people. A Festival, A Parade once again proving why they’re one of north easts best kept musical secrets, but I doubt for long! 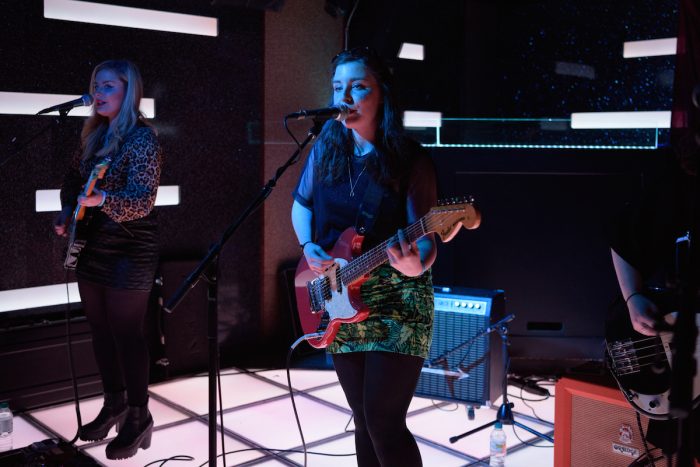 Glasgow’s The Van Tees take to The Townhouse stage next, previously we were left slightly cold by these Glaswegians and unfortunately it is the same again today. They’re filled with energy and riffs but it all feels too similar to the majority of other landfill bands; they lack any originality as they fall into the cacophony of everything else.

After a short break we’re back for Drifts who are in ferocious form as they tare through a fiery set of sharp post punk tracks, Ross Millard’s unmistakable vocals lead the charge. Sharp riffs and pounding drums underpinning these sharp tracks, a fine set from these guys who are by far one of the tightest bands on the bill. Their fierce performance re-ignites the fire after our short break. 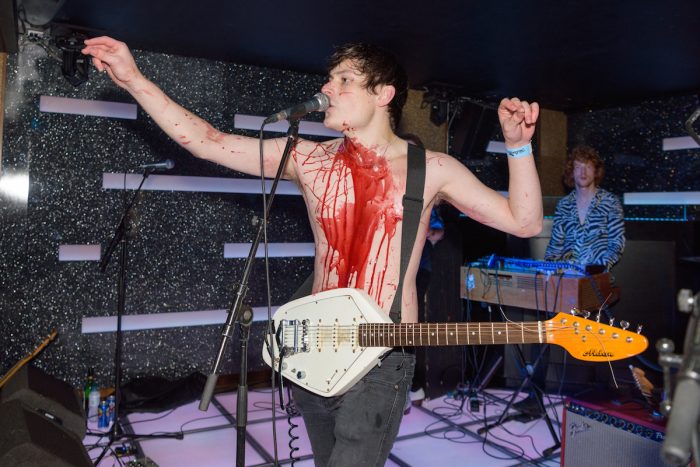 Fortunately, the momentum is sustained as we head over to see one of the bands of the day, Avalanche Party have long been one of those bands have caused me great confusion. Tonight is no different, front man Jordan takes to the stage doused in fake blood, immediately launching into this driving set. Huge garage rock riffs, underpinned by visceral bass and drums, there’s a manic nature to their set.

Jordan taunts the crowd as they respond in kind, the bands unbridled passion pours from their tracks. Increasingly Avalanche Party are moving closer to their American counterparts, channelling the madness of Ty Segall and Thee Oh Sees. The confusion comes as to why these guys aren’t one of the biggest bands in the country, they have it all so go and check them out.

From one incredible band to another, and having previously not been announced to play at all Mouses are actually set to play two sets today. The first is in local bar Sticky Fingers, the nature of Mouses music wouldn’t usually translate all that well into an acoustic format. However, it really does their heartfelt garage rock noise stripped back to it’s rawest form sees these songs take on their truest meaning and adds another dimension to their sound. It’s really refreshing and the main event is still to come! 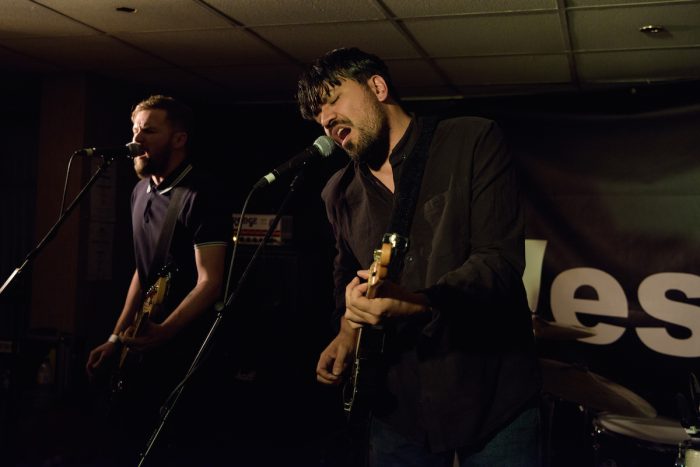 Norwegian’s Beezewax are next to take to the smaller stage at The Westgarth, their highly charged indie pop is well received with the room fit to burst again. Passionate lyrics coupled with raucous riffs, make this set one of the highlights of the day. With so much going on it’s almost impossible to take it all on but both Beezewax and Avalanche Party stop us in our tracks and completely blow us away today. 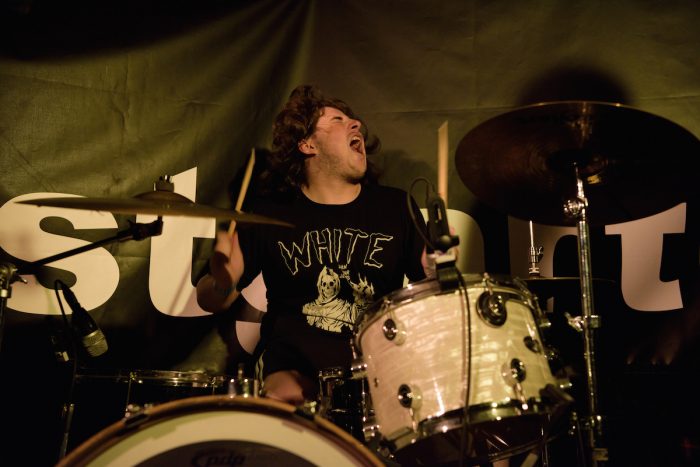 Forever Cult are always to be relied upon to put on a good show, today is no different bastions of the latest grunge movement they spark up the energy reserves in everyone in the room. Almost immediately they have everyone bouncing along, the band feed off the crowd’s fervency it’s yet another exceptional set.

Despite all of this upbeat excitement there are one band set to bring the tone down, as Kingsley Chapman & The Murder are primed and ready to take to The Townhouse stage. Their effervescent front man grabs his microphone and proceeds to reduce this packed crowd to their knees. His passion and angst exuding from every one of these macabre tracks, swigging red wine from the bottle between each. 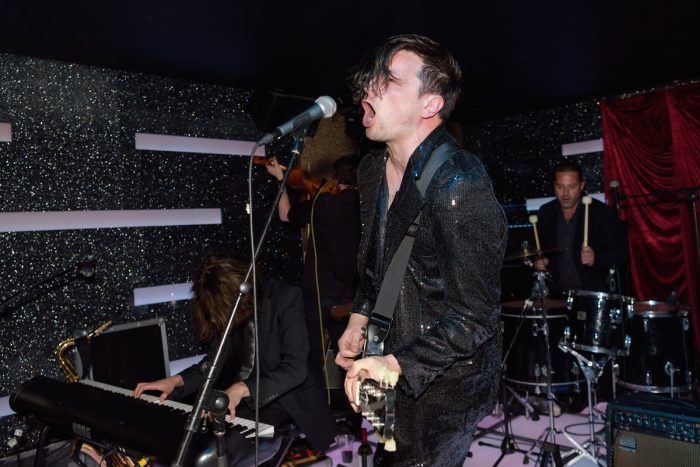 Once he is set free of his guitar in the latter part of the set Chapman taunts the crowd, rightfully compounding his place as one of the North Easts finest front men. Where so many others were excitable, Chapman tares through with unbridled intensity and urgency. He wears his influences firmly upon his sleeve but adds his own individual twist, all culminating in this incredible set.

From one headliner to another, Glasgow’s WHITE are firmly on the up with radio ready upbeat pop music, the likes of Living Fiction will be chanted a long at festivals across the country before long. Having been described as somewhere between Talking Heads and LCD Soundsystem, it’s no surprise they’re heading for the big time. Compared to what has gone before them though they lack the wow factor today. 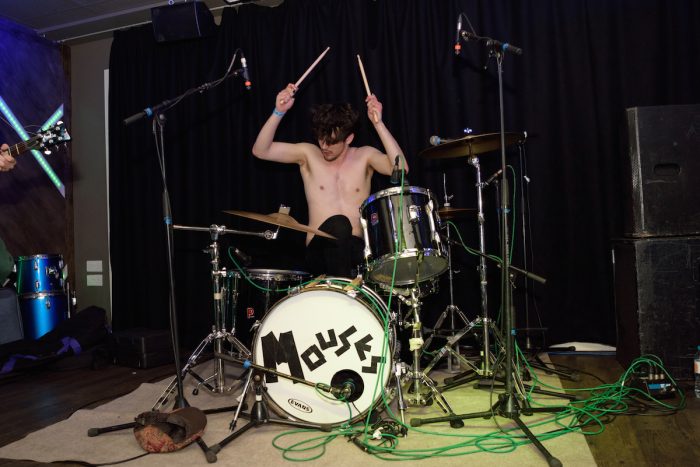 However, Mouses second set of the day was further proof that the regions bands are truly holding their own right now, after a recent tour the band on an understandable high. Tonight they step in for fallen headliners Lisbon taking the coveted spot at Teesside University Student’s Union, from hearing the tracks in their rawest form earlier in the day.

The evening set allows this duo to truly unleash, it’s yet another jaw dropping set as drummer Nathan once again shows off his prowess behind the kit. Whilst Ste jumps around the stage like a jack in the box, there truly is no stopping this duo, their energy is boundless, their excitement undeniable and most of all their music is brilliant. Showcasing many tracks from their debut album, the likes of Psycho and Poison are further proof that Mouses are one of the North Easts finest.

Bands and artists from all over the UK and beyond came to this years Twisterella producing an inordinate amount of highlights, but what this festival also served as was proof that once again the North East music scene is on top of their game. From Tough Tits to Kingsley Chapman & The Murder, Mouses to Avalanche Party everyone brought their A game and put on an incredible show.

The festival itself was brilliantly ran as always with minimal delays making all of the clashes even more heartbreaking. The line up itself was as wider reaching as ever, with so many styles and genres represented. It was a true celebration of music in such a variety of forms, and every year it leaves us feeling invigorated and impassioned and ready to do it all again next year!