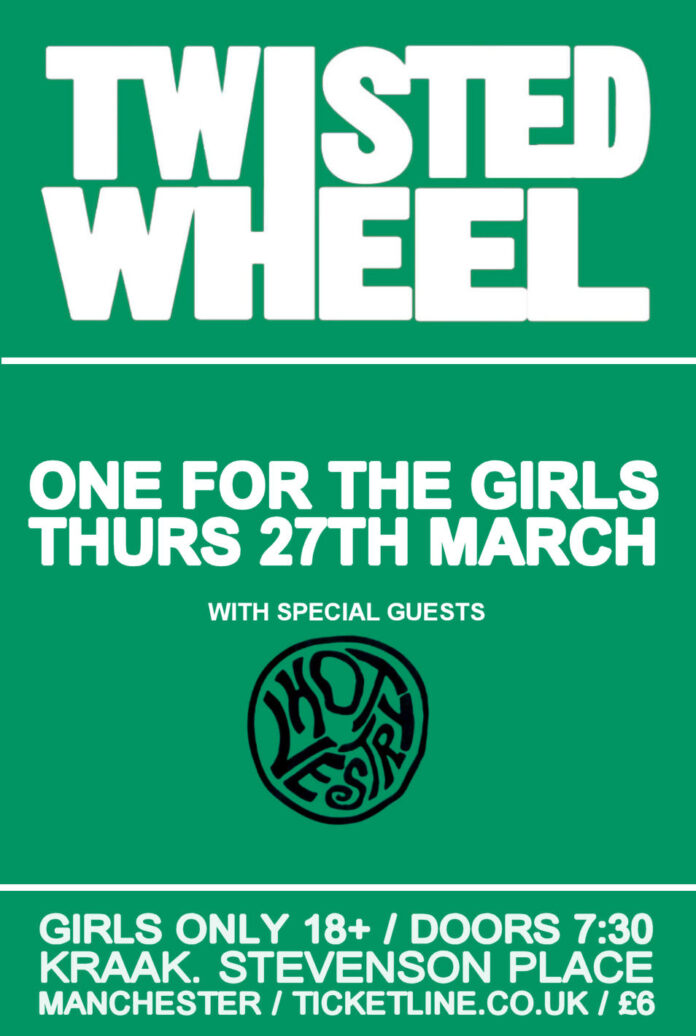 Win tickets for this very special gig…all you have to do is go to the Louder Than War Facebook page and in the comments section tell us which northern town Twisted Wheel are from.

LTW faves- the rekindled and back on fire Twisted Wheel have been playing some remarkable shows recently- combining the firebrand rush of the early Clash with a northern swagger and a tuneful sensitivity this is one of the best live bands out there. They are playing a run of shows at manchester Kraak gallery at the end of  march. 8 sold out nights and new one that has just been announced- a girls only night- which is a pretty cool idea…

Got to ticketline.co.uk for tickets. Go now as this will sell out fast- like all their other shows…

Twisted Wheel  – One For The Girls
Thursday 27th March
Tickets £6

Kraak
Strictly over 18s and GIRLS ONLY.
Doors 730pm

Strictly over 18s and GIRLS ONLY!
‘Most Twisted Wheel gigs involve rambunctious lads, flailing elbows, flying beer and stage invasions  and, don’t get us wrong, we absolutely love it! But just this once we thought we’d play a gig just for the girls. Less Lynx Africa more Chanel No. 5.’ 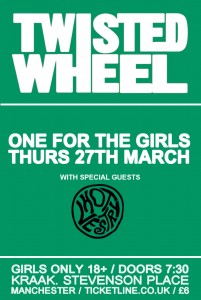 1. why the girls only gig?
jonny: we were talking about gigs and what would make one stand out – not just for us but for the audience too. It was an important part of The Kraak Sessions – one night playing both our albums, in order, track by track. Another night is for our fans who are under 18 – if you’re 16 you are allowed to go to quite a few gigs but you’ve never got £15 or whatever they cost, so ours is £1.50
Blair (drums): And you get a free CD and a badge!
Jonny: So, yeah, it got us to thinking that we could use this venue and connect with the people in our audience that sometimes get overlooked. I remember hearing about a girls only gig that Eagles of Death Metal did about 5 years ago and it was always at the back of my mind. After the Gorilla gig a couple of girls tweeted us that they lasted 2 songs down at the front before it all got a bit too much with flying elbows and lads shoving each other
Max (bass): That’s not to say that’s not something we love. It always looks like mayhem from where we’re standing but we thought it’d be interesting to see what it was like without all the…..
Adam (guitar): testosterone.
Max: yeah, that!
Jonny: it’s more about who’s coming rather than who isn’t. It’s positive not negative. Plus, who wouldn’t want to be in a room full of girls? Definitely how we’d like to spend an evening. Adam said he’s going to be wearing a cravat and slapping on some aftershave.
Blair: Before my girlfriend reads this and thinks it’s a sneaky plan to turn Kraak into The Playboy Mansion, we realised that our Mums and Aunties could come without the fear of getting a half full plastic pint pot on the back of their head. My Nan’s going to be there!
Adam: We just live playing gigs that mean that the audience as well as the band are experiencing something for the first time together. Did that sound a bit pervy?
Max/ Jonny/ Blair: YES
2. why are you playing lots of shows in a small venue instead of playing the Ritz
Jonny: we’ve healined some pretty big gigs like The Ritz, the Academy. We love them and I’m sure we’ll play them again but our band works best kind of up close. We sold out Gorilla at Christmas and that was a great size – 650 people. Even at the back people were saying they got a sense of what was happening on the stage
Adam: We loved the idea of a kind of ‘residency’ feel – we hired the venue from the Tuesday with the gigs starting on the Wednesday. That means a whole night of soundchecking and even doing the place up
Max: it means we can try different things too – the Friday gig is being streamed live on the web. We’d have had two gigs to get used to everything. We’ve sold 900 tickets so it’s the same as The Academy 2 but everyone’ll be close to the action
Adam: support bands are important too. We saw Hot Vestry at Festival Number 6 and we all said we’d like to do a gig with them, so they’re playing our One For The Girls gig.
Blair: sometimes a big gig can be over in a flash – we wanted 5 days to enjoy it. Plus we’ve got Bonehead supporting us. We worked out a song and asked him to play. Hold on, was I allowed to say that
Max/ jonny: No!
3. How have you managed to return with so much fire
Jonny: People who’ve been watching the band for years have been saying that we sound better than ever. It definitely has something to do with this lot though. Blair is our very own Keith Moon – drummingwise, he doesn’t throw TVs out of windows or drive Rolls Royce’s into swimming pools
Max: that might only be because he doesn’t have a Rolls Royce though
Jonny: in terms of live stuff, there’s four of us now so you get 25% extra free. Max first saw us when he was about 12 so he knows what the crowd expect at gigs – Adam and me can ramp things up with two guitars. We’re not sure what it is but, yeah, we’re definitely firing on all cylinders
4. whats next for Twisted Wheel
Jonny:  we’re writing and we’ll be recording soon – festivals are round the corner too. Right now though, it’s about making these Kraak gigs the best thing we’ve ever done