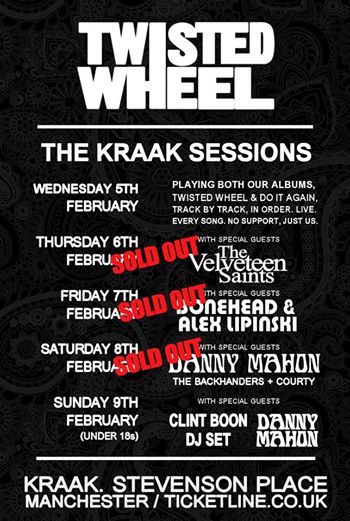 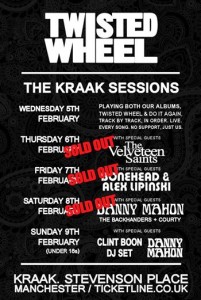 John Robb will be conducting an in conversation with lead singer Jonny Brown from Twisted Wheel on Saturday Feb 8th at Manchester’s Kraak Gallery as part of the bands’ near sellout series of gigs at the venue.

Twisted Wheel are playing a run of shows at Kraak and there are just a handful of tickets left so you better hurry up and get on the case or you could be locked out of these soon to be legendary shows.

Check for tickets now before the gigs sell out

Fresh from their triumphant sold out gig at Manchester Gorilla, Twisted Wheel have announced 4 shows at Manchester Kraak Gallery- the 300 capacity venue sold out 3 nights within minutes so the band have added a fourth in a run of gigs that looks like it will be talked about for years.

The band’s stunning comeback is taking on it’s own pace now and if they keep up their incendiary perfomances they could be serious contenders for the big breakthrough by the summer.

After a rabble rousing end of year gig at Gorilla, Twisted Wheel aren’t letting the grass grow under their feet. They’ve announced 2 gigs at Kraak, a
fantastic warehouse space in Stevenson Square, Manchester’s Northern Quarter. The first gig sold out in a couple of hours and features The Velveteen Saints who have played on the sans bill as Twisted Wheel a number of times – in between supporting the likes of The Charlatans, The View and Peter Hook. The Friday gig that has just been announced features an opening spot for ex-Oasis guitarist Paul ‘Bonehead’ Arthurs – ironic given that Oasis gave the Twisted Wheel lads one of their first breaks when they invited them to support them at their Heaton Park gigs – although Bonehead had left quite a few years before. Bonehead has teamed up with vocalist Alex Lipinski – they’ve been recording together for the last few months and this will be their first gig together. There’s only 150 tickets and they’re a bargain at £6