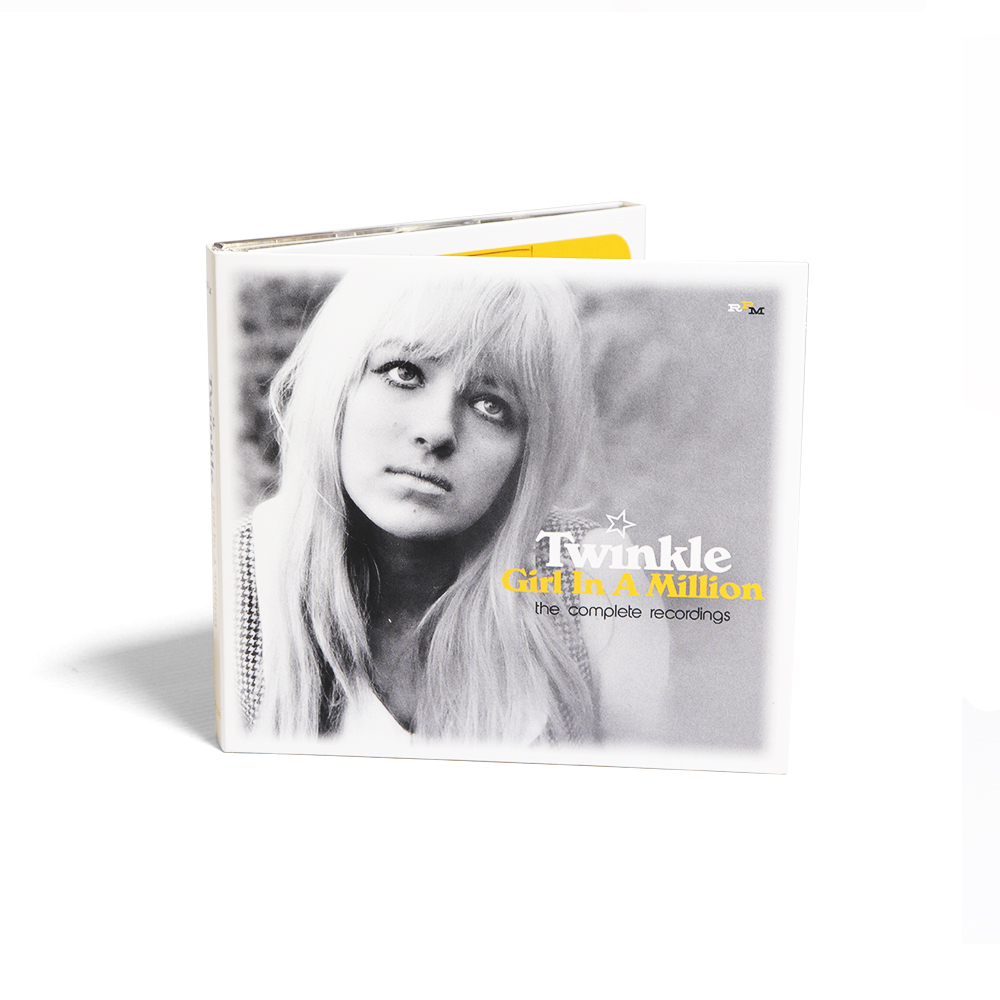 Twinkle – Girl In A Million 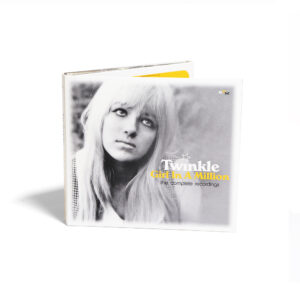 The complete recordings of the 1960s’ hitmaker, best known for the singles Terry and Golden Lights (later recorded by the Smiths)….Ian Canty encounters an unlikely ally to the Green Cross Man and a unheralded pioneer of Folk Pop…..

Twinkle (born Lynn Ripley) was only aged 16 when she stormed the charts in 1964 with her debut disc Terry. The record, in the tradition of Leader Of The Pack, was a cautionary tale about a doomed motorbikin’ hero. Quickly climbing the charts, it gained notoriety as a “death disc” and the BBC duly banned it. This of course only added to the appeal and for Twinkle’s sister and publicist Dawn James it was like hitting the jackpot. Contrary to the establishment mumblings that it encouraged speeding, Twinkle met many a biker down the years who claimed they owed their longevity to hearing Terry’s fate and taking it as a warning.

At the time though the single nestled in the Top 5 and Twinkle was the archetypal 60s overnight sensation. It must have been like winning the pools….but also it had the same inevitable comedown too. The negative side of fame was something that Twinkle, despite her tender years, was wise to and she even wrote about it in her follow up hit Golden Lights.

At the start it was a tale of instant success and for a moment Twinkle personified the swinging 60s, youth taking over from the old guard. Terry was a superior piece of Folk Pop and Golden Lights showed a definite song writing talent, a sharp look at how fame changes people. It wasn’t as big a hit as the debut, so the dramatic Soul-tinged Tommy and Poor Old Johnny mined the same bad boy blues as Terry, in an effort to replicate that disc’s success. Sandwiched between those singles was an EP with the lead track being an English Language version of Serge Gainsbourg’s Eurovision winner Poupée de cire, poupée de son, A Lonely Singing Doll. The cynicism of the lyrics fitted Twinkle down to the ground, but after all the early acclaim both the singles and EP made little impact.

Despite this, the first disc of this collection is mostly deliciously kitsch 60s Pop of the first order. The songs mentioned above are all well worth a listen, with also Take Me To The Dance and The End Of The World both getting the toes tapping and being charming in a daffy but loveable sort of way. The understated final Decca single What Am I Doing Here With You is excellent and deserved a better fate, but by 1966 at only 18 years old she was yesterday’s news. Life is pretty brutal at the top.

After leaving Decca, she hooked up with Mike D’Abo (Manfred Mann) for the full blown Soul sound of Micky, released on Instant Records and a real belter of a tune that should have done much better. Actually the four tracks Twinkle cut with him in the late 60s are among my favourites of the whole set. On Darby And Joan she resembles Annabella from Bow Wow Wow a little to these ears, but Soldier’s Dream is the monster for me, epic soaring Pop Sike. A longer version of Micky is pleasing too. This disc ends with a live version of Sha-La-La-La-Lee, the song made famous by the Small Faces. It doesn’t really suit Twinkle’s voice, but it is spirited enough.

Disc 2 takes us into the 70s with Take The Trouble/Michael Hannah 7″, cut for the President label. The a side is a breezy piece of Folk Rock and the flip a haunting and personal tale of lost love, the theme of which she would return later in the decade. Then followed Days (not the Kinks song, but similarly pastoral) with the stomping Glam-flecked Soul of Caroline on the reverse. This single was on Bradley’s Records, an imprint most well known to me from issuing the Goodies run of hits (this label also put out the Bill & Coo single).

The 10 tracks that made up the Michael Hannah album (not released at the time of recording) will be a real eye opener to anyone who had only heard Terry. By this time Twinkle’s lyrical skills had matured and this album documented her real life relationship with Hannah and its fraught aftermath. Breaking up with him had a deep effect on Twinkle that even necessitated a stay in a private mental hospital. A while after splitting up from Twinkle, Hannah was tragically killed in the horrendous Paris air crash of 1974. This song cycle was streets apart from anything she had put together in the past and the LP hangs together so well it is amazing that no one was interested in putting it out at the time.

There’s a touch of that all-pervasive Glam sound about Radio Station Lady, but the album as a whole is more in the mould of candid storytelling with relatively sparse Folk arrangements. I Am A Woman manages to be sad and assertive and musically very appealing, with Ladyfriend slipping slinky into a Jazz mode. Bowden House, which details Twinkle’s mental struggles to fast and strident synth Funk and then more austere sections, is the only piece that seems unfinished, with the producer asking if there is another verse at the end. The song Jane is simply heart-breaking, the imagined story of Michael’s mother who abandoned him at birth and the slow and emotion-filled Solider is a beautiful and curiously hopeful way to end the album.

After these moving and perceptive Michael Hannah songs, it is a real jolt to have next the appalling 1975 Smoochie/Always single that Twinkle recorded with her father as Bill & Coo. Something that should have been only restricted to Christmas family parties, an ill-judged pair of comedy songs that wastes her talent. I suppose for the sake of completism these tracks have to be here. Fortunately the later offerings on this disc are somewhat of an improvement. The Electropop version of I’m A Beliver is quite fun, no doubt owing a little to Kim Wilde’s early waxings and the four demos that end this collection are pretty good too. The final tune A Song For My Son shows that she could still handily pull off effective and moving Folk Pop.

Girl In A Million is a lovely and well put together set, with some really nice artwork and a history of Twinkle from the person best placed to tell the tale, her sister Dawn James. Twinkle was far from the puppet people might have tagged her, writing some of the best songs here and blossoming into an accomplished Pop/Folk performer. The Michael Hannah album tracks are worth the entry price alone, one can only speculate what would have happened if it had gained a release and gone onto be a hit. It certainly would have been merited, but it was not to be. By all accounts Twinkle lived a happy life away from music on the Isle Of Wight with her husband Graham Rogers (The Milk Tray Man!) until her death in 2016. The good news is her sister Dawn is working on a musical about Twinkle’s songs. Maybe, even at this late stage, she will get the attention due to her once again, like in those far of 1960s days.