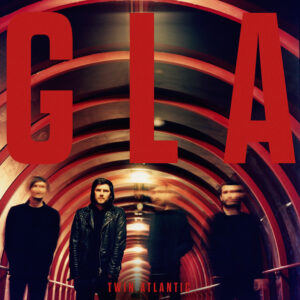 What do you do after releasing your most commercially successful album? Rip it all apart and crank up the fuzz, according to Twin Atlantic. Sam Lambeth gets to grips with the Scottish’s bands fourth record.

There’s a school of thought that a band’s most successful album commercially equates to being their most creatively enjoyable. That theory has been dispelled time and again, not least with Twin Atlantic – the clean crunch of 2014’s Great Divide may have gifted them sizeable success, dashing their reputation as a poor man’s Biffy Clyro, but while it was made for arenas, it also possessed the emptiness of one.

Thankfully, then, Sam McTrusty and the band have returned in a brisk fashion, largely abandoning the pristine summer sheen of Great Divide for an album that’s scuzzy, brutal and baying for blood. Opener ‘Gold Elephant Cherry Alligator’ is the perfect mood setter, a blistering, two-stroke guitar riff running in tandem with McTrusty’s Burroughs-esque narrative, where he squeals “pull my sunken eyes out” as the riff rumbles on.

Equally as impressive is the jet-black motifs of ‘No Sleep’, which swaps a sauntering, satisfying verse, where McTrusty laments “how do you measure if you’re over it or not?”, for a scorching chorus that wouldn’t sound out of place on an early Stone Temple Pilots album.

The tracks within GLA have a sharpness and a spark that had been smothered in Great Divide – take ‘Overthinking’, which is a close cousin of GD’s ‘Hold On’, but has much more tenacity and fight in its fidgety, barnstorming chorus. ‘Ex El’ and ‘Missing Link’ further hammer home the record’s wounding intent, while their by-now trademark acoustic number, ‘A Scar to Hide’, may fall short of ‘Crash Land’ standards, but is still an arresting breather.

Peeling away the bombast could have been a big risk for Twin Atlantic, but GLA’s attitude and verve spark an impressive return to form. And, rest assured, that accent is still as prevalent.