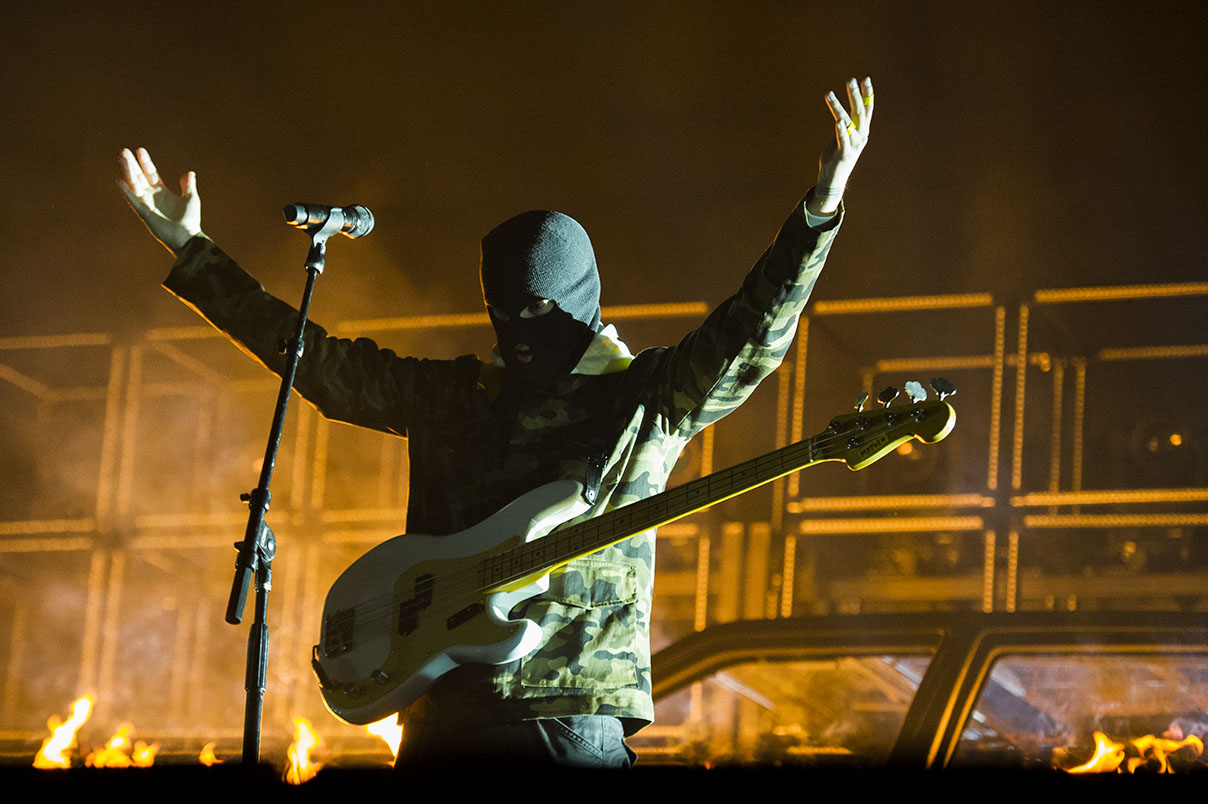 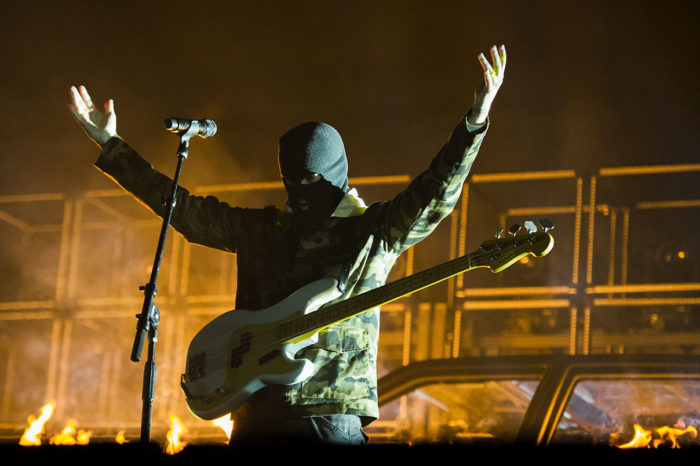 Twenty One Pilots, Bandito Tour, supporting their fifth studio album Trench is about four months in of its ten-month run and its finally Manchester’s turn to welcome Josh Dun and Tyler Joseph. Welcoming them, with the biggest smiles and the loudest cheers, Manchester does.

As the Arena lights dim further and the black curtain that conceals the stage falls away, the vocal adulation and appreciation explode. The slight illumination revealing Josh Dun’s face predominantly covered with a yellow bandanna, flame torch in hand. Exposed in the orange and yellow flames of the blaze that licks around Tyler Joseph’s body as he appears atop a blackened sedan shell. We are explosively thrown into Jumpsuit, Levitate follows, confetti continues to rain down on the audience. As the stage light increases faintly, Joseph, his face concealed in a ski mask, take the front stage mic and the audience swarms forward. 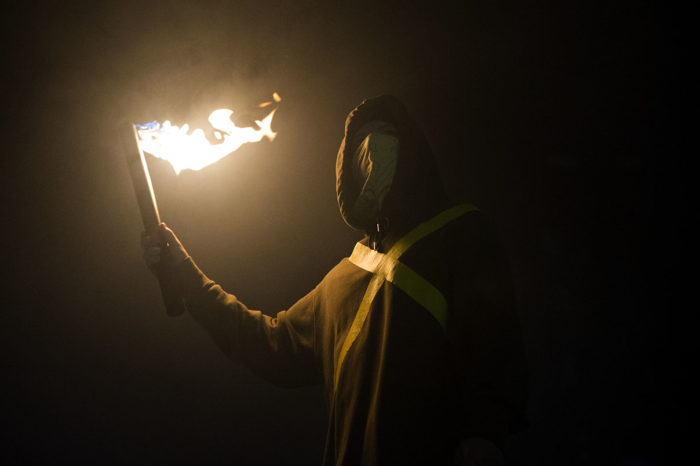 Fairly Local with juxtaposing lyrism and Dun’s deferred snare work is an entwining dark-hued gem. ‘I’m evil to the core What I shouldn’t do I will’ a ski-masked Joseph states his hidden expression adding volume to the menace. Flipping the sentiment to a progressive, What I shouldn’t do I will fight’ and landing at introspection ‘The world around us is burning but we’re so cold It’s the few, the proud, and the emotional’. Standing rigid centre stage, Joseph falls backwards the stage floor opens and he vanishes down as the lights go out. Less than a pause passes three stories up a spotlight snaps on highlighting a figure arms outstretched – Tyler is that you? Standing on a podium, as close to the Arenas roof you’ve ever seen a performer, the figure completes the final refrain ripping off the ski mask revealing it is really Joseph.

The huge stage screen comes to life Joseph’s red beanie, circa Blurryface, is seen travelling around various TOP video location before appearing form the lighting rig on a wire lowering gently to the mic centre stage Joseph meeting up with and wearing the hat. Stressed Out, Heathens, We Don’t Believe What’s on TV and The Judge fly by with stunning visuals, lights and audacious lifting platforms.

High above the standing crowd, the huge central lighting rig descends, creating a walkway just meters above their heads. Tyler performing Nico and the Niners back and forth along the bridge, ending the track on a second stage nearly at the opposite end of the Arena. Dun takes an equally enjoyable journey by running through the accommodating crowd that equally swarms in his direction as well as opening a pathway to allow him to go through. 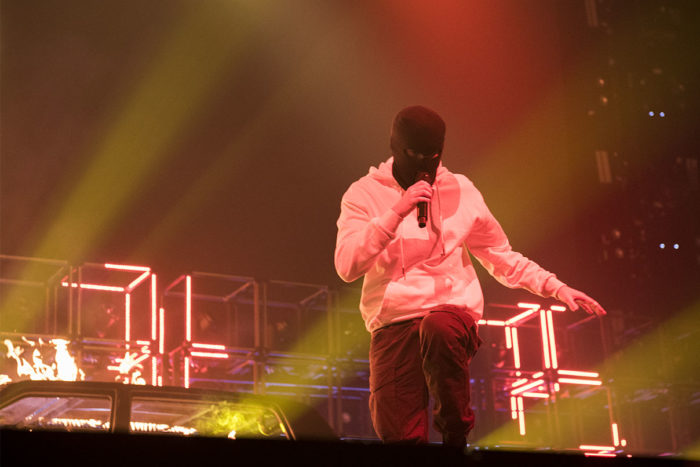 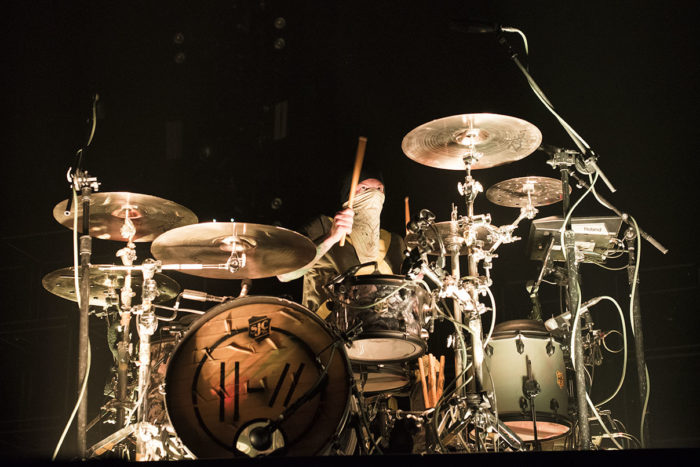 The second stage is roofed by yellow hued raindrop and icicle-like lights, Joseph in a yellow blazer moves from piano to dancing throughout a trio of songs from Trench. Neon Gravestones, Bandito and Pet Cheetah during which both Dun and Tyler make their way back across the stage bridge.

We receive Dun’s customary, and still exhilarating, piano backflip during Holding on to You and Joseph splitting the audience to vocally assist with My Blood, humorously incorporating venue security to assist in displaying how to dance like no one’s watching.

What haven’t we had tonight? Dun crowd surfing with his drum kit; check. Smoke cannons; check, Joseph crowd walking; check. A host of emotional sucker punches: check. The Quiet Game: check. Manchester scoring a mere 1.96 seconds despite the promise of additional songs if we passed 4 seconds.

As we enter the encore with the narrative heavy anthemic charmer Chlorine, the explored emotional shadows of Leave the City and the now established closer Trees. As the band along with the final wisps of smoke leave the stage, there is something of a vacuum inside, having been on an emotional high for the past two hours and twenty-one songs your heads swims still trying to take it all in. It really was that extraordinary. 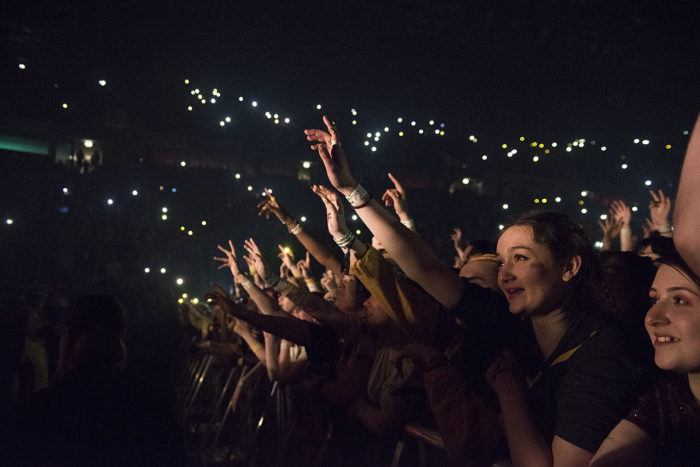 Twenty One Pilots are, not that we would forget, a duo and what they create out-mans what would seem even remotely possible. Tonight, they have extended their show to the multiple areas around the Arena to a sold out 21,000 capacity audience. Delivering a show that genuinely has been everything and more in terms of skill, performance and atmosphere. I love their aversion to artistic boundaries, their literary ability to shine a light on our mental darkness’s and their extravagant (but never tacky) theatrical tendencies; and going by the sea of tear stained cheeks, huge grins and thunderous show of thanks 19,999 others do too.

Words by Katie Clare. More news, articles and interviews by Katie on Louder Than War can be
found at her Authors Archive.  She tweets as @tokyo_katie and Instagram as tokyo_katie_captures her feed is devoted to captures from shows past and present.