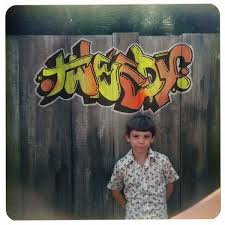 Following Wilco’s extensive touring to promote their last album The Whole Love, the band went on a hiatus which enabled its members to spend time on their solo projects. For their leader Jeff Tweedy this consisted of producing another album for American rhythm blues singer Mavis Staples on which he also played most of the instruments apart from the drums that were handled by his son Spencer Tweedy. If you’re a Wilco fan you’ll remember Spencer from his appearance in the I Am Trying To Break Your Heart documentary in the tour bus scene where his dad is trying to guess the song of the drum pattern his son is playing on his thighs.

Following the recording of the Mavis Staples’ One True Vine, father and son wanted to continue their collaboration and began recording songs for a Jeff Tweedy solo album that morphed on a collaboration simply labelled Tweedy.

The resulting album, Sukierae, was recorded in Wilco’s loft in Chicago and during a difficult time for the Tweedy family as it followed the death of Jeff’s older brother Greg and the recording of the tracks was done while Sue Miller (Jeff’s wife) was being treated for a life threatening illness. It opens with a punkish track that would have not sounded out of place in a live set of The Primitives (Jeff Tweedy and Jay Farrar’s first band).

The record has a definitely looser feel than a Wilco album and you can sense that Spencer’s youth and the freshness he brought to the recording process allowed his father to take more chances with the arrangements and more especially with the song structures. A good example of that is the third track on the record World Away with its awkward interlocking bass guitar and drum patterns. Like a few of the songs on the LP they sound like they were developed with father and sons jamming in the studio laying down the rhythm structure first and then working out melodies and lyrics.

However, the record isn’t just the Tweedys trying to sound like a 70s krautrock outfit (and I don’t mean that in a dismissive way) several of the songs display Tweedy’s almost supernatural gift for writing poignant ballads with just a couple of chords (Wait For Love, Nobody Dies Anymore) or his ability to craft catchy ditties (Summer Noon).  Sukierae is a bit difficult to take in one go as most of the tracks on the second disc are rather mellow but songs like Down From Above or High As Hello are as good anything you would find on a Wilco album.