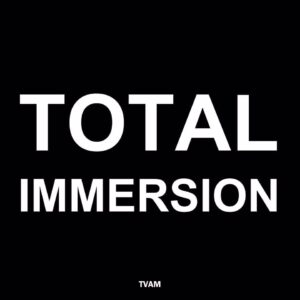 TVAM has shared brand new track ‘Total Immersion’ to be released on 25th November via his own new founded Psychic Data label.

Following previous singles ‘Porsche Majeure’ and ‘Gas & Air’, the latter of which was Lauren Laverne’s ‘Track of the Week’ on 6Music, TVAM’s latest offering is a kraut rock inspired exploration into the sacrament of Baptism. TVAM is Joe Oxley, who takes in a lifetime of repeats, reruns and reboots to craft his own low-budget, high-risk concept. A World in which broadcast becomes performance.

Holy fuck! Ok, here we go… Twinkly electronica starts this track that slowly reveals an insistent minimalist one chord driving guitar sound very reminiscent of Spaceman 3 or Spiritualised. Calling the track ‘Total Immersion’ is very prescient as this is exactly what happens to one as the track progresses. The noises rise and fall and there is an overwhelming driving pulse to this track that reminds one of a particularly good roller coaster. It’s unabashedly repetitive and relies on its throbbing beat to take you on its cacophony journey. I like that.

As more and more layers of guitars are added, and even a hint of a solo toward the last three quarters of the track, the runaway freight train that is ‘Total Immersion’ comes to a grinding halt and you really end up wondering what sort of trip you have been on! Either way, the journey was pretty nice!

You can find TVAM on his Facebook, Soundcloud and he tweets as @_tvam.