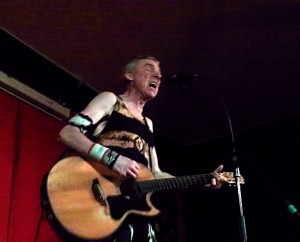 “The only TV worth watching tonight – TV Smith”. Alan Grundy spends some time with The Adverts legend, working as hard as ever, tireless and as committed to the cause as ever.

This was a gig I’d been looking forward to for some time, any gig by TV is of course a treat to be at but this was my first of 2014 (in fact, due to work, it was only my second outing of the new year – the first having been Wilko Johnson some 2 weeks previously) and it had been 4 months since my last fix. It was also TV’s first UK appearance of 2014. After a lengthy European tour mainly as support to the UK Subs and playing larger venues than the norm, Tim was back to his “bread & butter” employment.

We found the venue with great ease for once (hey things are looking up!) and parked just around the corner. The Glebe is a classically designed (late industrial revolution chic) corner pub in the heart of old Stoke and to be honest is probably worth a visit in itself if you’re in the area. We had arrived a little early (the usual Friday tea time traffic delays on the M6 hadn’t been too bad for a change) and settled in at a table near to the stage. We were soon approached by one of the event organisers who seemed most apologetic that he had to take money off us for the evening!

It definitely seems to be a reflection of TV’s persona that he has gathered through the years a collection of local promoters who are actually really nice people and a pleasure to meet – Stoke was no exception. Often, impressed with the distance that I’ve travelled in the cause I’ve been offered free entry, free drinks & even free accommodation (still waiting for the pick of the town’s virgins though!).

We were soon greeted by everyone’s favourite punk troubadour who promptly commandeered our table for his mercy!

Support for the night was the (local?) band “Retrovibe” who provided a fine start to the evening. Anyone who starts and closes their set with a Clash tune is OK in my book and between the two was an eclectic mix of songs (avoiding the usual clichéd covers) from pre-punk (Bowie & Roxy) through to post-punk (Joy Division).

TV powered into his recent ubiquitous set opener “Only One Flavour” and I realised just what I’d been missing these last four months. There was going to be many flavours tonight however and the second song was a newie “The First One To Sign Up” from the forthcoming album. It was only the second time I’d heard this one (TV has been previewing tunes for his impending new album for some time now) and it has certainly grown on me – can’t wait to hear it with a full band accompaniment.

For the “old-timers” in the lively and enthusiastic crowd a couple of Adverts anthems quickly followed and with the recent shackles of a short support set now and truly off a cracking selection of songs followed including another unreleased ditty “I Delete” and Teev’s version of the tune he wrote for Die Toten Hosen “Pushed Again”, as well as the usual suspects. We’d well and truly passed the midnight hour now but TV still managed to squeeze in “My Punk Rock Poem” before rounding off proceedings with a trio of Adverts singles cuts though, sadly, there was no time for an encore.

We now adjourned to the merch table and as usual TV had time for anyone who wanted a chat, photo or actually wanted to buy something! Best sellers on the night being TV Smith beanie hats & t-shirts. Light relief was provided by the tipsy punter who was convinced that his mate wanted his shirt signed “One Chord W*nkers”!

All in all, another great night at another great venue (I’d missed TV’s two previous appearances at The Glebe, hopefully I’ll be there next time).

TV’s new album should be released soon and I for one can’t wait to hear the new songs that he’s showcased at gigs over the last year or so put into a band perspective (I do love the solo versions, however – how about some live bonus tracks on the album Tim?) so keep checking out his website for news of this, upcoming gigs, merchandise etc. Find him also on Facebook.

See ya at a TV gig soon!

All words by Alan Grundy, find his Louder Than War reviews here.