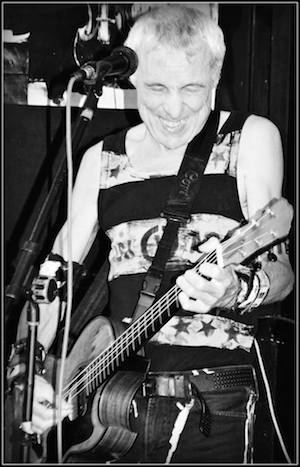 We hadn’t even entered the venue yet and already I had a woman in my arms. She was so forward and overly friendly I was certain she must be drunk, but her balance was solid and her eyes clear without the usual glaze of a drunk. We spoke for a few minutes and she asked where we had come from. As soon as she realised the distance we had travelled she offered up her home for the evening.

“Nah, pet. You waan be gwan ome toneet. You can come back mine like. Arl make ye fewd and we can drink tea.”

The geordie accent is one that is hard to follow but even more difficult not to fall in love with. Our new friend showed us around the venue, which had an incredible roof garden for its patrons, before escorting us into the bar area. I asked the bar lady if they served tea and waited with anxiety at her response. I had recently asked the same question while at a metal pub in Manchester and got the blunt reply of, “No. We serve Beer.”

Thankfully the joviality of Gateshead was an affliction spread all over and not just reserved for Ms. Happy Sunday.

“Nah, pet. But Arl gwan doon int cellar and get the kettle if ya like?”

Within minutes a cup filled with dark tea was placed in front of me and the lady didn’t even charge.

We sat with TV Smith and joked about how no matter how far he travels he can’t seem to get us the fuck out of his hair. I asked if he’d had any luck finding a label for his upcoming record and it looked as if, for better or worse, it would be released entirely off his own back.

We all headed into the venue area after our drinks to find the show already under way. We were treated to a cover of The Clash from the crooning vocals of opener Just Braggin who, whilst donned in a Johnny Cash shirt, played a mix of original and covers all of which had a distinct anti-Tory sentiment.

The second act were Minnie, playing as a duo instead of their usual full band guise. Having never heard their usual sound it was impossible to compare this stripped down version to their full entourage but I imagined their sound was a late eighties/early nineties grunge inspired outing akin to the sounds of bands such as Soundgarden and Pearl Jam. This was delivered with a punk rock ethos and lyrical content that dealt with the hardships of their home town (with the song ‘Tower Block’ being a perfect example of this) and translated quite well when stripped down losing very little of the energy expected from a full band. Even though vocalist Minnie complained that her throat had been torn to shreds from a hen weekend her vocal prowess was still very impressive and it seemed as if the entire audience felt the same as the cheered enthusiastically after ever track.

The first thirty seconds of Pipe Riot had me in fear that I would have to endure twenty odd minutes of mediocre poetry. This introduction was merely a ruse and part way through their opener the atmosphere transformed into a helter-skelter of smutty innuendo backed by a priest playing bagpipes…..seriously. The next slightly under half an hour had the entire room on the verge on unconscious bladder release as wordsmith Skotty played with metaphor and double entendre. The words once again had a strong anti-Tory feel running throughout and, even though being against the Tories is a very normal and sensible thing, the malice attached to every toff-bashing joke gave the impression that perhaps this quaint little town of incredibly friendly people had been hit by the cuts more than most across the UK.

Of course, the main attraction did not forsake the crowd of blood hungry punks opening with new song ‘Replay’. Masked as an in your face punk rock song the lyrical content holds the hidden anguish of a man who struggles to maintain a living from his art and, no matter how hard he works, cannot seem to catch a break. As the audience members began to gravitate towards the front of stage I noticed just how varied an age range was present. There were just as many mid-twenty year olds as there were middle agers and even an out of place old couple, the wife of which sung every damn word to every damn song. The real treat of the evening came during as mass shouting match where the crowd blurted out the most unplayed from TV’s back catalogue, while the man attempted to remember songs he hadn’t played for years, one of which was a song called ‘Roll Like A River’. This rarity had been a demo track placed on a collection and seemingly forgotten but hearing it live I felt myself choking up at such a heartfelt anthem that is arguably the finest I’ve ever heard from punk rocks most unappreciated hero.

After the show we sat with TV and he seemed to be buzzing with positivity from the energy of the show. The audience were 100% behind both the music and its morals and this had clearly affected the man greatly. After a while he snook out for a special cigarette and we decided to take our leave, hurtling down the motorway back towards Manchester.

All words by Ian Critchley. You can read more by Ian by visiting his Author’s Archive.

Kentucky Fried Chicken have now got a vegan menu – a vegan win or lose?

In Defence Of Alien Ant Farm

June 17, 2014
We use cookies to ensure that we give you the best experience on our website. If you continue to use this site we will assume that you are happy with it.Ok