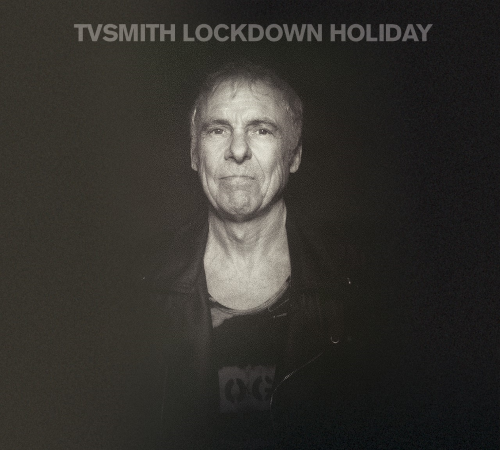 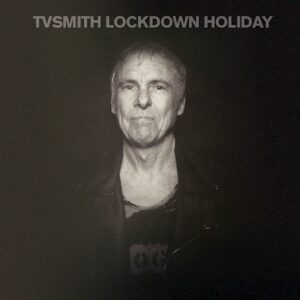 CD only UK
(Vinyl available in Europe on JKP)

Stripped down to acoustic guitar and voice, TV Smith, 11 songs about the pandemic and surviving infection. A straight-forward but remarkable account, and a measure of what a great artist he is.

Tim Smith is our friend. (Track 2 of the 1979 ‘Cast of Thousands’ album by the Adverts)

And we don’t want our friends getting this goddamned virus. Thank whatever deity you believe in, that he’s a wiry, fit, old so-so, presumably down to his bike regime and vegan diet, and he has got through contracting Covid-19 seemingly unscathed.

This album was completely unplanned. As usual, TV Smith had a full years gigs planned, but as he sings in track one, one sneeze in a service station, and that’s where my calendar ends… He and his partner caught the virus, right back in March.

From my sickbed I watched with utter disbelief as the mismanagement of the situation got worse and worse, and when I started to feel well enough again I did what any writer would have done: I began to write about what was happening.

What is most striking is that the songs are free of self-pity, upbeat for the most part and tell the story almost conversationally in a series of songs, which continue where the previous one leaves off.

Immediately after he sings We’re already infected.. the next line is Sometimes it’s hard to believe it, but we are the Lucky Ones .. and then he’s singing about refugees in worse circumstances, of whom the Great British public have metaphorically washed our hands of, too concerned with our holiday plans being messed up.

It’s hard to see the funny side when you are feeling unwell / no taste and no smell..  Send In The Clown is suitably scathing and sarcastic about He Who Shall Not be Named.

In a way many of the songs (Join the Mainstream,  Good Old Days)  are the same subjects as in any of Smiths other albums: the selfishness and greed of mainstream society, capitalism, the Great British still making the same old mistakes… only the pandemic brings it all into a sharper focus.

The title track is possibly the least effective in that for many ‘lockdown’ doesn’t feel like a holiday and the denouement –who’s gonna pay? YOU! – doesn’t come til right at the end.

Artificial Flowers is a personal favourite -with it’s great lyric: we sleep behind the wheel in driverless cars / we show our love is real with artificial flowers. And the contented and thoughtless are like superheroes with superficial powers.

I Surf the Second Wave, for me, is TV Smith’s absolute best song for decades. The narrator is the Virus itself setting out its plans – yet it’s sung like the most unlikely love-song ever, in a way which recalls Richard Butler from Psychedelic Furs.

Half of the songs I would say personally would benefit from being recorded again with a full electric band – whilst I also kind of wish Tim would relax into a slower acoustic mode, like on Second Wave, and not feel the need to be the full on punk-rock ‘strummer’ all of the time.

That said, I am just glad he is still around when Covid has taken so many people from us.

The albums strength is that it is a great set of songs, listened to as a whole – it reflects the shared experience of 2020, the pandemic, lockdowns and the conflicting emotions (totally pissed off yet counting your blessings) – but as individual songs they all stand among TV Smiths finest -and yeah, including the Adverts classics. 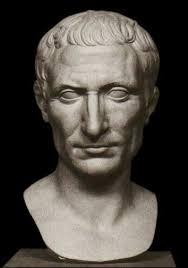 Tim Smith is our friend and he is also our hero. He hates it when we put him on a pedestal, cos he’s a modest bloke, but then again… when you look at the album cover…. doesn’t it look a little bit like this (picture, to the right)…

Hail Smithy – our very own Punk Caesar!  I told him to beware the Ides of March!

But I have always said  he is “The noblest man that ever lived in the tide of times.”

December 4, 2020 0
GLASVEGAS return with their triumphant fourth album ‘Godspeed’, which will be released in April 2021 on the bands own label Go Wow Records. They will be touring the UK in April and May 2021.
Read more