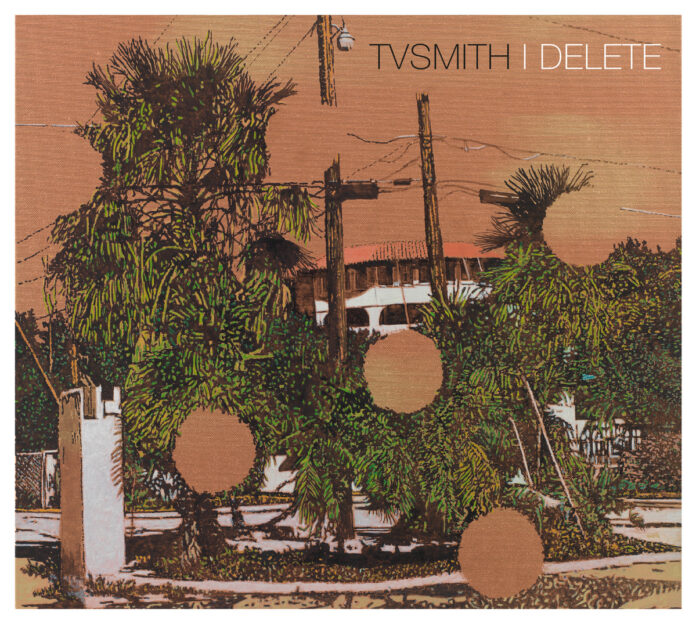 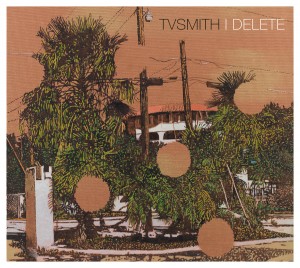 Sixteenth studio album from TV Smith reviewed by Ged Babey, struggling to be objective, without being objectionable.

– The Adverts, from Cast of Thousands.

I don’t flatter myself though. TV Smith plays gigs all over Europe put on by fans who have become friends. At his smaller shows he shakes hands and talks with anyone and everyone there if at all possible. He is our friend.

TV Smith works independently from the Music Business at a grass roots level. No manager, no roadie, no record company, he travels light, always gives 100%, is a down-to-earth lovely bloke but still a “legend” and “a hero” and not a sell-out. He’s still as passionate and angry as when he was a young man, and still an articulate songwriter.

It’s always good to see him play because there will always be some new songs, some old songs, requests and surprises. He is never complacent, never coasts, or rests on his laurels, or trades on old glories. I’ve never seen him play a lacklustre gig.

The albums are a different kettle of fish. On first listen they tend to sound a bit too mellow and melodious at times. The keyboards and gentle picking guitar parts  “Sound like fuckin’ Dire Straits” I once said to the great man (about In the Arms of My Enemy). His reply was along the lines of I was the one living in the past not him. He did say that the albums were purposely different to the stripped-down live solo sets and he used friends, who happened to be top-notch session musicians, like the late Tim Cross, to help with them, so they played what came naturally to them.

The fact that Tim put together the Bored Teenagers to perform full-on Adverts material and has released live sets and acoustic recordings means that fans can pick and choose from his recorded output to find what suits them and their personal tastes. TV Smith tries, and mostly succeeds, in pleasing everyone who follows his musical journey.

So, I Delete will not be for everyone, but it is, in my opinion, the best of his full-band, studio work since 2006s Misinformation Overload. The songs are key. There are always a few absolute 24-carat classics in any TVS album and the title track, Hometown and Festival of Fools, are the three which stand out on this release. That said, there is hardly a weak track or misfire. London Hum I personally don’t like much, simply because there are just too many songs about London, and the song about ‘The Cuts’ really didn’t need to start with the sound of a pair of scissors.

I Delete, the song, starts off sounding like the Jags and they’re powerpop-lite (without the Costello-isms) but then becomes a bit Nirvana-ish! First One To Sign Up has an annoying chunky rhythm ‘n’ beat that reminds me of Eye of The Tiger by Survivor. And It Don’t Work seems to be an ode to a faulty new mobile phone. (Not really; it’s about progress and capitalism and shit.) Home town is a really cool song which completely by accident I’m sure, rips off the Smiths There Is A Light Which Never Goes Out. Festival of Fools is quite possibly about the attendees at Rebellion in Blackpool (snigger).

With the debate over Russell Brand raging I was amused to read a comment on Facebook which said apropos Brands views “Everything he’s saying is what punks have been saying for decades…” which basically is, in a nutshell kinda way, true. Tim Smith has been misrepresented as a Wolfie Smith-style Protest Singer in the past but he sings from the heart and never writes throwaway lyrics. There has to be a point to the songs. Even Complaints Department from Coming Into Land was satire and caricature rather than just plain comedy. Smith has written about capitalism, oppression, inequality and so on, in an observational way all his life.

With the state of the nation, nay the world, at the moment I couldn’t help thinking on the first few listens to I Delete that it somehow didn’t address things as they are with quite enough strength, with as much rage and bile as befits the tyranny of the times. It wasn’t as angry and as scathing as it could be. But thinking about it, that’s not Tim Smith’s style. He was always more Think About It than Smash It Up. His songs are imbued with a humanity and quiet positivity. There is a glimmer of hope and belief in the human spirit and that, despite society being shit and the odds stacked against us, we will survive if we stand together … sort of.

The bonus tracks on I Delete were written for a German play and are the icing on the cake. Dangerous Playground, The Drink and The Rock and Roll benefit from a great production job, violins, piano and accordion touches  and are probably the most intense, emotional songs he’s recorded for a long time, and they are up there with the very best of his work.

I’m proud to know TV Smith and to count him as a friend, in slightly-more than a Facebooky kinda way. Long may he continue making the music he wants, in the way he wants, not to mention the guest-appearances on others albums (Paranoid Visions and the Mutants spring to mind this year) and I’m confident his loyal fanbase will continue to support him. This album though, deserves a wider audience. Someone (from the States) once called him the UK’s equivalent to Springsteen (meant as high praise!) but to be honest, he’s much better than that and in a class of his own.

The album can be bought via the website or Bandcamp.