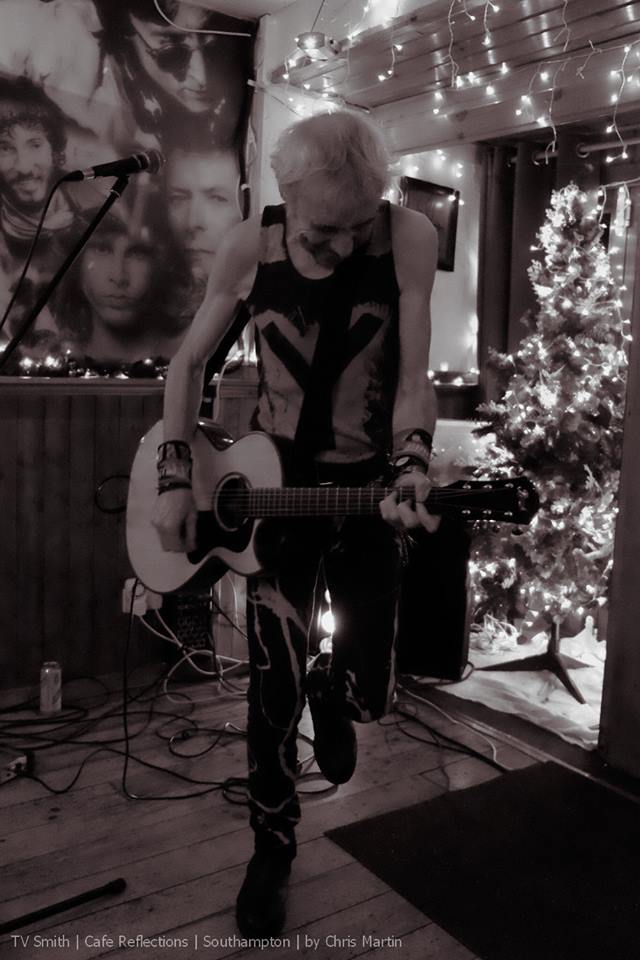 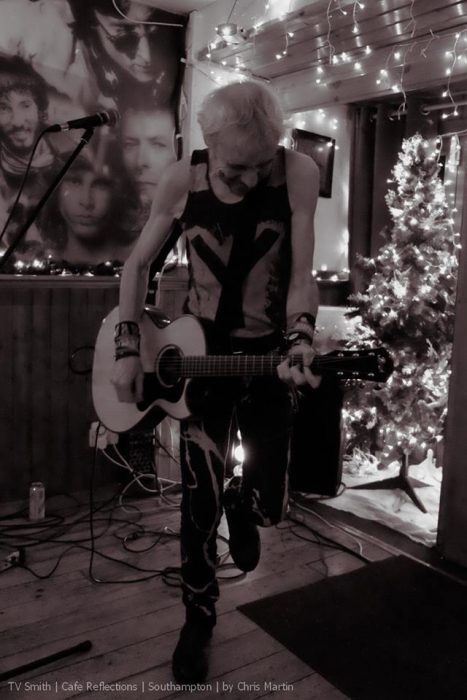 Gigs in cafe type venues are the next-big-thing it seems… well, Gus Ironside went to one at the other end of the UK the other day, and now Ged Babey attends  his second Caff gig in 8 days  and there are a couple coming up in Southsea … so it may not be exactly ‘sweeping the nation’, but you never know…

TV Smith never lets you down.  He always gives 100% when he plays. In a way, I wish he would slow down a bit for the odd song.  Pull up a stool and sing a song of adversity and triumph without feeling he has to be angry and railing against injustice and literally stamping his feet on the floorboards…  but he always plays a perfectly judged set of old songs, recent songs and brand new numbers and has a knack of tying them together into an over-arching narrative with a few words between each.

‘I Delete’ gets close to being a more restrained Smith song.  There are gentler sections to songs like ‘the Lion and the Lamb’ where there is some finger-picking rather than frantic strumming but, the overall impression is one of These Are The Things that Piss Me Off,   and So Much Injustice. So Little Time.  So his frantic playing suits the content.

Even his song intended to be a rallying cry of positivity ‘the Good Times Are Back’ -ends up being an angry, sarcastic anthem….   don’t get me wrong,  I love TV Smith – he is one of England’s most under-valued, under-appreciated (protest) songwriters.  He is our Springsteen…  The Boss and a host of other big names look down from the mural on the walls of the Cafe and put Tim off his stride a bit. ‘I’ve got a lot to live up to..”  No, you haven’t mate.

Dan O Farrell and his Difference Engine played before TV and the pedal-steel and cello arrangements reminded me of the ‘Arms Of Your Enemy’ album by TVS – which I mocked for being too Dire Straits at the time (I was wrong – it’s an enduring classic) .  Dan and Co have played literally 100 gigs in 2017 and recorded an album which stands as a testament to their abilities and his songcraft. 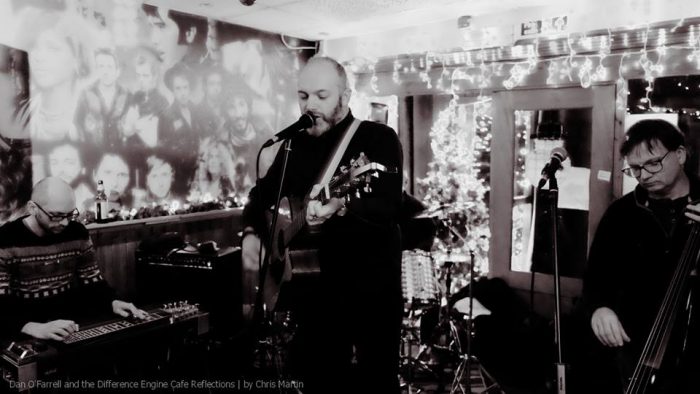 New songs pour out of O’Farrell on a weekly basis and they get more polished the more he plays them. His musicians and friends seem to intuitively grasp the mood and pace of his lyrics – which fall between thoughtful, despairing and a teeth-gritted anger and philosophical resignation that our fellow man can be a bit of a twat at times.  ‘Death by 100 Cuts and ‘Scars’ were relatively new whilst ‘Rosaline Wins’ (a Shakespearean tragedy that Guy Garvey would be proud of) is  an oldie almost – as is the manifesto to originality ‘Why I Don’t Do Covers’.  ‘Couples’ – a song about Love and History, listing everyone from Adam & Eve, Adolph & Eva to Yoko & John and Bianca & Ricky should be a staple on BBC Radio by now were there any justice…   Dan O”Farrell and his loyal engineers do light and shade, wry humour and tears and do it faultlessly.

TV Smith was so impressed by Dan’s ‘Anti-Christmas Day’ song he hesitated to play his own seasonal offering ‘Xmas Bloody Xmas ‘ in case it didn’t match up.  He did play at least four brand new, as yet unrecorded songs: ‘No Hope Street’,  ‘Keys To The World’,  ‘We Stand Alone’ and ‘No Control’ – so one can assume there is a new album on the horizon, because with TV Smith there is ALWAYS a new album on the horizon.

Tim Smith likes to keep his private life just that: private, but with social media being what it is, the news of the end of his relationship with Gaye Black (Gaye Advert to you)   a few years back, after almost forty years was a shock in ‘punk circles’.  He now has a new partner and seems happier and more relaxed offstage than the last time I saw him.  She is charming. (I caught a glimpse of her in the audience mid-set mouthing the words to one of the new songs).   Sally has known Tim since schooldays and in old-fashioned romantic tradition “Waited for him for 40 years.” His face was a picture when he realised that she said this in front of a bloody journalist.  ” There is a great love song just waiting to be written there Tim…” I said to him grinning.

“Those are the ones Ged, that I keep to myself” he replied.

TV Smiths work is more story-based and about ‘protest and survival’ …but then I thought of Penny Rimbaud’s famous quote about all of his (Crass) songs being (despite initial appearances) ‘love songs’: written because he loves the human race/people,  and the songs express how he feels about all the pain and injustice they suffer.  Well, exactly the same applies to TV Smith.

He wrote love songs to or for (or about) us when we were ‘Bored Teenagers’, when we were 21, when we lived through the Cold War and nuclear threat, when we lived through the greed of the 80’s… right up to now, when we suffer in the ‘Arms of Our Enemy’ , living in our ‘Clone Towns’.  He writes and sings, channeling his anger, expressing our frustrations, in the best way he can, and out of love…    We in turn, (speaking for all of his fans)  love and respect him for it.

The whippet-like man from the West, in the bleach-tie-dyed trousers and vest… met Southampton’s most erudite songwriter at a Café in Shirley – and it made for a great night of pre-Xmas cheer, beer and song. With love.

With apologies to first support act Who Killed Nancy Johnson who I missed. (GB)