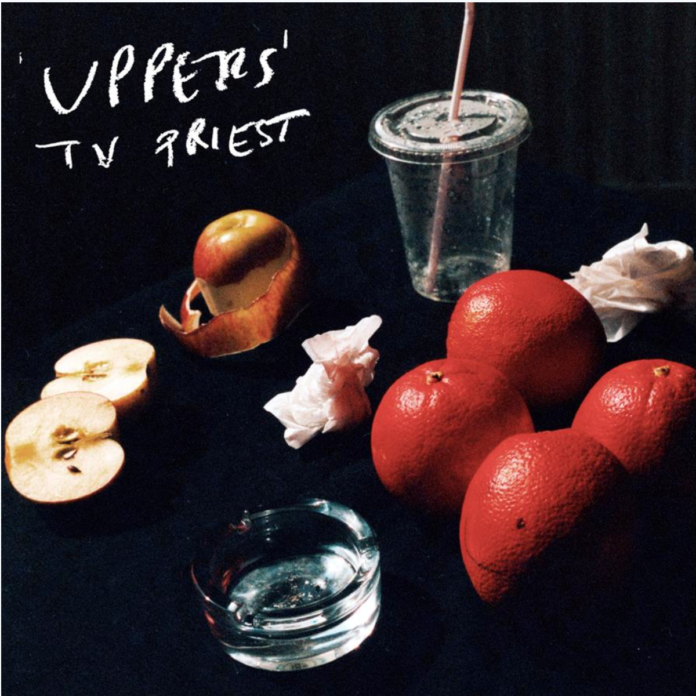 Out November 13th on Hand In Hive

Very much a benchmark for DIY principles, TV Priest have self-recorded the album and all imagery and design work is done by the band’s own frontman, Charlie Drinkwater, who is a full time artist. He did the latest Fontaines D.C. album cover and it’s his handwriting on those “Life Aint Always Empty” shirts.

Smart, ambitious and satirical lyrically, the new single has more melodic smarts than most of their peers and it says an enormous amount for the confidence of the band in their material that those first two singles – “House Of York” and “Runner Up” – haven’t even made the track listing of the album.

London’s TV Priest arrived seemingly fully formed at the start of the year with their widescreen debut single, “House Of York”, immediately picking up international press attention and seeing support from BBC 6 Music, including multiple plays from Steve Lamacq.

It was no fluke.

Their second single, “Runner Up”, followed soon after and saw the band go straight onto the 6 Music playlist. If ever there was a new band with confidence in their material it’s this one: today they announce their debut album “Uppers” (out November 13th on Hand In Hive) alongside a track listing confident enough to leave both out. The album will be available physically on both CD and LP, including a run of 300 strictly limited coloured vinyl through Recordstore.

Like both early singles so far, the album is self-produced by the band’s own Nic Smith and is tantamount to the dual power of both a DIY ethic and immediate, incendiary songs. Their third single, “This Island”, debuted today as Jack Saunders’ “Next Wave” on Radio 1 and the first to be taken from the album, is another maelstrom of satire and melodic intensity, all wrapped around a fiery polemic on the state of Britain in 2020, hurt but hopeful.

Front man Charlie Drinkwater says the following about the song:

“‘ This Island’ is about incoherence and inarticulate responses, both personal and political, in a time and place you don’t fully understand anymore. It’s an unrequited love letter, and a howl of frustration; a mea culpa and a call to arms. We wrote this to an increasingly nationalistic and isolationist drum beat playing out at home and abroad, and frankly we are scared and appalled.

As artists we aren’t offering up solutions for living, but maybe we can extend a hand and let someone know that you aren’t alone in feeling under prepared in your responses yet powerful in your convictions.

That small boats can still make big waves. That we have a world to win.”

TV Priest will also be playing their first headline dates in October of this year.
Catch the band live on the following dates: 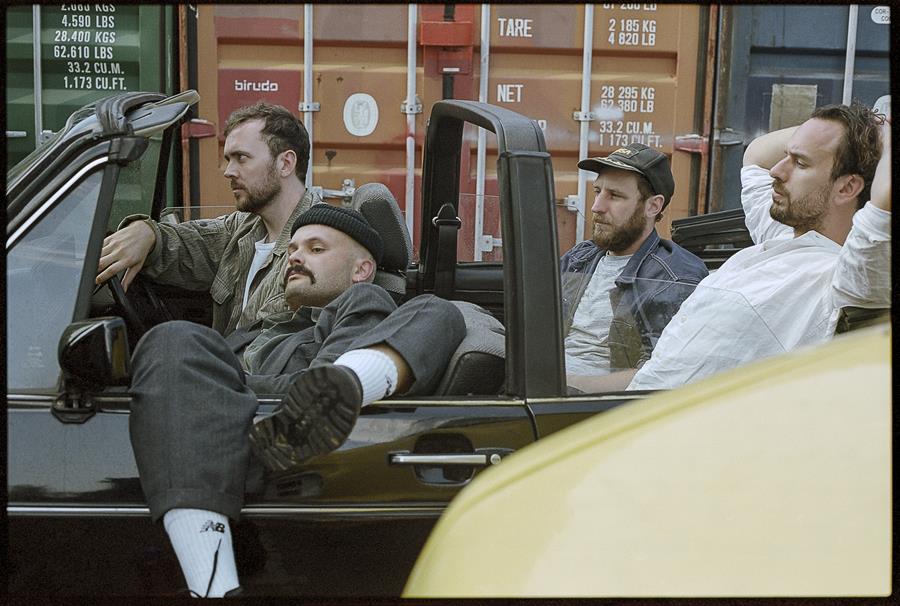 It’s tempting to think that you have all the answers, screaming your gospel every day with certainty and anger. Life isn’t quite like that though, and the debut album from London four-piece TV Priest instead embraces the beautiful and terrifying unknowns that exist personally, politically, and culturally.

Posing as many questions as it answers, ‘Uppers’, which comes out via Hand In Hive (Blackaby, A.O. Gerber, Wyldest, Swimming Tapes), is a thunderous opening statement that continues the UK’s recent resurgence of grubby, furious post-punk music. It says something very different though – something completely its own.

Four childhood friends who made music together as teenagers before drifting apart and then, somewhat inevitably, back together late in 2019, TV Priest was borne out of a need to create together once again, and brings with it a wealth of experience and exhaustion picked up in the band’s years of pursuing ‘real life’ and ‘real jobs’, something those teenagers never had. “The process of making music had always been very cathartic for us,” they say, “and we probably didn’t realise that until we stopped doing it for a while and realised what was missing.”

Last November, the band – vocalist Charlie Drinkwater, guitarist Alex Sprogis, bass and keys player Nic Smith and drummer Ed Kelland – played their first show, to a smattering of friends in what they describe as an “industrial freezer” in the warehouse district of Hackney Wick. “It was like the pub in ‘Peep Show’ with a washing machine just in the middle…” Charlie laughs, remembering how they dodged ‘Star Wars’ memorabilia and deep fat fryers while making their first statement as a band.

The gig might’ve seemed innocuous – not to mention humorous – at the time, but it remains their only live gig to date, and may well end up going down in legend. Having pencilled in gigs for the rest of 2020 and readied debut single ‘House Of York’, a searing examination of the Monarchy set over wiry post-punk and fronted by a Mark E. Smith-like mouthpiece in Charlie, the coronavirus pandemic hit.

Unsurprisingly, there isn’t a precedent for launching a band during a global pandemic, but among the general sense of anxiety and unease pervading everything at the moment, TV Priest’s entrance in April with the release of ‘House Of York’ served as a breath of fresh air among the chaos, its anger and confusion making some kind of twisted sense to the nation’s fried brains.

It’s the same continued global sense of anxiety that will greet the release of ‘Uppers’, and it’s an album that has a lot to say right now. Taking musical cues from both post-punk stalwarts and the mechanical, pulsating grooves of krautrock, it’s a record that moves with an untamed energy. Over the top of this rumbling musical machine is vocalist Charlie, a cuttingly funny, angry, confused, real frontman. “I found singularity at the bottom of the Mail Online comments section / HAHAHA, laugh it up,” he deadpans on new single ‘This Island’, and the tales he weaves across the new album feel plucked straight from the country’s collective consciousness right now.

A song Charlie wrote in response to “a parochialism that feels rampant in the UK,” ‘This Island’ addresses creeping nationalism in the country. “It’s a howl of frustration, and is a bit incoherent,” the frontman says. It’s a word that could easily seem like he’s putting himself down, but the incoherence here, and across the entirety of ‘Uppers’, is one borne of trying desperately to seek enlightenment, while also basking in the unknowability of things. As incoherent as a good old fashioned debate down the pub, it’s a brave and honest admission of not having all the answers, something that will undoubtedly connect widely in 2020.

According to Nic, ‘Uppers’ sees TV Priest “explicitly and outwardly” trying to avoid narrowmindedness and avoiding conflicting points of view. “There will never be a solution if it’s just heads banging together,” he adds. ‘Uppers’ sees TV Priest taking musical and personal risks, reaching outside of themselves and trying to make sense of this increasingly messy world. It’s a band and a record that couldn’t arrive at a more perfect time.