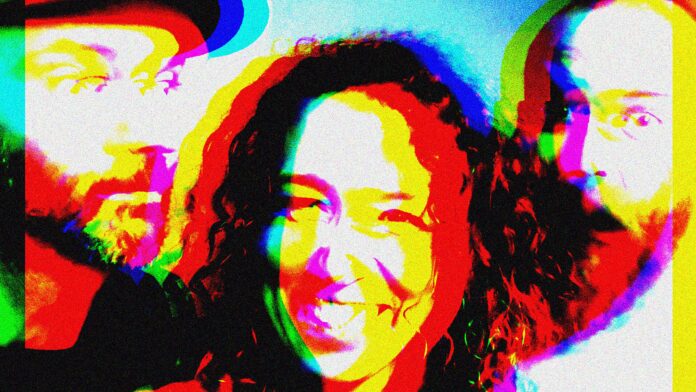 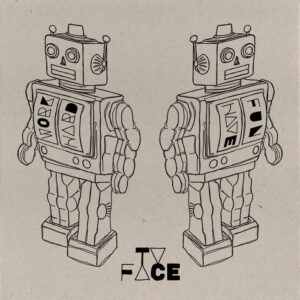 “All tracks are recorded and produced by the band in a variety of locations, including cellars, bedrooms and cupboards under the stairs” – TV FACE.

Formed in early 2019 TV Face are sTeVe (vocals/guitar), Brigit (bass/vocals) and Neil (drums), DIY, the post-punk trio from Lancaster unveil their new EP, unabated with the monthly release project which saw the band embark on a release experiment of firing out a new single at the end of every month with limited edition CDs to archive this achievement in the form of 3 EP’s due, excluding April, this month and December. And what’s not to love about music made when subjected to the domestic elements and observations of a globe soon to be swallowed whole by itself. It nails hard and hits heavy, superior to any studio, with one’s bedroom being the landmark for all good modern music.

It’s just absolutely fantastic. It’s music that smashes against the walls and floors and ceilings and changes shape upon each ecstatic, erratic, elastic bounce. Work Hard, Have Fun, the slogan stenciled on the gates to hell, or as we commonly refer to it – Amazon, starts the new EP from TV Face. An explosive, serrated slice of jagged schizoid noise pop, with those post-punk corners, kept sharp and on the edge of civility. We enter the workplace and our names are left behind. We just keep our heads down and our eyes firmly fixed on the stream of neatly packaged goods, gliding down the conveyor belt under the watchful eyes of the powers that be. But eventually, the subject snaps, the servants retaliate, the voice of God is a fat, bald, bloke with a nametag manning the television screens which archive the grainy surveillance footage from the warehouse floor. Machines fucking men. Monkeys chained to typewriters. And this is the soundtrack to that 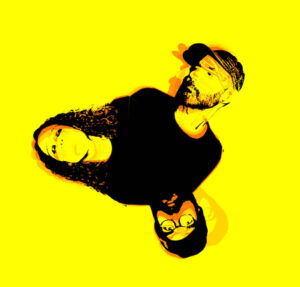 kind of atmosphere. That paranoia. That demented edge. That robotic routine. Each ebb and flow more intoxicating than the last.

It stops and starts and dips and dives and unsticks itself from the magnetic grids of the modern world. Acidic and scratchy guitars sketched as mathematical equations but played as guitar riffs, seem to spike and splinter when ripped from the ’60s and stabbed directly into the core of now. Intertwining voices are raw and howl aloud from the edge of outer space, left for dead but seeming to shake with their own unique cool and delicious sci-fi amusements. The whole robotic groove of zigzagging machinations seems to manifest and thrust forth as trials of fire blaze from behind. 1000 Homo DJs covering a psychotic Cramps. My Life With the Thrill Kill Cult covering the Sonics. All wired and weird and wild and fidgety. 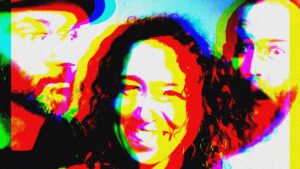 She Gets Old is a tale about being plagued by the intricacies and evils of social media. As the prolific, profile hounds sell pixels and papers documented the rise and fall of some poor sod who got lucky, someone’s life will always hang in the balance or simply laid to waste on the roadsides of a mogul’s interest in revulsion for the sake of entertainment pushed to its most invasive, bloodthirsty and extreme. It starts with an impenetrable drum beat and is swiftly joined by a scathing bass line which swoops and swings, slits, and slips deep into the pits of the tune’s oblique complexion. Melodic yet atonal, leftfield, and offbeat in places, but paces the cage with a knowing pop palette and a smart obsessiveness with each subtle slap of the delay and wonderful spit of predatory feedback as grotesque guitars are set alight, shooting sparks in all directions imaginable. It could be Devo.  It could be Dead Kennedys. It might just be the Pop Group giving the Primitives a warped once over. It could be the crash of the Cardiacs covering the kaleidoscopic melodicism of a drony Slowdive. It has the essential quirks and awkward pop sensibilities but also possesses that feverish, fearsome, hardcore swagger. Like a split 7 inch between Discord and Postcard, synthesized and synergized here with impressive results. 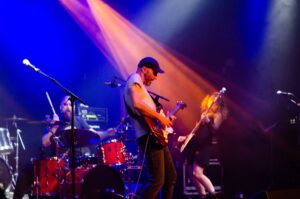 Happy Delusions seems to crawl and crack apart with its own voodoo ritual dance moves and broken bones of bass and drums. Cacophonous yet catchy guitars hover and haunt the air before an unstoppable chorus crashes against the senses and reduce them to twitches of electricity in the limbs. Dynamics, as in dropping out and diving back in, is a fascinating feature of the group and use this kind of weapon well. The loud/quiet or soft/hard bipolarities are built upon here with luminous new wave materials as one confidently inserts the hand into the teeth of a toaster and everything at that moment seems to make perfect sense. A song of perfectly executed peculiarities with a contemporary jolt radiating from each sprung device. A similar feeling emerges from the core of the utterly galvanic Orange Carbuncle. A sharply shaved guitar motif crooked like Steve Malkmus after he swallows a bitter pill in an attempt to remove the memory of a bad dream, moves with a murderous moodiness and effulgent sensuality. It’s subject to electroshocks to the frontal lobes, convulsive, jerking engines, and sputtering emulsion with disturbing angularity.

sTeVe and Brigit’s vocals are intermixed and inflamed, all snappy and sinister, yet harmonious and flying high, seem to rush and race and reach for the clean peaks above the smog of a modern city. It’s skyline cut to pieces by vapour trails from jet engines and atom bombs. Ultramodern surf for the dystopian ache. But wrapped up in a playful skin thicker than most prejudices would hope to pierce with one cynical glance. It’s a song about the current vogue about urban planning, often leaking into the topic of many common conversations. The future of our homeland now in the hands of some tracksuited buffoon who thinks an entire city should be made of cardboard and bubblegum the topic of many metropolitan talks. The destruction of the world that surrounds us as put to right thanks to that accelerated garage attack of a swaggering Bikini Kill covering the Buzzcocks’s Spiral Scratch EP in one fast rapture of bifurcated no-wave phosphorescence. All of which have been achieved, from the comforts, and confusions, of one’s home or perhaps, from the marble halls of the charm school.

Work Hard, Have Fun, out 28th August to download or purchase physically.

Ryan Walker is a writer from Bolton. His archive online can be found here.