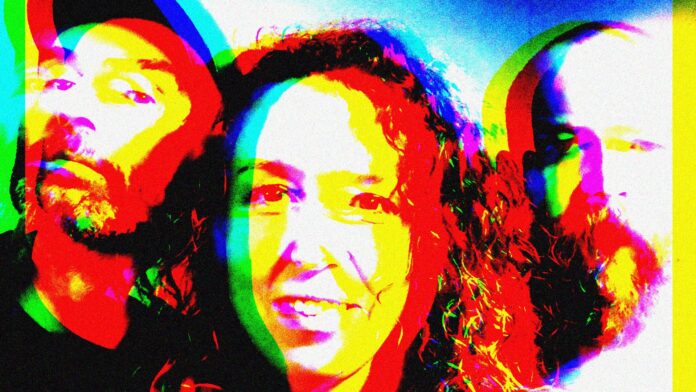 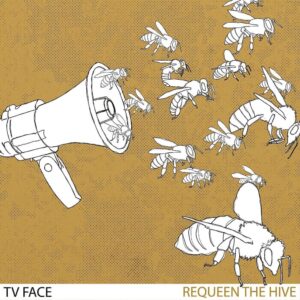 The new single from TV Face, Requeen The Hive, the title of which is shared with a new EP due out 25th December 2020, regularly reiterates the capacities of a band continuously shooting fresh holes through those old, important, alternative shapes left behind by the likes of everyone from untamed Brainiac to neurotic Buzzcocks, simultaneously blowing the smoke away from those almightly pistol barrels.

I have no time for nothing but words. Grammatically inaccurate but emotively on point. For TV Face the words seem to spill from me. So when a new single is released, I leap onto the laptop and I’m plugged in until pulled out.

As always the bass is wrapped in a thick, heavy leather boot, and ferociously finds itself up against one’s backside. The supersonic serotonin levels of the rhythm section- a live botched surgical procedure shared by bass and drums unpicking each other’s stitches, always come to life and kick against the now farfetched, utopian visions of a distant hyper-democratic beehive. Vocals, both raw and distorted, tarred and feathered, confront a smoldering axis of Rezillo’s 2000ad and a collectively confounded 2020. Wild sparks fly from the guttural buzzsaw guitars; with urgent hypodermic injections shocking things into appropriate states of horror. Zapped in baths of feedback; wrapped in swelling, effulgent wires, repulsed and empowered enough to pulverize the tough, petrol meat we are all forced to consume in this stagnant, nightmarish super-empire.

TV Face yet again manages to make sense of those moments of desperation on a desolate plane, a cloistered tether. They succeed in turning the postmodern subtexts of beekeeping into a brilliantly misshapen blitzkrieg Blondie and their post-atom bomb boogie, or an equally electric Cardiacs-Pixies-garage psychodrama for the currently abandoned masses on the edge of extinction through hellish boredom and banality. But, in spite of such insular, isolated stretches of hideous existence, the band are comforting in their sense of zeal and jagged edge style; always prepared to come forth and to deliver the warm, consoling glow of a kind of necessary spirit with their precise attack and boisterous swarms of hot noise.

And, in doing so, encourage one to reach for the outer fringes of this here reality, and upon having our fucking fingers snapped off by that their grotesque, shapeshifting escape; manage to musically, metaphorically, philosophically, metaphysically – make light of, poke fun at, peel back, piece together, a sizeable amount of that’s gone wrong. By scoring the war between what we want, and what we need; between mayhem and melodicism, between chaos and catharsis. Between acts of genuinely wanting to soothe one’s wounds in the hope they heal, and the frank, visceral enjoyment of dipping our fingers in jars of thick honey and digging them into the bullet holes shot at you from the breaking news screen. Between chemical imbalance and the human condition, in all things bent and beautiful whilst stood in the translucent shadow of a decadent space-age ashtray.

Formed in early 2019 TV Face are sTeVe (vocals/guitar), Brigit (bass/vocals) and Neil (drums). Their EP released later this year is available to purchase or download.

This review was written by Ryan Walker, a writer from Bolton, whose online archive can be found here.