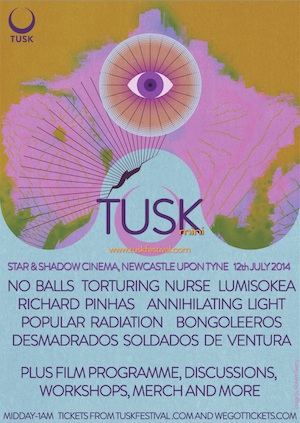 If it’s noise and weirdness you want, Tusk Mini is just the ticket. Louder Than War’s Paul Margree headed up to Newcastle to get a lungful.

Tusk Mini is a cut down version of the sprawling three-day Tusk festival that crams a frazzinglying eclectic but always brilliant roster of underground-psych-drone-noise-rock acts into the boho surrounding of the Star and Shadow in Newcastle each October.

With the bill for October 2014 already coming together, the organisers put together Tusk Mini as a mid-year taster to keep the droogs who routinely pack out the festival satisfied until the full freak show lurches into town.

As you’d expect the bill for Tusk Mini is eclectic and superb. Shanghai noise abusers Torturing Nurse playing their first ever show outside China is a big scoop. There’s also protean rock from No Balls and scorching vibrations from Heather Leigh and Stefan Jaworzyn’s Annihilating Light.

Unhinged bands in a beautiful, friendly city that has its own reputation for off the wall behaviour. What further reason do I need to book my train ticket and get up there? Damn right.

And so it goes. Having set off from the capital at an unfeasibly early hour, I arrive in Newcastle just in time to witness a trio of ragamuffin oiks stumbling down the street toward me, dressed in Bad Seeds-meet-Mexican wrestler suits. 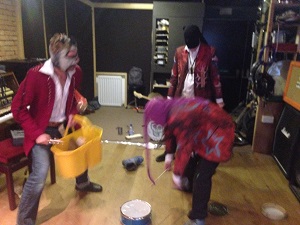 Why, I think to myself, it’s none other than rockabilly Dada-ist art terrorists Bongoleeros with a surprise parade to open the festival! With the Bongo boys’ megaphone exhortations leading us inside, smashing battered tea trays against the poor tarmacadam surface of the highway and letting out blood curling growls, it’s time for the festival to get going properly.

Things get off to a swinging start with the Technicolor grooves of Desmadrados Soldados De Ventura, an 18-legged lysergic jam band turning my poor East Anglian brain to toast and smearing a lumpy free rock paste all over it. Not bad. Not bad at all.

Following a mellow sit-down with prog guitar maven Richard Pinhas, interviewed by The Wire’s David Keenan in advance of his evening slot, things calm down a bit as we get ready for the evening’s chaos. I hang out in the cinema, where there’s a fantastic programme of avant-garde film and browse the merch stall for hard to find noise tapes and all manner of underground vinyl.

I also carve out time in my busy schedule to nip across to the petite studio space opposite the venue, where Bongoleeros reappear, playing several private shows across the afternoon. The show I catch is typically deranged, with plenty of tea tray hammering, haywire random guitar fuzz and a very real attempt to conjure the spirit of Alvin Stardust.

At 6pm sharp (ish) Dawson’s back, handing out books to a bemused audience, (“There’s no cost to you. All I ask is you read them”.) I grab a copy of Shirley Jackson’s The Sundial, seminal American gothic from the author of The Haunting of Hill House. Excellent. 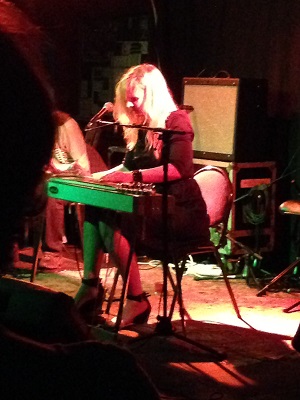 There’s no time to read it as Popular Radiation takes to the stage. Seated in front of two samplers, he coaxes forth a rumbling collage of voices and noise. Slowly he brings a sitar loop out of the background hubbub, distorting and flattening it, transforming it into a wave of gritty static, before taking things down again to a single vocal sample.

But this is pretty mellow compared to what came next. Annihilating Light is pure volcanic noise, mainly thanks to Heather Leigh’s howling pedal steel guitar. Behind her, Stefan Jaworzyn adds supplementary scuzz, alternating between flinty shards of distortion and extreme wang bar abuse.

I’d seen the duo’s first show a month or so earlier, and here they seem to have refined their blueprint slightly. There’s more texture and rhythm to the performance, peaks and troughs rather than full-on volume. I particularly like the section where Leigh lets loose with a high, operatic vocal at a pitch that seems to set every beer glass in the place ringing.

Lumisokea, in contrast, bring the beats back. An opening foray sees flying saucer drones reaching out into the hall, punctuated by sub-bass farts. It slowly morphs into a fractured post-dubstep soundscape, arrhythmic beats overlaid with bursts of modular sound.

Koenraad Ecker and Andrea Taeggi bob and weave like prizefighters behind their banks of kit as they sculpt the tunage, building to a pulsating Detroit throb. In the audience, the punters nod and start to shuffle. A bearded white dude in a dashiki gets on one, giving praise and thanks to Jah.

Towards the end, the duo break out the pure northern acid, throwing down a steely canopy of bleeps with what sounds like a wrecked fragment of Todd Terry’s Black Riot decaying over the top. Top drawer stuff.

“Are you ready for an Asian noise apocalypse?” read one of the missives from Tusk Mini’s official Twitter feed as Junjun ‘Junky’ Cao, aka Torturing Nurse, calmly sets up his stack of pedals. He looks like a mild mannered chap. But a few short seconds later, his T-shirt is off and his bondage mask is on and he’s letting loose the dogs of war, a heinous wall of pure noise filth. The audience go wild, pogoing, head banging, screaming, and giving themselves up to the noise in pure joy. 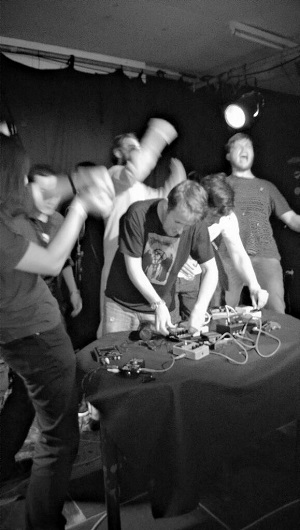 20 minutes in Junky goes walkabout, stalking round the audience, getting all up in their grill, acting the right snotty bastard. They love it, and they love it even more when Junky starts pushing them up on stage while he waits below, arms folded. Show us what you’ve got, he seems to be saying.

The loons on the stage go wild (see the photo opposite for evidence, courtesy of Joe Murray). There’s more pogoing and head banging, yet they seem almost surprised that no one is kicking them off.

Eventually, however, one of the moshers steps on a cable and the sound cuts out. Junky pulls off his hood and stalks off to the bar. That’s your lot.

It only remains for the angular repetition rock of No Balls to close the event. Defiantly primitive, their passive aggressive riffing is weirdly catchy. I’m reminded of pre-Brix Smith era Fall, minus the raddled genius of Mark E Smith. I like it, and my new friends in the audience do too.

All in all, it’s been pretty amazing. Great bands, with a schedule that ran like clockwork and a groovy atmosphere of northeastern madness.

As I head out in the Geordie night, I strike up a conversation with another punter, who turns out to be a Tusk regular. “The people who organise it, they’re amazing,” he says. “They do it purely for love. They’d do it even if there was no one else here.”

But it’s a testament to that love, that desire to champion the weird and experimental, that Tusk and Tusk Mini are well attended and so successful.

The next Tusk is on 10-12 October. Find out more here. Keep up to date via their Twitter feed.