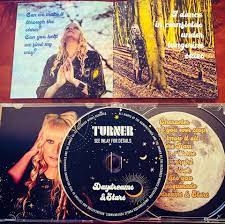 Welcome to the ten-track debut album from Salford-based soul singer/songwriter Louise Turner, who previously released the mini-LP This Is Turner in 2013 on Paisley Archive Records. Ian Canty’s reverie takes him on a turn into time and space…

Singer Louise Turner has clocked up session appearances with well-known artists like Elbow and Edward Barton, but she now takes centre stage on her first full-length collection, Daydreams & Stars. She had previously released the five-track This Is Turner mini-LP in 2013, which was recorded with the band DC Fontana. That record was issued on the great Detour Records off-shoot, Paisley Archive (see here for This Is Turner and a host of other delights including the amazing Studio 68! and Guernsey’s own mod heroes, The Risk). It was pretty well received at the time and drew comparisons to some legendary singers of the past too.

It may have taken eight years for the follow-up to arrive, but Daydreams & Stars proves itself well worth the wait. Louise wrote most of the songs on the album, with the opening number, Character, being penned by Mike Vindice. A variety of musicians collaborate with her on this LP, including Yves Altana, Ben Walker, Albert Widowson and Dan Kirkham, and everyone present acquits themselves admirably.

On listening to this collection, Turner’s voice made me immediately think of the late, great soul singers Sharon Tandy and Dusty Springfield. Though not sounding exactly like either, she possesses a voice that has a similar poise and confidence, but is also capable of imparting great emotion (and clear as a bell too). The material presented here gives her carte blanche to run the full range of her beguiling vocal talents.

The racing wah wah enhanced Character acts as a lively introduction to the album, with lots of hammer and neat psychedelic soul touches. Louise’s delivery is crystal clear, but crucially she never overdoes things. A light touch is always applied. Throughout Daydreams & Stars, she provides the focal point and heart to a record that is nicely diverse, laced with beauty and often quite stunning. The second offering is the only previously issued song, Don’t You Ever Stop, which was released by Detour in 2017. This has an assertive, rhythmic pattern and smart, choppy guitar chords, as Louise unravels the song’s tale of love and uncertainty with feeling and purpose.

Mr Know It All comes next, where Turner puts in a show-stopping performance on this finely-executed ballad. There seems to be something of a 1960s big production pop/spy movie theme influence here, but the treatment does enough different to present the listener with an offering endowed with a true freshness. She shimmers ultra-coolly alongside a pin-sharp guitar line and it all builds to something very special. It’s a real highlight of the LP and for me, certainly one of the best new tracks I’ve heard this year.

Here I Am flows with an infectious and carefree energy, a statement of intent enhanced by some great keyboard and jangly guitar work. Turner’s voice is excellent and the music matches up perfectly. There are touches of folk rock and R&B on Stay With Me, the band providing a high-quality example of restrained power, balancing a soaring, gospel-tinged refrain. Another breezy offering in Flower Girl comes next, with a brief, chilled psychedelic drop-out section providing a neat counterpoint to what is otherwise a strident and enjoyable piece of pop-rock.

The Clock has an unusual, near-acapella structure. The massed backing vocals and a tick-tock of a timepiece or two really works well in establishing a novel musical landscape. Along with the quiet acoustic drift of Miss You, this may represent an easing-off from the LP’s early intensity, but makes up for the somewhat lighter atmosphere with pure beauty. Masquerade includes hints of flamenco guitar, but this is classic pop music really, voiced supremely well and played and produced to perfection. The final song is the title track, using piano and strings and that wonderful voice in a way that is heart-breaking, but also so loveable. What a great way to end an album.

Daydreams & Stars ebbs and flows to its own individual pattern, meandering attractively along the way. As a result, it has the feel of a set of songs that just belong together. They build into a great whole and that is despite representing a range of tempi, sounds and feelings along the way. It adds up to an excellent record from Turner, an artist who deservedly steps out of the background and into the bright daylight on this fine collection.