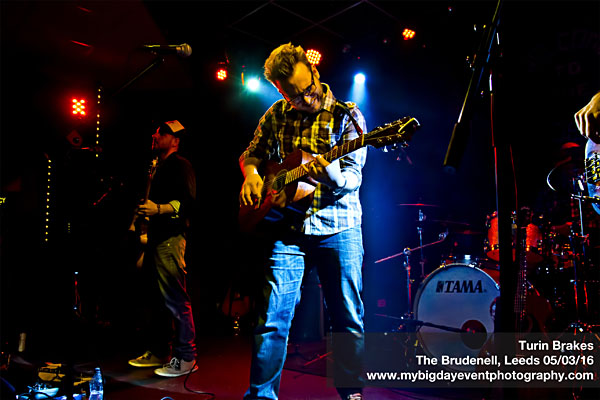 It’s always good to see a band really enjoying themselves on stage and with a critically acclaimed new album on the merch desk (and featuring strongly on the set list) Turin Brakes are clearly having a great time as they set The Brudenell dancing. idp goes along to take some snaps.

Turin Brakes at the Brudenell and I’m driving north, playing old favourites loud through the speakers ready for a night of nostalgia and restrained dancing but I also have their newest album in the CD changer (I’m old fashioned about tech stuff) and it doesn’t sound half bad. Not so much a return to form as a continuation of the rich vein that they’ve been mining for their whole career, it’s got all the melodies and harmonised emotion that you’d expect from a Turin Brakes album plus a nice bluesy edge to tracks like Keep Me Around and Rome and a classic in the making in the lovely Save You. 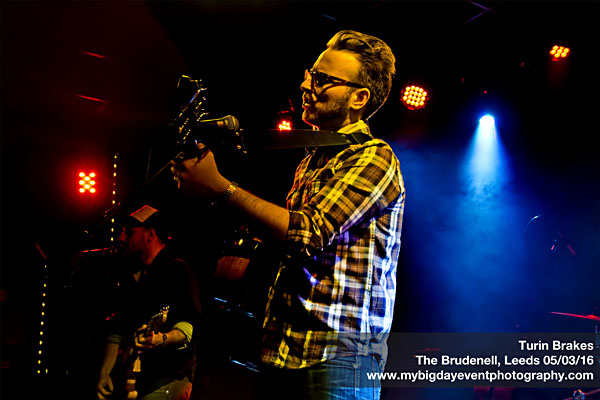 It all makes me a bit embarrassed that until recently I’d sort of lost track of Turin Brakes, since way back when they were charting regularly and seemed to have a gig as Janice Long’s house band, (probably just me but every time I had to drive somewhere late at night, there they were in the studio). When I saw this gig advertised my thought was “Oh good, I’m glad they’re getting back together, I liked them”, but as I do my prep I find to my shame that they’ve never actually been apart. In fact they’ve produced a series of excellent albums over the past few years, each subtly different in style, and ranging from the beguilingly pretty and folk tinged Optimist through to their latest, which is called Lost Property.

Along the way they’ve expanded from a duo to a four piece, with Olly Knights and guitarist Gale Paridjanian having been joined by Rob Allum on drums and bassist Eddie Myer. It’s a line up that’s versatile and powerful enough to do justice to the full range of their back catalogue without losing the delicacy of their early stuff. 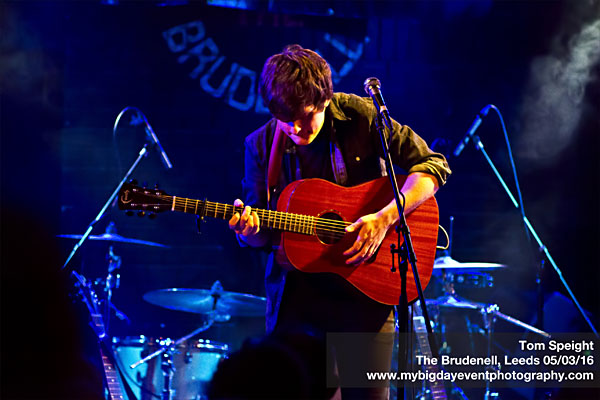 Opener is Tom Speight, who has plenty of good songs and a nice line in self deprecating humour. He admits to being a Turin Brakes fan and having queued to get his copy of Ether Song signed when it first came out and they’ve all been working together on his new EP A Little Love. Some of the Brakes’ deft way with a melody seems to have rubbed on him and he goes down well with the crowd and is definitely one to watch.

As Turin Brakes take to the stage the cheer that greets them is a curious mix of excitement and familiarity and it’s soon clear that more fifteen years since they first broke into the mainstream they still have a loyal, nay dedicated, following. All around me are people who know all the words to all the songs, including the new ones. Some mutter them sotto voce but a fair few go full bellow and I don’t think I’ve ever seen so much dancing at the Brudenell bar. 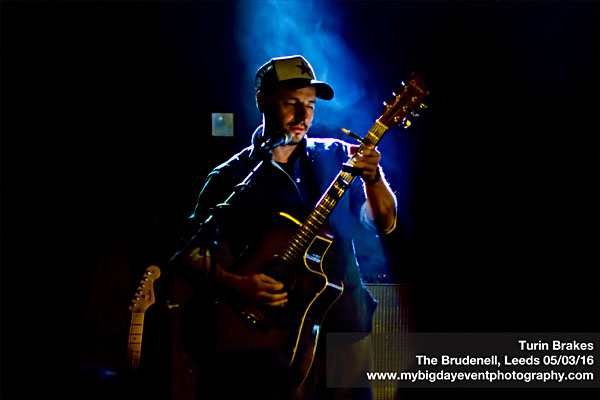 The show opens with three tracks from Lost Property, 96, Keep Me Around and the title track before dialling the clock right back for a falsetto Mind Over Money which starts small and bursts into raucous life. It’s the start of a pattern for the evening – Turin Brakes are past masters of the art of changing the atmosphere in a room by altering the pace of their performance.

Myer switches to a small upright bass for a suitably spacey Future Boy and then we’re into an up tempo section featuring Last Chance, (from the new album but already clearly a fan favourite) and Last Chance which shows the band at its most vital and rock and roll, it could be a lost Springsteen track. Then it’s a change of pace for Save You, which shows Knight’s voice to the best effect of the night, and Emergency 72 on which he starts out solo until the band kicks in and the track really comes to life as a complex collage of reiteration and harmony.

Of course Painkiller gets a huge cheer, but by no means the biggest of the night (like I said, it’s a knowledgeable crowd) and they finish the set with the atmospheric album closer from Lost Property, a haunting invocation to the Black Rabbit of Inle, Richard Adams’ grim reaper of the lagomorphs. I’m not sure how I feel about songs about rabbit mythology but it sounds great and it’s better than fifty minute prog rock epics about hobbits. 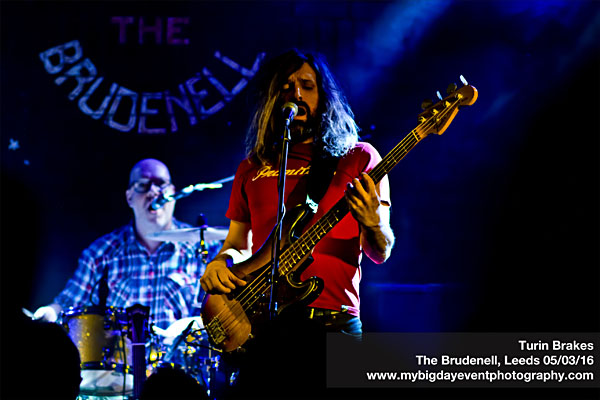 They file off but they’re not difficult to get back on stage. They’re clearly having a lot of fun and it only takes about thirty seconds of applause before they’re back for the first of three encores including a sweet echoey Over The Sea, a reggae tinged No Mercy and concluding with Red Moon. As we head out into the night there’s still plenty of singing going on and even a little bit of dancing in the street. The Brakes fans have had a great night and while I may not have danced much my toe aches from all that tapping. And the nostalgiafest? Well that turned into an evening listening to some excellent new music with a few old favourites visited along the way. And that’s got to be a recipe for a really great night.