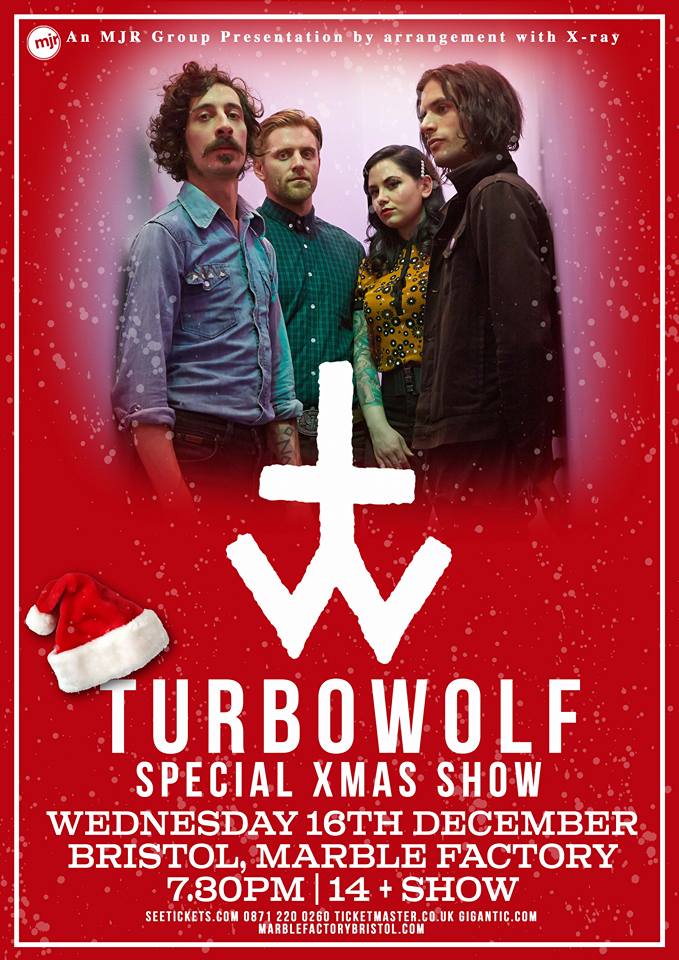 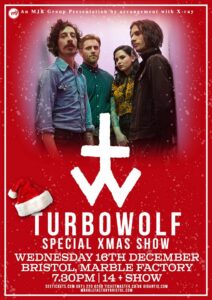 Tis the time of the year for the jolly frivolities of the office Christmas party. Where everyone shakes off the years pain with a blowout of regrettable proportions. It’s the same for Turbowolf. The drunken supply room fumbles and photocopied breasts are replaced by sexy instrument antics and some very impressive horizontal crowd surfing. The stage is where the ‘wolf do most of their business, and as anyone who has seen the band live can attest, business is good!

Turbowolf have had a pretty busy year. The release of their second album, ‘Two Hands’ in April, led to some serious touring around the UK and Europe, hooking up with Canadian duo, Death From Above 1979 for their hotly anticipated comeback shows. They even got to tour the hard nut that is the US for the first time with San Antonio’s Nothing More, and taste the Texas fever sweat of the SXSW music conference and festival. Back on home turf, the guys and gal are celebrating the end of the year with their largest hometown headline gig at Bristol’s Marble Factory.

Support for tonight comes in the form of Londoners, Dead! and Bristol’s mighty, Idles. Unfortunately I miss Dead! due to vege burger making duties, since my niece, Freya is visiting from OZ and I have the pleasure of taking her to her first proper gig. We rock up as Idles are pummeling the audience with their post-punk heaviness. These guys are very serious when it comes to having fun and tonight they seem to be having the time of the their lives. Either high on life or just high, the singer Joe and guitarist Mark ricochet off each other, getting all touchy-feely. “I think there is some sexual tension going on up here tonight” Joe exclaims, delighted.

Idles are a band on fire with that tension, and the burning intensity of their performances of late is winning round those new ears to their sound. New songs such as, ‘Queens’ distill that tension down to a direct to bloodstream form, grabbing hold of you tightly in order to shake you violently. Their beautiful noise intoxicates without any bullshit. Meat and two veg of the highest order, and a good stuffing before tonight’s proper main course.

Right from the get go, Turbowolf are turned on. Lead singer, Chris plays the part of the ultimate showmaster as the band take the stage, awakening the spirit and grabbing all attentions present. Third single, ‘Ancient Snake’ and ‘Rabbit’s Foot’ get the party started with all the necessary abandon to get the place dancing, with Big Jeff of course leading the mosh in the pit. This is a live set the band have been perfecting over the years. No new songs or covers, just the tried and tested. ‘Seven Severed Heads’, ‘Good Hand’ and ‘Nine Lives’ dig a tight groove thanks to the dynamic foundation of bassist, Lianna and drummer, Blake in which guitarist, Andy’s riffs flow thick and fast.

During, ‘Read & Write’ Chris rides the crowd in an impressive crowd surf. Lying atop the holding hands and not missing a vocal beat, he swims all the way without a care in the world. It’s an awesome and fearless show of trust that exists between he and his audience. They and he, know they are in good hands. As well as Chris’s dynamic stagecraft, I have always been impressed by his songwriting. Never afraid to broach fringe, esoteric and mystical subject matter in his lyrics, even working title of the new album, ‘Quell: The Ever Changing Sorcerer of Past, Present & Future’ shows he isn’t diluting the message in order to reach the masses. As someone who has seen the band grow from their early shows at The Croft, Turbowolf are incorporating far more poppiness into the raw rockiness that is their trademark. Songs such as, ‘American Mirrors’ and the newest single, ‘Solid Gold’ are seriously catchy motherfuckers that stick in your head like the best pop.

There is a lot of love in the room due to the passionate commitment this band have for what they do. Tonight, they seem to be on cloud nine entertaining in the only way they know how. Bassist, Lianna at one point even plays the Theremin attached to Chris’ keyboard, pushing her fretboard up against it in order to make it squeal. Turbowolf are one of the best British live acts playing at the moment and tonight’s show was the one of the best time I’ve seen them perform. I have a feeling 2016 and the new album coming is going to prove this without a shadow of a doubt. Believe, the wolf is at the door.