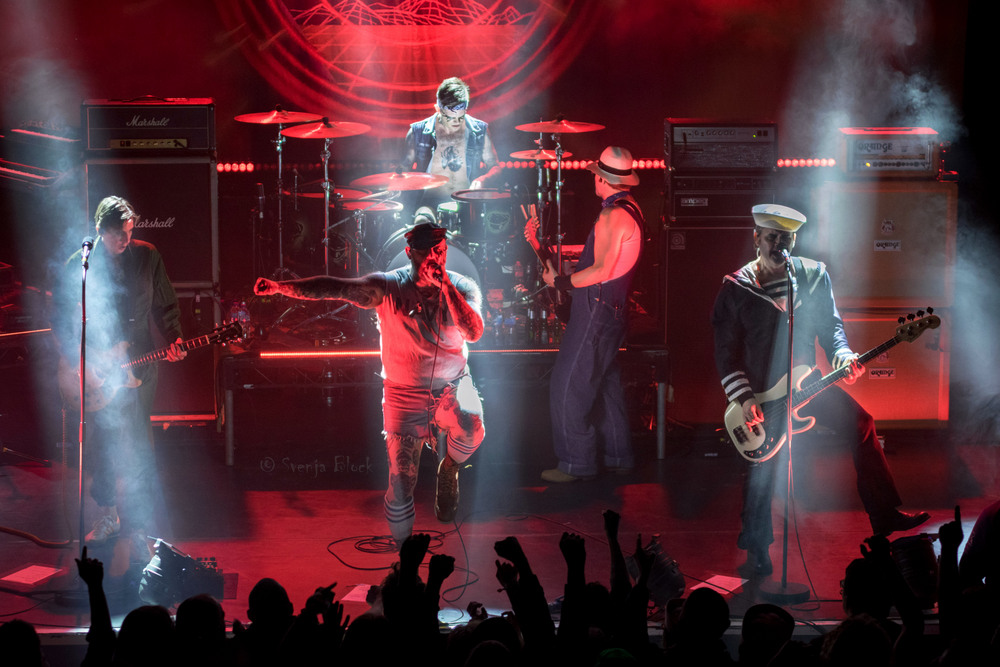 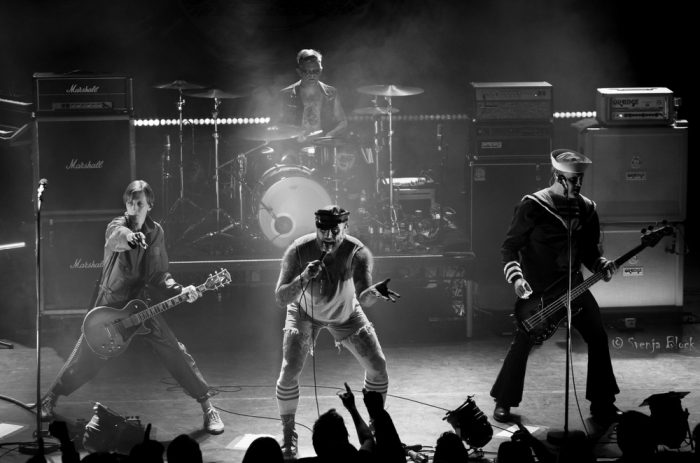 Turbonegro, who have been describing themselves as either the smallest mainstream or biggest underground rock n’roll band in the world, rang in the weekend on Friday night at Koko in London.

The ROCKNROLL MACHINE TOUR 2018 is underway and there was no stopping  Norwegian powerhouse Turbonegro from entering the big smoke. Nevermind the severe snowy weather conditions, hysterically dubbed ‘Beast from the East’ and ‘Storm Emma’ – no, the party was on.

All photos and words © Svenja Block

Getting into or out of London has become a major obstacle, with no trains departing after 8pm on Friday and some good folks getting seriously snowed in. I counted my blessings and the convenience of the Northern Line and living in London.

The majority of punk’n roll lovers and British/international Turbojugend members descended into Camden in the afternoon, where pre- gig gatherings and drinks were taking place at The Black Heart.

I had an interesting conversation with a friend the night before the gig about ‘RockNRoll Machine’, Turbonegro’s new and ninth album release. This is a band that has been known to divide their supporters and long-term hardcore following due to their progressive approach and their varying musical styles over the years and the departure of original singer Hank von Helvete (it’s fair to say that there have been several line-up changes in total).

Hank exited in 2010 and was replaced by native West Londoner Tony ‘The Duke of Nothing’ Sylvester, ex-president of the Turbojugend Fanclub and former UK press contact for Turbonegro.

I favour progressive artists – 2019 will see the band’s 30th year anniversary. They have produced albums that not only stood the test of time but have also reached cult like status like the classic 1996 release ‘Ass Cobra’.

Hang on, synth pop? Aren’t the boys’ musical influences The Stooges, AC/DC, Iggy Pop, The Dictators, Alice Cooper,Black Flag, Circle Jerks, and the Rolling Stones to start with? Sure, but also Kiss, The Ramones, David Bowie and probably a lot of other talent that knew how to write perfect catchy melodies….

Let’s see, according to vocalist Tony Sylvester, the band spent the last six years honing their skills and getting better at their craft. He feels the music that is being released now is stronger and more refined. TN travelled to the future and this is what they heard! 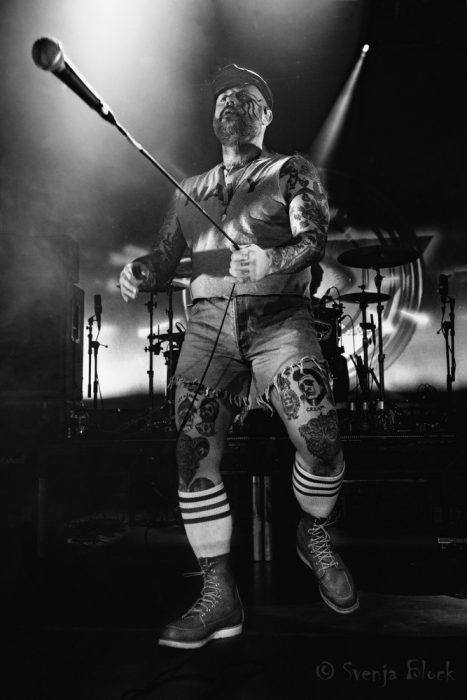 Time to introduce and mention the importance of keyboard wizard Crown Prince Haakon-Marius, an excellent musician and good friend from the Oslo music scene. The band had a lot of fun in the recording studio and found the whole experience of finally acquiring such an accomplished player very inspiring. Prince Haakon-Marius filled a big gap that was left by former band colleague Pal Pot Pamparius.

I love ‘RockNRoll Machine’ and I welcome the band’s progressive approach and ability to evolve as professional musicians. One of my fave albums of 2018, it has been on heavy rotation since its release.

All good and dandy, but what does the new material sound like live?

There was plenty of time to investigate and find out because the new album was nearly being played in its entirety if memory serves me right.

The band’s visual appearance and image plays an important part of the Turbonegro experience,  too and must not be underestimated: The boys’ signature make-up is expertly applied, tonight Guitarist Rune Rebellion wears shades topped with a  Panama style hat and dungarees while Euroboy is decked out in a boiler suit. Happy Tom is wearing his famous sailor costume and Tony is feeling sexy in short pale blue denim shorts, a sleeveless top and high socks, showing off his inked body.

‘Hot for Nietzsche’ is already familiar by most and goes down well with the party crowd, ‘RockNRoll Machine’ , Hurry Up & Die’ and especially ‘Special Education’ are brilliant sing along anthems.

I get distracted several times trying to take photographs around the venue and memorising mainly Tony Sylvester’s humorous banter and storytelling.  My reviewer for the night has gone AWOL  somewhere outside in the snow chaos. Ah well. He’s quite the entertainer, though –  in 2012 he asked an amused Electric Ballroom audience if they remembered the 1990’s (“Do you remember Britpop?”) and tonight is no exception. TN don’t give a flying hoot about political correctness or dictated musical direction, no, this is an extremely smart band that does address current affairs with wit and sarcasm.

He’s going into great detail about what its attendees used to get up to there and elsewhere. Ummmm, let’s just say it involved plenty of sexual activities without using any contraception, a reference to the now grown up children of the 1990’s that are a result of the drunken shenanigans and other interesting related adult content.

I remember those Feet First nights with DJ’s Jonathan and Eko ca. 1991 – 1992, I was a little Pop Kid myself for a while. Good times indeed.

We get to hear older material from brilliant albums ‘Party Animals’ and ‘Apocalypse Dudes’ plus an odd, slightly out of place sounding medley of Queen’s ‘Bohemian Rapsody’ and ‘We Will Rock You’.

The final song during the encore is the highly anticipated, unavoidable and legendary ‘I Got Erection’ from the album ‘Ass Cobra’. 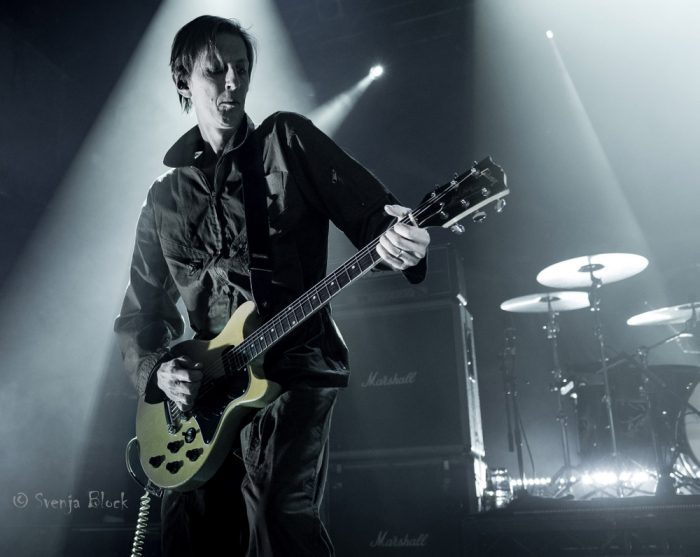 “I Got Erection” chants could be heard before Turbonegro entered the stage earlier tonight and now is the time for Happy Tom to assist the front man with some spoken word and to instruct the crowd to divide into two large groups to sing part of the all important ‘I Got Erection’ verse.

I’m positive the young Scandinavians swerved to the left and the hot Italians to the right…it’s beautiful to see both groups meeting each other in the middle and erupting into one chaotic moshpit.

It’s the perfect way to end this hugely entertaining evening and very satisfying to see a band enjoying themselves live. I managed to remain focused, too….another indicator of a good evening. If there were any sour grapes in the building tonight I certainly didn’t come across any.

Yes, the new songs do sound very good live, it’s as simple as that.  I would advise to play ‘RockNRoll Machine’, the album while driving in your car during a warm spring day and play ‘Special Education’ on school disco nights.

Life’s a bitch anyway – let’s show that bitch some lovin’. 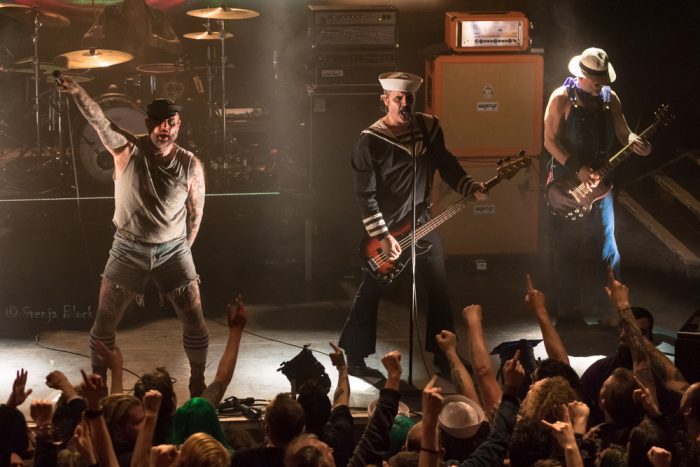 More info on Turbonegro can be found on their official website: https://turbonegro.com/