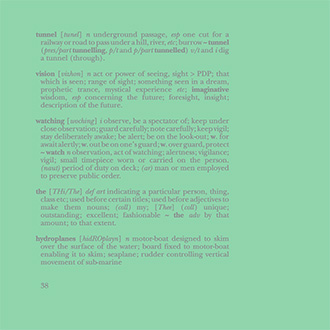 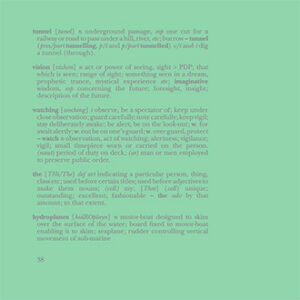 Clear vinyl album featuring 8 tracks from the band’s demos recorded at the Cargo Studios in Rochdale which were overseen by Martin Hannett and Peter Hook plus Emotionless, taken from a live show at Bristol Trinity Hall during March 1981…..LTW’s Ian Canty looks at it from all angles….

Forming in Blackpool in 1979 as Punk covers act the Pose, Tunnelvision changed their their name early on in the next year and started writing their own material. Chris Anderton, who had at first been the band’s guitarist, now took over vocals as well from the departing Chris Shea in time for their inaugural gig in February of 1980. The rest of the first version of the band was Andrew Leeming on guitar, Phil Barnard on drums (soon replaced by Tony Ashworth) and bass player Paul Swindles. The fledgling outfit soon formed a supportive relationship with local band Section 25, who mentored TV and played alongside with them at New Order’s third gig.

There they managed to capture the attention of Factory Records’ duo Rob Gretton and Martin Hannett. The pair offered to release a single by the band. To this end they recorded some demos at the Cargo Studios in Rochdale and this initial session makes up the first four tracks here (Hannett remixed songs 1 and 2 at Britannia Row). After some more local gigs alongside various other Factory bands and Paul Swindles being replaced on bass by Tony Butterworth, Tunnelvision returned to Cargo with Peter Hook at the controls in the early spring of 1981. These efforts make up tracks 5 to 8 on Watching The Hydroplanes.

Watching The Hydroplanes and Morbid Fear finally saw the light of day as FAC 39 in June of ’81, but good press was hard to come by, with most of the inkies turning their noses up. Troubled times were ahead. The band struggled on as a three piece of Ashworth, Anderton and Butterworth as Leeming decided to return to Blackpool after the band’s maiden London gig at the Kentish Town Form. Performing with a drum machine after Ashworth sold his kit finance his purchase of a guitar, Tunnelvision ground to a halt in the back of some not too well received live showings. The unsuccessful audition of new drummer Craig Evans signalled the death knell for the band.

After Tunnelvision split Anderton and Butterworth formed Vee VV who released a couple of good records in the mid-80s, including the Boom Slump 12″ EP on John Robb’s Vinyl Drip. I saw them play a storming gig at the Joiners in Southampton at around that time and they resumed operations recently, with their next gig taking place on 5th October 2019 at the Dulcimer Bar Chorlton, Manchester. Tunnelvision themselves reformed early in the 21st century, playing a few gigs from 2003 to 2005 and releasing a three song CDEP.

The music press of the time seemed to have an instant downer on any Factory bands who weren’t Joy Division/New Order, labelling almost everyone else as poor copyists of the aforementioned boys and girl. Occasionally that may have been the case, but for the most part more or less anyone with a FAC number against their name got slaughtered in the same fashion regardless of their qualities. Totally unfair, but that is how it was back then.

Tunnelvision themselves copped a bit of that flak and the question is, was it justified? To be totally honest there are a couple of moments that are slightly reminiscent of Joy Division (Glenn Miller is one song that has a similar rhythmic approach), but for the most part they offered something different of their own if you give them a chance (unlike the music press hacks of yore). On some of their best tracks like both sides of the Watching The Hydroplanes single, they pursue their aims with a calm diligence at odds with JD’s mania, being eerie, potent and restrained.

Having both Anderton and Lemming meant that there was the opportunity for some guitar interplay – something that comes to fruition on The Man Who Would Be King and 100 Men, which builds up a real heady atmosphere of doomy grit, but also comes with a good tune too. The thrashier Old Comrades is a lot of fun, more early Theatre Of Hate than any Factory band. Emotionless shows they could kick up a storm live and Whitened Sepulchre, the final track here, is sparser with electronic crashes and probably is a good pointer how Tunnelvision might have sounded in their final months.

It goes without saying almost that Factory Belenux have put together this collection with a real love for the subject and attention to detail, with an inner sleeve that has a detailed history of the band by James Nice, plus a repro of the flyer for Tunnelvision’s Forum gig with New Order and Safehouse (sounds a reasonable bill for three quid!). The clear vinyl looks good too.

Tunnelvision only had two years between forming and splitting up, which is a shame as they clearly had a sense of purpose and style that could have been developed further. Given more time and luck they might have come up with something to rival Post Punk’s big guns, but alas it was not to be. This new collection may ultimately be potential that was untapped, fragments of a band still finding their feet. But at times Tunnelvision here display a rare confidence and stubborn individuality, which is precious.