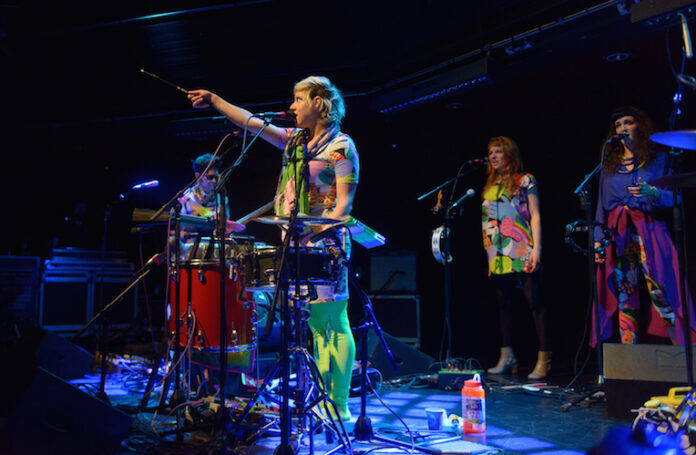 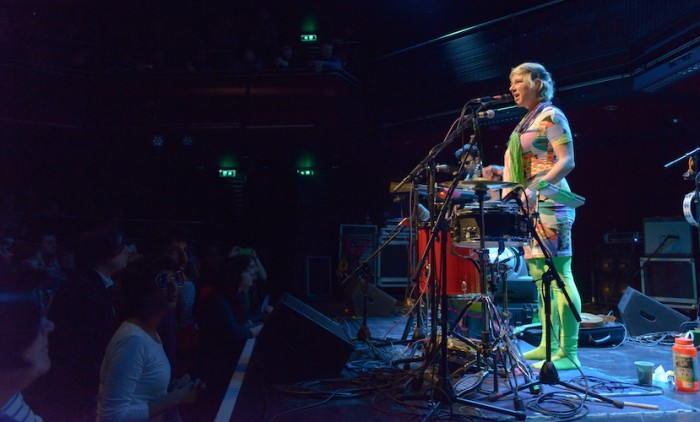 Tune-Yards brought the party to Gateshead on this grim Sunday evening, we’re left beguiled and over-excited by Merrill and Nate. This will go down as one of the most magical shows we will ever experience.

Tonight sees two masters of the loop pedal from opposite ends of the spectrum take to the stage in the phenomenal Hall Two at The Sage. First up is the wonderful Nathalie Stern; these two acts couldn’t be anymore at odds with each other. Nathalie’s dark, atmospheric and epic tracks, its an astounding amount of noise for one person alone to make.

There’s an intense atmosphere throughout the set, the huge crowd that has amassed nod their heads perfectly in time. This sea of entranced lemmings watch on amazed as the incredible walls of noise are projected upon them. This is a real treat to open the evening, but in the back of their minds everyone is waiting for the party to start.

That party is never too far away either when Merrill Garbus and Nate Brenner are in the building, tonight’s crowd were not to be disappointed either. Following a real dark set came the light, firstly in the form of the bands incredibly bright outfits and then the instant euphoria that is Tune-Yards.

From the outset the crowd is awash with bodies, people throwing all manner of shapes it’s an incredible sight very rarely seen in The Sage. However, there is a turning point in the set, as the opening chords to Gangsta ring out through the venue. Its like the whole crowd are launched into orbit, its incredible that one song can have such an insane impact. 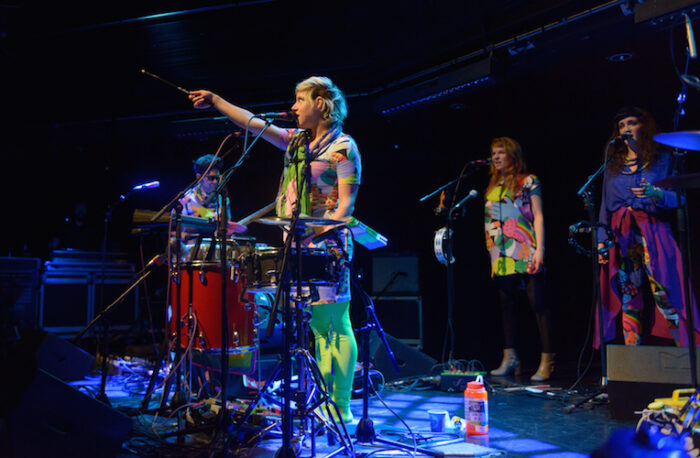 The party vibe is maintained though, if anything this dark miserable Sunday night has been transformed into a Friday night rave. With tracks like Stop That Man and Fiya though it’s hard not to dance, the atmospheres electric and its plain to see that Merrill is overwhelmed by the reception they’re receiving tonight, but it’s so well deserved.

This is all before they unleash the big guns though, first in the form of current single Water Fountain, which only stokes the party’s fires. It’s also greeted by the biggest crowd sing-along of the evening, tonight is reminding me ever more of seeing M.I.A for the first time, its just one incredible party. The loudest cheers and the biggest reactions are all saved for Bizness and rightly so, a track so utterly brilliant it will never leave your head once you’ve heard it.

The band all seem to be moved by the reaction of tonight’s crowd, Bizness compounds that in one euphoric expression of love towards Tune-Yards and rightly so. It’s an absolutely phenomenal set, one of the best I can ever commit to seeing at the Sage and I had the pleasure of being there the last time Tune-Yards played. Absolutely masterful, Merrill’s ability with a loop pedal is second to none and the whole set was a beguiling warped Technicolor phenomenon.