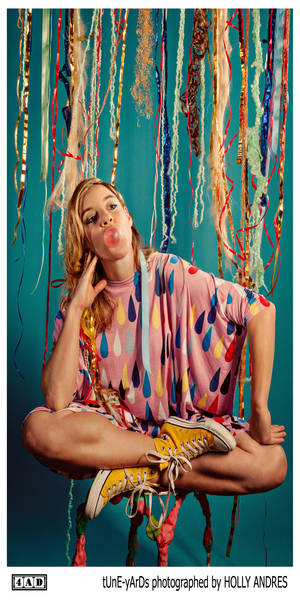 tUnE-yArDs, aka Merill Garbus and Nate Brenner, have come a long way since Garbus recorded their first album, 2009’s Bird-Brains, on a dictaphone. Their third album, Nikki-Nack, was recorded in a studio with big name producers, drums and synths, and what a treat it is. Despite its more polished finished, Nikki Nack has all the originality and genius of the first two albums.

Find a New Way is the first track of the album and pleasantly assaults your ears with drums and semi-chanted lyrics,  a theme that runs straight into Water Fountain, which has been enjoying plays on national radio stations. It’s irresistibly catchy, a slice of electronic, eclectic experimentation which works in ways you don’t expect. “No water in the water fountain, no phone in the phonebooth” Garbus sings as the song reaches a chaotic, brilliant drum-lead climax.

Drums are the instrument of choice for this album, giving an almost tribal sound at times and lending the perfect backing to Garbus’s unusual and powerful voice, which is perfectly at odds with her outward image of natty hair and even nattier clothes.

Look Around has some beautiful lyrics – “on the one hand there’s what sounds good, on the other is what’s true” – but it’s Hey Life where the true talent of tUnE-yArDs’ lyrics are shown off, weaving a tale of the perplexities of the human condition. Musically it gets your toes tapping; it is one of the stand out tracks on the album.

“Why do we dine on the tots?” is an utterly bizarre spoken word nursery rhyme about eating children, but somehow it manages to sound neither pretentious nor plain silly. However there is definitely a whiff of drama student to it that is difficult to shake. This threads neatly into Stop The Man, a track which changes the tempo completely with its pure bass intro and clear dubstep influences. tUnE-yArDs dubstep is much more palatable than its less experimental counterparts.

The second pre-released single from the album was Wait for a Minute, which is an exploration of feelings of anxiety and unease. Left Behind is a lament to a lost city and brings in the titular Nikki Nack refrain. This particular track got me tapping my pen along to the rhythm and it’s a song I would happily dance to.

Finally the reggae flavoured Rocking Chair and the almost a capella Manchild bring the album to an end, a perfect conclusion to an record full of fresh new sounds.

We wouldn’t expect anything less from Garbus, but it’s clear she’s done it again, serving up the perfect mix of experimentation, intensely clever lyrics and rhythms which get to your very core. Not every track on the album is a stand out track (I found myself skipping through Skip-O and Time of Dark) but the songs that are good are really, really good. “I’ve got something to say”, she sings in Manchild, and it’s hard to disagree with that.