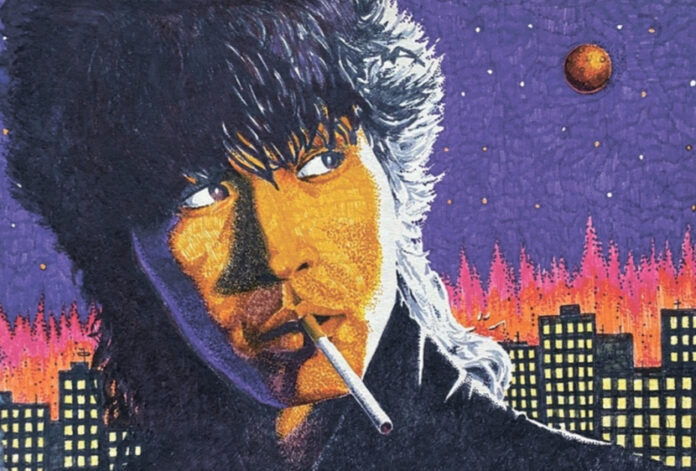 With the title playing around the name of his legendary song “The Summer Will be Over Soon”, the display at St. Petersburg’s K-Gallery presented a different dimension of Soviet post-punk legend’s life.

In the Russian-speaking world, the name of Victor Tsoi is emblematic of Perestroika and a turning point in rock music. The influence of Tsoi and his band Kino on the following generations of post-Soviet musicians can be compared to that of The Cure in the West. And numerous videos on YouTube produced by teens strumming Tsoi’s songs prove that Kino’s cult following is a hereditary phenomenon.

The Western world is vaguely familiar with Soviet underground and particularly Kino, and several attempts have been made to promote or spread this music beyond the USSR or modern Russia’s borders. Joanna Stingray, an American singer and music producer, came to Leningrad in 1984 where she was introduced to the turbulent life of Soviet counterculture artists. Smitten with the discovery, Stingray started seeking loopholes to smuggle the music from the USSR to the United States. Eventually, Kino was featured on Red Wave: 4 Underground Bands From the Soviet Union, the compilation she produced for the Australian label Big Time Records. 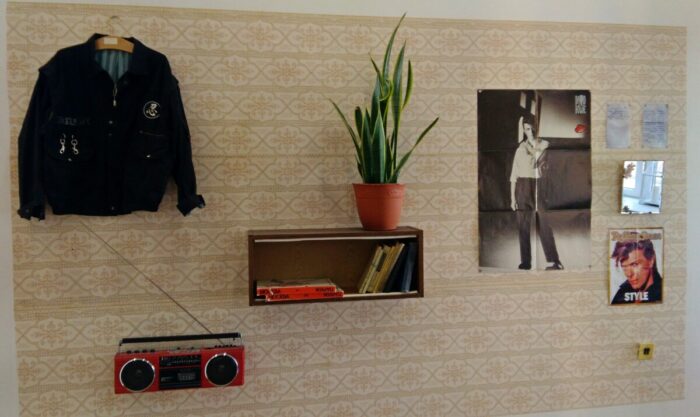 Screened in the UK shortly after its premiere in Russia two years ago, Leto (The Summer), a nostalgia-driven film directed by Kirill Serebrennikov, introduced a visual, though slightly distorted, image of Tsoi. Performed by Teo Yoo, the character seems to be lacking brutality and graphic masculinity associated with the musician who had a striking physical resemblance with his favourite Bruce Lee. The collection of art presented at K-Gallery showed a different life dimension of Russian post-punk legend. And perhaps here Yoo’s version would fit the puzzle.

All the artworks displayed at the gallery are from the collection of Natalia Razlogova, spouse of Victor Tsoi. Being secretive, Tsoi rarely showed paintings, drawings and polaroids – created during the last few years of his life – to his friends or bandmates. By the time they were unveiled, about ten years ago, those items had been preserved in a “time capsule”, as Natalia calls it, evoking Andy Warhol’s concept. Some of those artefacts reveal another side of Tsoi’s personality as well as shed light on his personal life – two things among others the musician apparently wanted to keep to himself.

Indeed, such exhibits as drawings produced on oilcloth and polaroids lead one into the auteur’s comfort zone. Victor Tsoi, whose name and music is all the more influential in light of the current events in Belarus, appears here a silent observer rather than a resilient fighter. Perhaps, this contemplative version of Victor would prefer to remain unnoticed while watching the activists marching on the streets of Minsk and singing Peremen / Our Hearts Demand Changes. This unofficial hymn of the Perestroika time and a legendary song by Kino has remained an anthem for those fighting for freedom.

Nevertheless, in the booming years of Kino, Victor’s “internal” visual artist was always overshadowed by his image as the rock star and idol of generation. Upon the time the band was formed, Tsoi had quit his studies at the Leningrad Art School and enrolled for a vocational training programme in carpentry. Such a move felt natural for a non-conformist musician professing post-punk/new wave aesthetics. His passion for visual art never vanished though. Even the name of the band, though always explained as a random choice and a result of a pun, refers to visual arts (in Russian ‘kino’ means cinema). Interestingly Tsoi wasn’t the only fine artist in the band – the drummer Georgy ‘Gustav’ Guryanov shared Victor’s keen interest in pop art and neo-expressionism, particularly Warhol and Haring. Both Tsoi and Guryanov were leading members of the “New Artists” group, a non-conformist movement formed by Timur Novikov. 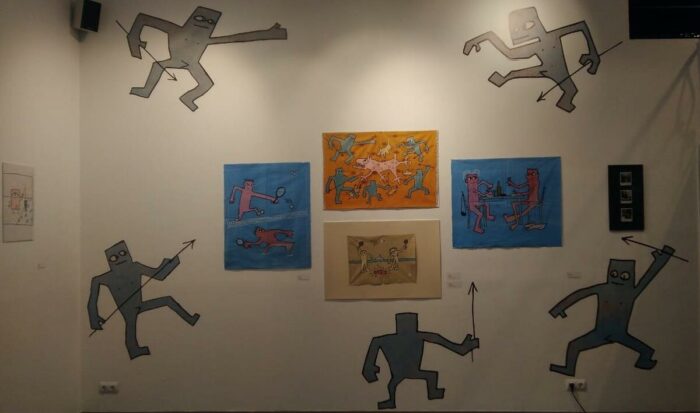 Cartoon-ish aesthetics of the oilcloth and felt-tip pen drawings seemingly pay homage to Haring, although Tsoi only saw the original works during his trip to the US in 1989. Colourful Love Story looks like an ironic interpretation of Bill Asprey’s comic strip Love Is… Bright palette and comic-like features of the oilcloth works remind how escapist they were in the world where all Soviet families had the same kind of waterproof fabric on their kitchen tables. 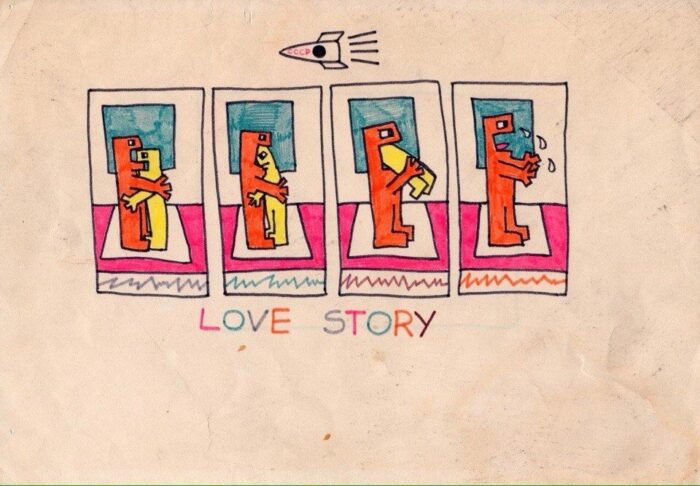 Being something of a visionary, Tsoi seems to have envisaged his own future. The musician, who died in a car accident in August 1990, had been relentlessly employing the motif of a road trip in his work. One of the paintings on canvas, The Road, depicts a driver keeping his hands on a steering wheel and seemingly crossing the rays of psychedelic streetlights. Another one portrays a ghostly pale figure seating at the back seat of the car. The features of the man look very similar to that of Tsoi.

Despite the controversial opinion on the musician’s artistic heritage, Tsoi is still considered a forerunner of many ideas that have arisen in contemporary art over the following thirty years. In his book on the display, art curator and journalist Dmitry Mishenin states that Victor Tsoi had produced his first neo-academic works before this trend took shape in Russia. Thus, dated 1990, The New World demonstrates the collision between frail forms of classicism and high-speed vigour of the future. The ancient torso also alludes to monotonousness of art education, when all students are suggested to sketch the same model. Regardless of any verdict from professionals, Tsoi’s name stands on its own. Created by devotees, murals displaying his stern-looking portrait and affirming motto “Tsoi is alive!” in different parts of the former USSR, suggest that Victor Tsoi made the most of his time to reach the unreachable. The future. 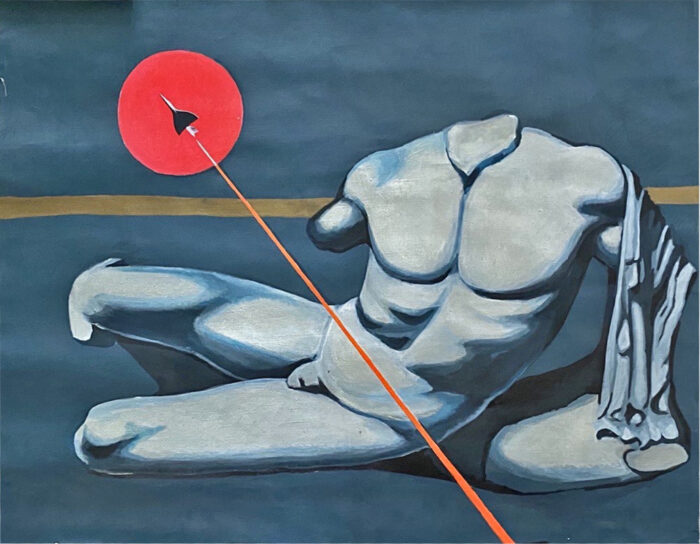