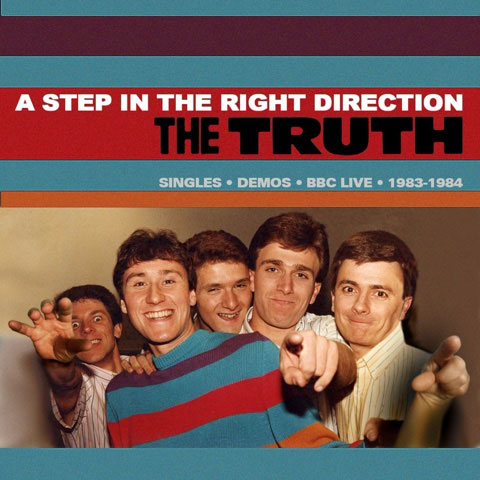 Mod was a very resilient beast during the 80s, having several resurgences after seemingly being all washed up. Ironically Paul Weller winding up the Jam and setting up the Style Council launched a fresh wave. It meant that he concentrated more on his Respond label and their roster of 60s influenced acts and others followed in their wake. Eschewing the Jam/Who archetypes of the revival of 1979, this incarnation of modernism concentrated more on Hammond organs, Motown dance rhythms and feelgood melodies.

Which is where the Truth come in, or rather before that Nine Below Zero, who had got increasingly more Mod as time went on and by their third LP “Third Degree” were on “The Young Ones” singing their very Jam-style “Eleven Plus Eleven”. The band folded soon after its release, but main-man Dennis Greaves (looking a ringer for Billy Murray from “The Bill” and “Eastenders” in the sleeve booklet) and bass player Brian Bethell quickly assembled the Truth with Mick Lister coming in on guitar, ex-Fabulous Poodle Chris Skornia pounding the Hammond plus drummer Garry Wallis (I’ve a feeling I read somewhere that Rat Scabies had a chance of the drum stool, but knocked it back to stay with the Damned), consigning the blues of their previous band to the bin to forge ahead into more soulful and danceable waters.

The first disc here gathers the single tracks on solely on the evidence here I can only conclude that the Truth were a decent if slightly lightweight pop act in the mode of the Style Council or late era Jam, with some catchy songs but a lack of power and direction, a bit like the Faith Brothers or Big Sound Authority. However the early demos sides tacked onto the end reveal a slightly different picture – “Come On” brings to mind a less threatening Stranglers and there are nods to the kind of New Wave pop Elvis Costello specialised in. Perhaps record company meddling meant they weren’t quite the band the A sides of the singles might have led you to believe. The single version of “Confusion Hits Us Everytime” was a respectable enough number but lacked the necessary attack to present them as possible successors to the Jam’s Mod pop crown and sounds out of place when near these rough but promising first takes.

Though entertaining on record the proof here on the other two discs is that the Truth’s real strength lay in live performance. CD 3 features a performance from a hot and sweaty Marquee in front of a partisan set of fans, it’s a rough, “good bootleg” sounding recording and what it lacks in finesse of sound it makes up for in sheer spirit – it takes you there. You really can believe that in 1983 they were a pretty hot ticket in London and getting popularity further afield.

The BBC selection is of course of a much better sound quality (An “In Concert” programme plus “Sight And Sound In Concert” which featured on Radio 1 and BBC2 simultaneously) and with the clarity you can hear things like the slightly Beat sounding “Me and My Girl” and the Joe Jackson-esque “It’s A Miracle”. Though clearly 60s influenced they had updated their sound to take in the contemporary music scene – quite unlikely Nine Below ploughing their lonely but authentic Blues furrow. They patently were a totally different thing live and with much more power than the early records possessed and could certainly whip up a crowd.

Around this time some bright spark, possibly in A&R at Warners, practically sunk their career in the UK with the awful “Sounds Like The Truth” campaign in the “Sounds” Music paper. This ensured (1) the NME, Melody Maker and Record Mirror hated them and (2) “Sounds” writers who weren’t well disposed to them resented them even more. After this set-back the band gradually moved towards a more standard “rock” sound in pursuit of success in the US and split towards the end of the decade.

This collection will appeal more towards hard-core Truth fans and Modernist historians, but there is a fair amount here to interest the casual observer and the 80s pop fan and as ever it comes with a booklet full of information about the band’s early days. If nothing else it proves in 1983 you wouldn’t have regretted spending a night in the Truth’s company and as a reminder of their live prowess this certainly fits the bill.

All words Ian Canty whose author profile is here