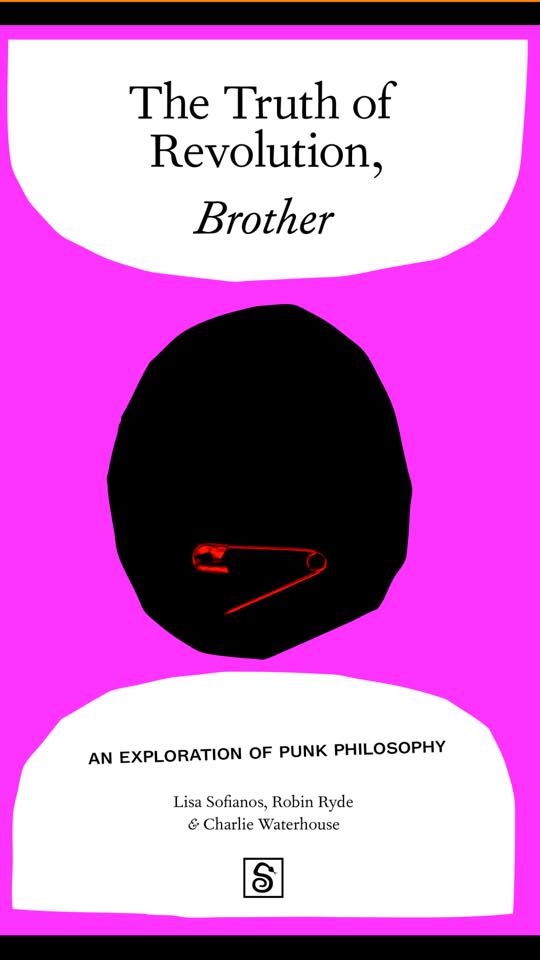 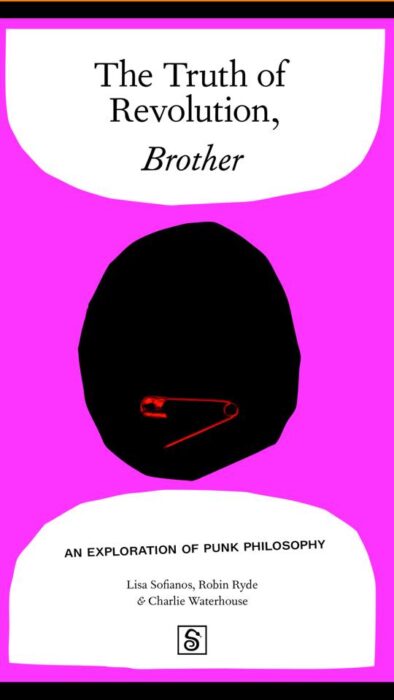 The Truth of Revolution, Brother: An exploration of punk philosophy.

The main grumble when the original hardback edition of this book came out, priced £32.00, was that it was pricey considering it featured the ‘Pay No More Than’ band Crass heavily. Now out in paperback – the only difference is the colour-pages of  ‘original artwork’ are omitted – it’s less than half the price. So, criticism listened to and acted-upon. Cool.

Louder Than War never reviewed the hardback so makes up for it now as Ged Babey weighs up whether or not it is ‘probably the most inspirational book on punk as a force for good’ there has been.

One of many brilliant quotes from this engrossing, lovingly put together book is this one from Jim Gnarr, one time Mayor of Reykjavik…

And this is Ian MacKaye from Minor Threat, Fugazi and Dischord Records…

“My idea of punk is that it is a free space, a space where ideas can be presented. And without being dictated by a profit motive.”

Another which gets to the crux of why this book is fantastic, from Gavin McInnes (one of the founders of Vice)…

“What I think is interesting about punk, as far as the ethos and mentality of it goes, people assume it was a unified thing. But it was at least two disparate groups, and they were based on class.”

Which is what makes this book a success. The fact that it acknowledges the fact that there was never and still is no Punk rulebook. No consensus. Every single participant has a slightly if not completely, different outlook. atitude, opinion or idea of what punk is, was and how it influences how you think about life.

“The Truth of Revolution, Brother, is the result of a year spent with some of punk’s most influential figures.

“From legendary British anarchos Crass to US stalwarts Fugazi and Dead Kennedys; first generation figures The Adverts to contemporary carrier of the flame Jeffrey Lewis, this groundbreaking book investigates the approaches and life choices made by the people associated with this most misunderstood genre. The result is truly life-affirming. From the fields of Essex to Iceland’s corridors of power; the West Country to Washington DC, 30 interviews gently reveal a host of strategies for living that are more meaningful now than they were back in punk’s heyday.

John Robb is in it, as is Mark Stewart (shot away), Pete Fender (very astute), Dunstan Bruce from Chumbawamba (interesting apropos Tubthumping), David King (the man who designed the Crass logo), Tony D (Kill Your Pet Puppy ‘zine), and a few people like Allison Schnackenberg and Dominic Thackray who I was unfamilliar with.

The book has come in for an unfair amount of criticism on ‘social media’ as there are a substantial proportion of the older punk generation who do not believe that punk and philosophy go together at all … or at least can be best summed up in slogans. Slogans short enough to fit on a button badge: I’m A Mess. Contained in song-titles and lyrics: ‘I Wanna Be Me’, ‘It was easy, it was cheap, go and do it!’ ‘One Golden Rule – No Rules At All’, and so on. But then there was the magic word ‘Anarchy’… which some people took very, very seriously indeed.

But for the sake of argument, broadly speaking, there are two camps. Punk was a Laugh. Punk was Fun. Punk meant Nothing (else). And in the red corner, Punk was Serious. Punk was Political. Punk Meant Everything. So Pre and Post 1979 I guess, if you want a dividing line date-wise.

This book is for the latter camp, and for those, like myself who inhabit the middle-ground between the two. Punk – to me personally, means keeping an open mind. And taking the piss out of it, pricking pomposity … (Punk Humour is another subject and there’s a book in the pipeline about that!)

The Truth of Revolution, Brother has been called the ‘the New Testament of the Crasstarfarian Bible’ and “the first Anarcho-Punk Coffee-Table Book” and that is just by people who like it. (I’m joshing!)

In order to be inclusive and trace the whole lineage of punk thinking back to the start TV Smith and Charlie Harper are interviewed. The latter is pure ‘tokenism’ and Tim Smith (in his own words, ‘goes on about death and looks miserable in the photo’).

What you have to remember about this book is that it doesn’t pretend to be the ‘Definitive Guide to’ -it is ‘an exploration of’  which lets all the people tell their stories, give it some context and narrative but in the end it lets you make up your own mind.

I came to a few conclusions about various interviewees; some I’d love to go down the pub with, others are pretentious arses, and you will do the same I imagine.

Dick Lucas is always brilliant; Penny Rimbaud is probably a genius but his prose veers towards the impenetrable. The Icleandic chaps come over as both mad and sussed, Jello is Jello and Mike Watt always entertaining. The lesser known characters like Graham Burnett – anarcho permaculture activist and author, Dominic Thackray, Oi Polloi’s Deek Allen are given equal space and billing and all have interesting stuff to say.

It is a brilliant book and has obviously been put together with lots of thought, love and care. It lets people speak and tell their stories and put over their ideas and share observations. It doesn’t preach, and it doesn’t get holier than thou and all PC (and deals with exactly those kind of criticisms within the text.) And there are wonderfully funny and touching moments.

The only thing I don’t like about the book is the way it is described on its website as being about the ‘journey’ and a kind of guide on how to lead ‘authentic’ lives . That kind of jargony self-help book / training course language immediately turns me off.

Colin from Conflict and Billy Childish incidentally are the two interviewees who really should have been included to give the book and even more well-rounded selection of opinions and insights.

What comes over in the book, but goes unsaid, is that all the talk of alternative lives and Doing It Ourselves and ‘look at what we’ve achieved’ relies on a hell of a lot of luck, a bit of deviousness and some  business acumen and a willingness to compromise, as well as  determination, struggle, sacrifice and talent, skill and single-mindedness. So not everyone can do it.

Several people make the point that living outside the system is not exclusively a punk thing, it started in Ancient Greece Penny Rimbaud tells us. The hippy counter-culture, communism, anti-fash ideals all fed in and contributed to people’s punk philosophies and ideas.

Overall, despite initial reservations I do thoroughly recommend this book.  You can dig in and out of the chapters / interviews, ignore the commentary / conclusions (Chapters headed  Disruption, Construction, Creation, Alternative Worlds and  the Dark Side of Punk) or read just them first and then the anecdotal evidence.

It is one of the most interesting and thoughtful books on punk and maybe more designed to inspire the young and idealistic rather than be tutted-over by the older cynic.

Buy it for your kids and grand-children when they start showing an interest in anarchism and Crass. Hopefully it will inspire them. The church and state-education don’t give you much to believe in, so why shouldn’t punk do the job.

~
Also check out our report from the book launch / interview with the writers from last December.

The Truth of Revolution, Brother, has on Official website here: thetruthofrevolution.com.

All words by Ged Babey whose author’s archive is here.