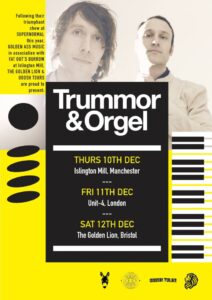 Sweden has produced some great acts, haven’t they? First Aid Kit. Robyn. The Hives. The Knife. Refused. Swedish House Mafia. The Cardigans,……..ok, Abba anyone??!!? And this eclectic and idiosyncratic sound continues with its latest offering who go by the name of Trummor & Orgel. This twosome has been active since 2003 (and recording from 2005), released five albums and are currently promoting a brand new mini-album, ‘Hopes and Dreams’.

During this duo’s colourful career, they have worked with Ebbot Lundberg (Soundtrack Of Our Lives) and Peter Moren (Peter, Bjorn and John) to create pieces of work that certainly haven’t gone unnoticed. They have even been nominated for a Swedish Grammy! Their well-honed, stripped down sound of Hammond organ and drums has attracted interest from film makers who have used the single ‘Tomorrow Will Tell’ which later appeared on the soundtrack of Mans Herngren’s 2008 film, Allt Flyter (Everything Flows). Additionally, through intensified collaboration with Lundberg, Trummor & Orgel composed a score for Jean Epstein’s Fall of the House of Usher which was performed live at Stockholm’s Cinemateket to public and critical acclaim.

They played a triumphant show at the fabulously weird and wonderful Supernormal Festival 2015 that is still ringing in the punters’ ears to date. Again, with just a Hammond and a drum kit, seemingly minimalist, but with a BIG jazz prog sound reminiscent of ‘Snarky Puppy’, Trummor & Orgel have seamlessly transcended the ‘band on a stage’ persona, to creating an event whenever they perform. Complete with visuals, a psychedelic bent and a jazz electronica that has never sounded more unique, Trummor & Orgel isn’t a band you just turn up and listen to. Some homework and open-mindedness is needed to fully appreciate the jazz greatness that these guys bring to a stage.

Catch them on their first UK tour proper at: