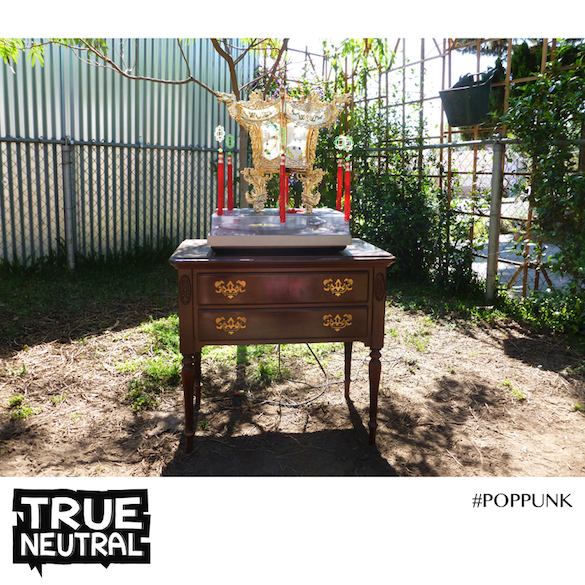 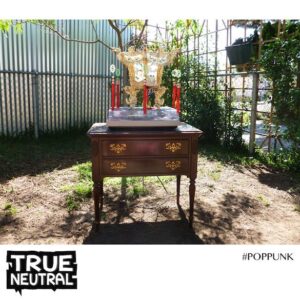 Remember that first trip on a ghost train when you were a child? Remember the bravado you had to display to your friends when secretly you were terrified? Remember how, as you got closer to the carriage, you stomach churned with excitement and fear and remember how you felt as you travelled around in the dark, scared of what was around every corner yet laughing uncontrollably as the frights got ramped up? Did you enjoy those moments?

If you did then #POPPUNK by LA artists True Neutral Crew is the album for you. It is an album that summons up all of the aforementioned emotions. There are moments of pure avant-pop that are joyous and raise a smile following in the tradition of Bowie, Sparks, and The Teardrop Explodes. Tracks like Who Else Could I Be? and New Shit are (underneath the distortion) pop in the purest sense of the word. There are melodies that are playful and memorable yet wonky and sly which is what good pop music is all about. Lyrically these tunes are also very tongue in cheek and very funny, especially the line from Who Else Could I Be?:

“…your feelings are like the opposite of Fight Club ‘cos you can’t shut the fuck up about them”.

Then there is the more sinister side of life prevalent on the deviant-waltz of closer Can’t Stop Loving You (which actually has moments that remind one of early Smashing Pumpkins), and the apocalyptic More A Kid which summons the horns of Jericho as it details the inner most thoughts of an unhinged individual as they justify violence and lay blame for their actions on an absent parent. More A Kid contains a grit and seediness that penetrates the mind and lingers there, chipping away, utterly compelling in its novelistic feel.

The production on #POPPUNK is also a thing to be marvelled at, as there is a quality control to the album that stops it falling into pure unlistenable dissonance. You always sense there is a live band at work here plugging away at their instruments in a gloriously haphazard fashion. Opener Modern Art has, underneath the gangster-style rhymes and hiss, an alt-indie band feel like someone has threatened Weezer with castration unless they amped up even further their ironic, intelligent pop. The title track itself is joyous MBV meets The Breeders which threatens to fall apart at any moment yet never quite does thanks to a production that knows exactly when to let the instruments peep out of the murk and when to smother them again.

#POPPUNK is fun, abrasive, slightly scary, yet addictive. Just like that first trip on the ghost train or, actually, this crazy ride called life.

All words by Simon Tucker. More by Simon can be found over at his Louder Than War author’s archive here.