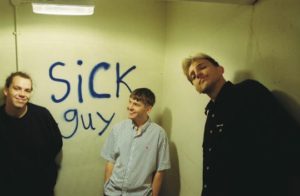 Trudy and the Romance

Hailed by 6 Music’s Steve Lamacq (apparantly a bona fide fan!) after having seen them live and made them artist of the week, Trudy and the Romance’s ascent has seemingly been quick and effortless. And through their gigging and further radio support via Radio X and Radio 1’s Huw Stephens (who included ‘He Sings’ in his Best of BBC Introducing) Trudy and the Romance have further cemented their conquest. Trudy’s previous single ‘He Sings’ united all corners of the nation in praise, from the London press outwards and promptly climbed to number 7 on the UK Spotify viral charts.

Fresh from their tour with The Big Moon, Trudy and the Romance have unleashed a new track called ‘Sandman’ which sees no let up in this Liverpool band’s output of catchy tunes. And right from the start, this track is a right old rollicker! An insistent bassline and backbeat propels the tune at 100 mph. These guys mean business! The lazy drawl of the lyrics come in and are soon replaced by yelping pained call and response vocals. Along with some psych, there is a slight hint of rockabilly and/or swamp rock with this lot which i really like. A little bit of sleaze is always nice.

As the track progresses, The Libertines comparisons are obvious and probably lazy on my part. But the Romance seem to have a more light-hearted touch to their delivery, which the aforementioned London urchins never seemed to have. And when they sing for their ‘Vanilla blue’, there is a palpable feeling of romance and subtlety to their love songs. And then it is finished. With more material in the works and yet more gigging before the year is out, Trudy and the Romance are cooking up something unique and fresh. To all those who thought the age of romance in music is long dead, Trudy and the Romance stand defiant as mutated specimens of a bygone era. It’s 2.55 of indie pop rock that hardly lets up and is a welcome assault to the senses. Nice stuff.