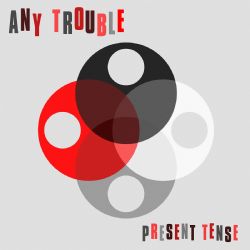 Coming after a round of well received comeback gigs, Any Trouble return seven years after “Life In Reverse” with a whopping 18 new songs on Cherry Red.

The main problem with the new Any Trouble album is not what it is, it’s what it isn’t. Though the iconography of the sleeve and the record’s title point back to the early edgy new wave of the band’s early 80s heyday, in fact what you have here is a very good but laidback country rock record. Instead it does more recall Clive Gregson’s solo career far more than the time the band spent signed to Stiff and anyone looking for “Elvis Costello”-style slicing and dicing to a raging pop-rock beat won’t find much here.

“Glen Campbell” and elegy to a fallen hero and fallen love, is midway through the LP but is the tone of it in a nutshell. Regret for times gone by, love gone wrong, youthful mistakes making for lifelong remorse. It’s all well written and Gregson can be a sharp as a knife still in his lyrics, the last verse of “Annalee” with the ending “right now I’d settle forever, lying in the shelter of her touch” being evocative and touching.

The whole album has a restrained feel, like facing up to middle age and when in “Anybody Else” whn the line “There’s none of us getting any younger” kicks in it’s clear Any Trouble are facing up to the current times rather than being on a nostalgia trip. However the country inflections do hold back the band’s natural energy and occasionally you can hear that they’re screaming to get out of the blocks with something more spritely. The Byrds’ later years are a good reference point here, rather than anything more contemporary.

The closing track “Valentine” is probably closest to their original sound, but for the large part the downbeat feel dominates – “Present Tense” is a record for reflection and remorse after a late night on the lash rather than a party record, but the quality of the songwriting makes it worth hearing.