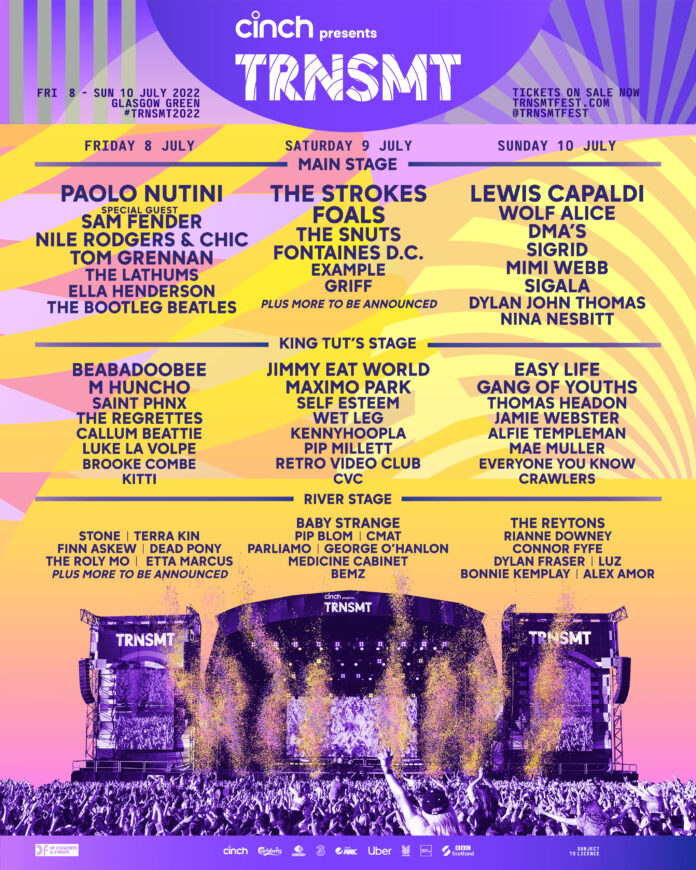 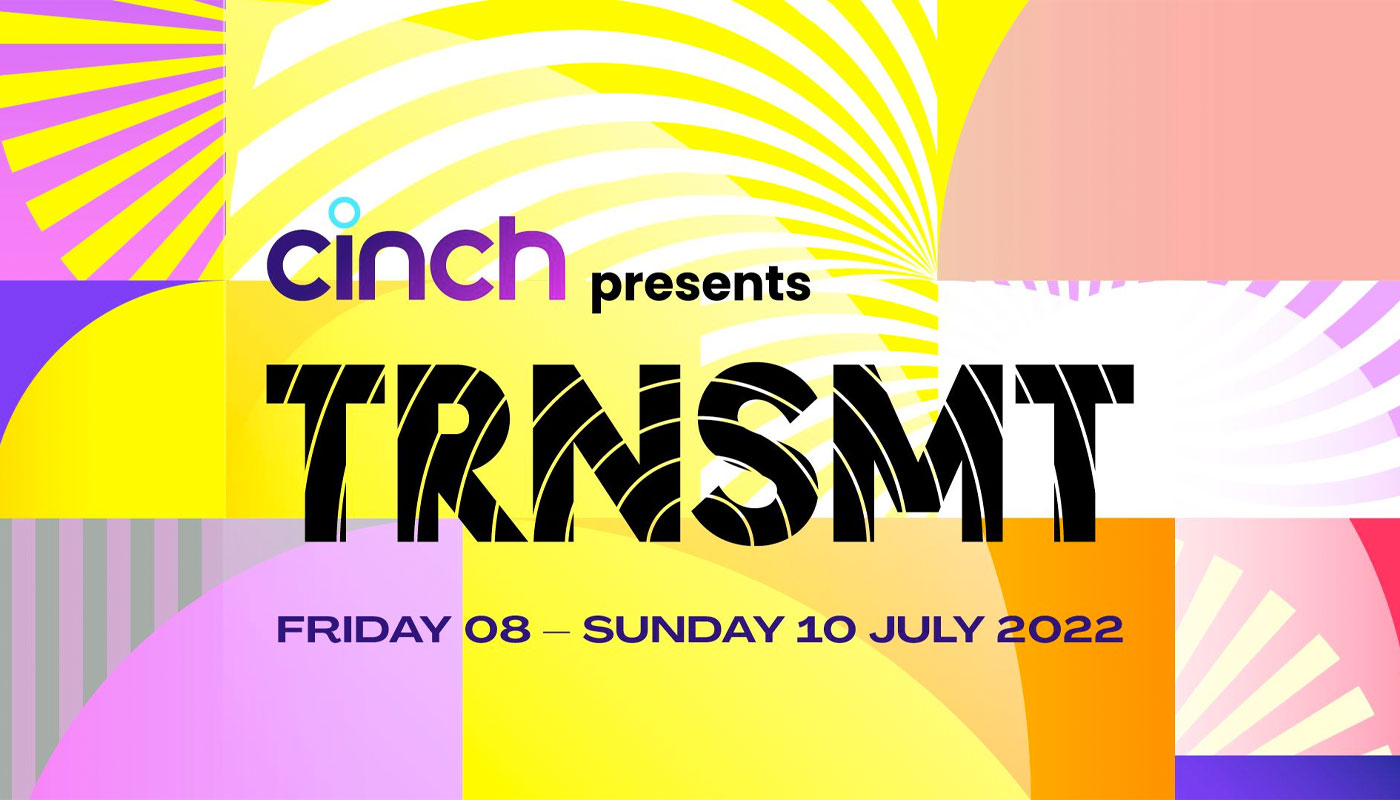 Scotland’s biggest musical party TRNSMT reclaims its traditional place in the festival calendar this July. No doubt welcoming around 50,000 each day to Glasgow Green for three days of rock, pop and indie sounds.

Usually stacked with the pick of acts on the summer festival circuit but with a significant Scottish bent, this year is no different. TRNSMT 2022 also sees the return of some who were forced to withdraw from last year’s event. 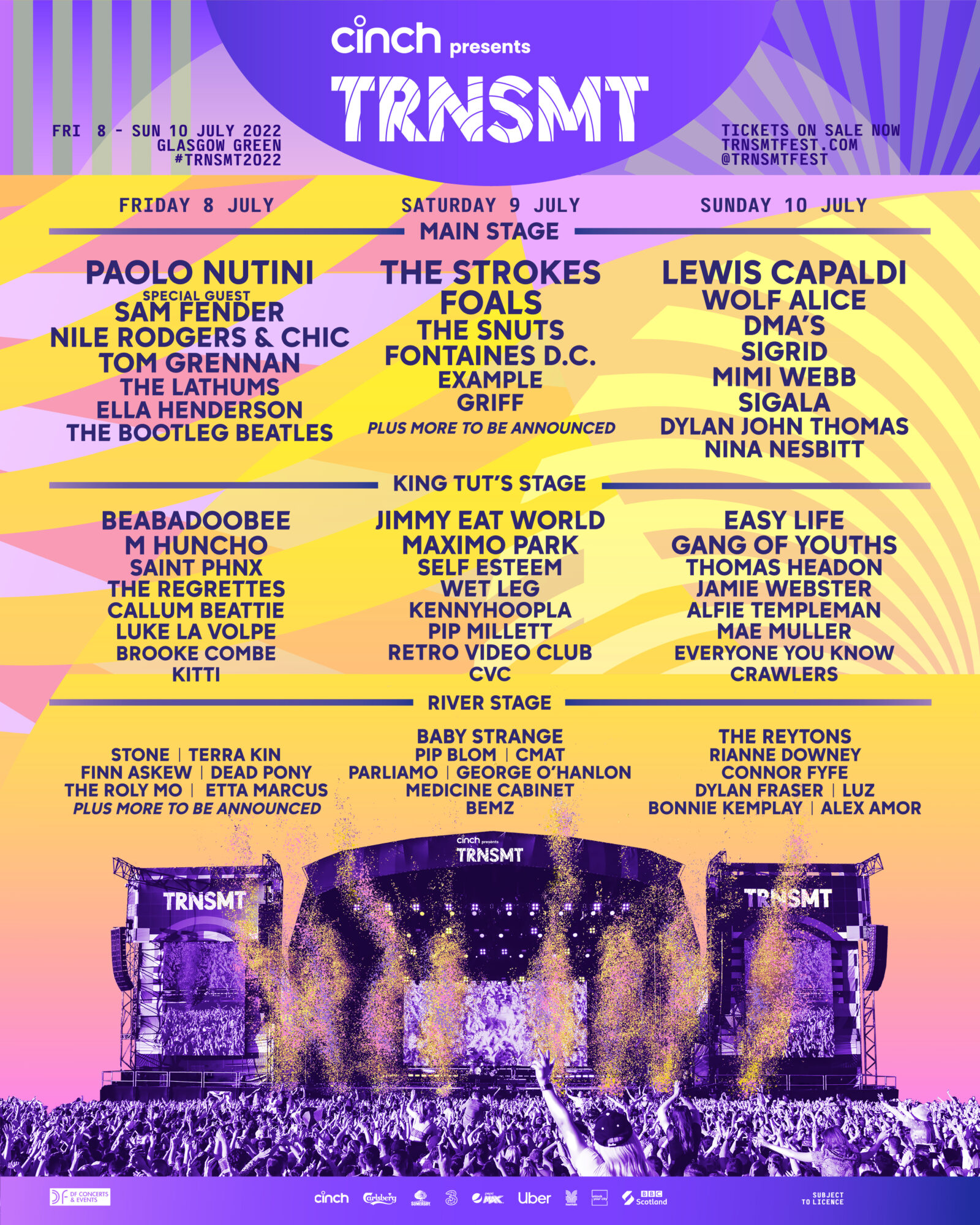 Local hero Paolo Nutini re-emerges from one of his periodic hibernations to headline Friday night. Guaranteed a great reception, it will be his first major gig in Scotland since 2016. Preceded on the night by Sam Fender and Nile Rodger’s Chic, it’s a particularly strong evening. Afternoon slots from singer songwriter Tom Grennan and rising indie stars The Lathums make for an impressive main stage line up.

Saturday sees New York indie guitar icons The Strokes playing one of only two UK shows this summer. With a line up also featuring Foals and Fontaines DC plus Scottish favourites The Snuts, it’s a dream indie guitar line up. Lower down the bill, Griff is rewarded with a main stage slot following her impressive performance at last year’s TRNSMT.

Take a look at Saturday on the King Tuts stage and there’s a recipe for plenty of potential clashes. American rock stalwarts Jimmy Eat World headline. Maximo Park are guarenteed to inject plenty of energy with a set featuring material from their current resurgent album. The excellent Self Esteem bring their caustic grown up antidote to girl power. Earlier, rising stars Wet Leg and the neo soul of Pip Mallett further widen the musical palate.

Expect crowds to arrive early on Sunday for the main stage debut of Scottish indie folk hero Dylan John Thomas. A new Gerry Cinnamon in the making, last year he drew a vast, exuberant crowd and his popularity has grown since then. He’s followed by an afternoon of pop as Sigala, Mimi Webb and Sigrid grace the main stage. There are equally poppy afternoon sounds on King Tuts with Mae Muller and Alfie Templeman before Jamie Webster brings a late afternoon alternative. His boisterous, socially and politically charged indie folk should bring things to life

Penultimate act, Wolf Alice will bring a dose of indie gravitas to the main stage as they continue their rise toward festival headliners. Closing the weekend is Scottish favourite Lewis Capaldi, returning after having to cancel last year. He’s great choice as a festival closer. He’ll undoubtedly be accompanied by the deafening sound of thousands of ecstatic Glaswegians singing along.