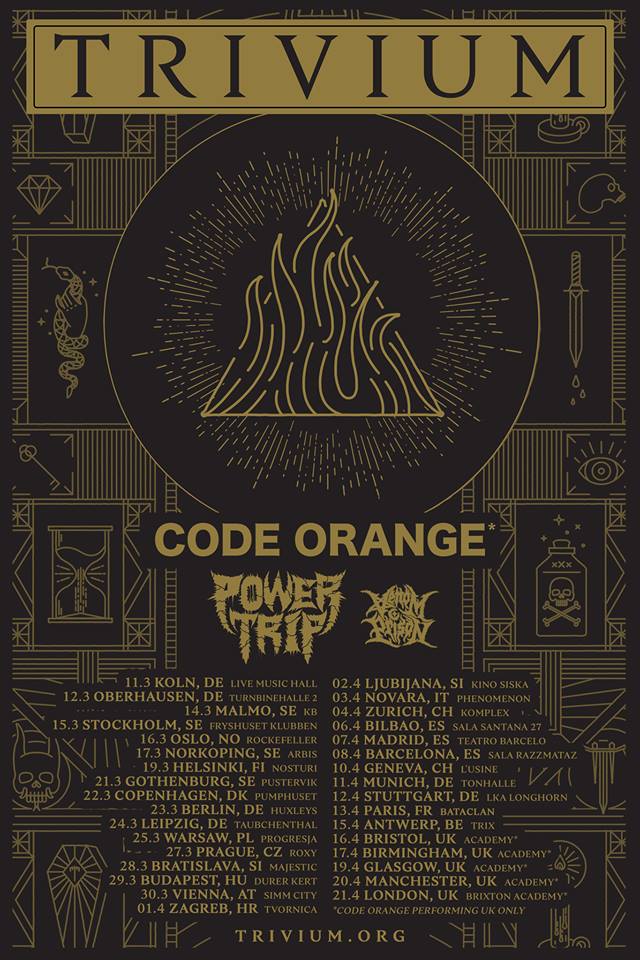 Barely more than a year since their last appearance in Manchester, Trivium have been touring yet another new album. As one of heavy metals most prolific and consistent acts, they continually set the bar high showing younger bands how to keep grafting and keep upping their game.

Taking three of the best heavy metal bands around with you on tour is a bold move by anyone’s standards. All three of the bands on the bill before Trivium have garnered plenty of praise from heavy metal fans worldwide. Trivium aren’t strangers to touring with Code Orange having toured the UK together last year.

This year, Code Orange have been elevated to main headline act. They took their opportunity as Manchester Academy was rammed from pillar to post for their set. A huge circle pit opened up immediately as the band took the stage to blast through selections from their duo of albums. Bleeding in the Blur got the biggest reaction of their set; its crossover appeal is clear and it was superb to hear again. Forever and the schizophrenic Kill The Creator also got big reactions as the band energetically bludgeoned the crowd with riff after riff, and continued calls for the crowd to give everything for the band. The crowd obliged; it won’t be long before Code Orange can take on venues of this ilk themselves.

Other support came from South Welsh death metallers Venom Prison and Dallas based hard-core thrashers Power Trip. Executioner’s Tax (Swing of the Axe) was one of the highlights of Power Trip’s set. The amassing audience revelled in the hook laden track taken from their Nightmare Logic album. Both bands brought their A-game and played their part in warming up the crowd on a bill that was stacked with incredible talent, and rich with diversity.

However good the support acts were, Trivium were a cut above them all. For so many years Trivium has always been an irresistible proposition in the live arena, and their veteran qualities shone through on a balmy night in Manchester. Their albums are steady and they have faith in everything they do. This coupled with their loyal legion of fans, make for a great concert whenever you catch them.

On this particular jaunt, Trivium are touring in support of their phenomenal 2017 release, The Sin & The Sentence. There was a massive clutch of new songs in the set that the whole crowd sung back to Matt Heafy upon request. The band opened up with the title track of the new album after the band hit the stage to Iron Maiden’s classic 1982 song, Run to the Hills. The Sin & The Sentence pays great homage to Iron Maiden with its dual guitar solo as its centrepiece. Shared vocals between Heafy and the hulking guitarist Corey Beaulieu complimented each other perfectly. This sharing of vocal duties works so well in Trivium.

Throes Of Perdition from Shogun followed in rapturous fashion, as well as Inception Of The End from 2011’s stellar In Waves record. The Crusade was represented by Becoming The Dragon which was dedicated to Manchester’s own black metal masters, Winterfylleth, and Nine Covens. The NWOBHM/Metallica style showed further the depth with which Trivium can craft songs.

With a large portion of the set from the new album and songs cherry picked from other albums, the rest of the set was made up with sons from the bands breakthrough album, Ascendency. The title track of this album was aired as well as Pull Harder on the Strings of Your Martyr, Like Light To Flies and Drowned And Torn Asunder. All the tracks were greeted like old friends and vociferously sung word for word by the crowd.

As always, a highlight of the bands set was the crushing call of In Waves, which the band closed out the evening with. With that being said, it was a new song that could be a constant staple of the bands repertoire in years to come in the form of Heart From Your Hate. It has an anthemic feel to it, and again the crowd lapped up every chorus; the song shows an ever increasing maturity in Trivium, without losing the crushing heaviness and power that they possess.

Bills like this are a joy in the world of heavy metal. It was a collection of four diverse bands all bringing their own style and energy to a packed venue, showing the upmost respect for each other with their stage calls, and a group of fans all having a great time which made for a superbly heavy night. Long may Trivium continue to grow and rule, because on this evidence, they’re not going to be going away anytime soon! Brilliant.