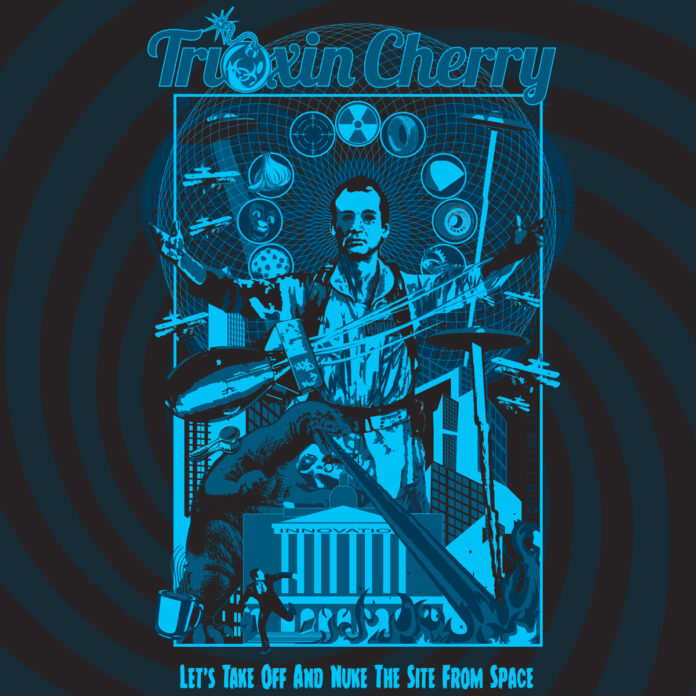 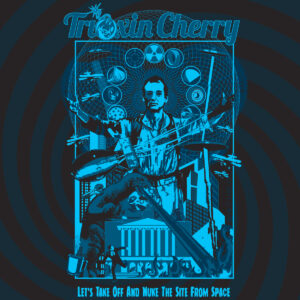 Trioxin Cherry: Lets Take Off And Nuke the Site From Space (STP Records)

Somehow we omitted to review this great release last year by Trioxin Cherry, the grunge horror punk band from the UK who beat the Yanks at their own game – sez Ged Babey.

This is one of those albums that we should have reviewed earlier and should have made the end of year lists but I only picked it up after seeing the band play live. It’s hard to know where to pigeon-hole it. Punk, grunge, horror-punk, death-rock, comedy/sci-fi /geek rock….all of the above, but it’s simply a lot of fun, great musically and a band with personality, character, humour and intensity.

The opening track will confuse the fuck out of you. A spoken word intro, in Japanese and a song sung pretty much in the Japanese too, called Bakka Manko, which I gather meants Stupid C*nt!  On the CD copy the intro is track 1 and the song track 2 but labelled with the title of what should be the next song, which fucks up the titles of the rest of the tracks and then there’s a secret track at the end of the last track Untitled which is an acoustic version of the preceding song, which is the I Wish I was Going To Rebellion one. So all in all it’s a complete fuck-up. Which is a shame but it doesn’t stop this from  being one of the best albums of 2014.

I described the Rebellion song as being a bit twee and like a punk rock Victoria Wood to which Rebbecca Trioxin replied “I LIKE Victoria Wood”. She will no doubt insert a DVD of her work up my arse in an effort to prove her bands lack of tweeness next time I see her.

The centrepiece of the album, amongst songs about killer rats and psycho killers, zombies and revenge is a song called Fly, Bill Murray! A love song to a robot superhero incarnation of the loveable comedy actor. They love him so much he’s on their Pussycat-designed official t-shirt.

The title track of Lets Take Off and Nuke the Site From Space takes a cosmonautical view of the world’s problems and concludes that there’s no hope for the human race. But for an interplanetary protest song it still puts a smile on your face and sounds like Fay Fife singing with Nirvana.

Hit Me is another stand-out track, condensing a bizarre revised Fight Club into a pre-menstrual 3minute 14 punk-rock knockout of a song.”Hit me like you mean it, hit me if you care…”

Even as I write this I hear that they are mid-way through recording their next album so come the summer, there will be more even better TC stuff available, but for now get a hold of this Cherry bomb. (Wrong Turn from the album is below).