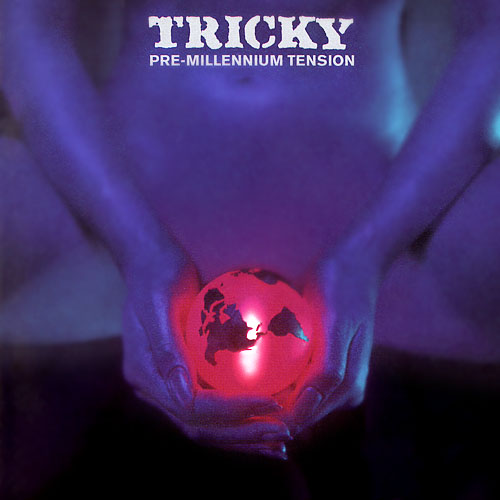 Tricky’s follow up to the chart bothering ‘Maxinquaye’ was a dark trip. The ominous title, and the foreboding neon cover give a tension ridden aura. 20 years on it has been reissued with several extra cuts/remixes included; does ‘Pre-Millenium Tension’ stand the test of time?

By his own admission, Tricky wanted to try and get away from the trip-hop label. His work with Massive Attack, The Wild Bunch and the superb Maxinquaye had cemented Tricky as one of the main players in the Bristol scene of the late 80’s/early 90’s.

‘Pre-Millenium Tension’ immediately raises its tension filled bar from the opening sounds of ‘Vent’, the album opener. Backward, looping guitars makes for uneasy listening and the menacing ‘can’t hardly breathe’ vocal mantra only seek to pull the claustrophobic walls of the album in. Slower, repetitive beats are one of the main focuses of the album. ‘Bad Dreams’ beat oriented opening agitates the senses. The distorted, cyclic beat is the rock underneath another shadowy lyric and nervous guitar licks.

One of the singles from the album (along with ‘Christiansands’ and ‘Tricky Kid’), ‘Makes Me Wanna Die’, is a rare moment of light in the album. The title suggests otherwise although the lamenting vocal from Martina Topley-Bird is warmer than most of the vocals here. Musically however, the track is a more uplifting feel amongst some of the darkest songs ever committed to record.

Tricky recorded the album largely in Jamaica. The influence of this land is clear on Ghetto Youth’s reggae inspired vocal. One of the absolute highlights of Pre-Millenium Tension is S’ex Drive’. The undulating bass line and sporadic harmonica howls mesh together superbly. Another highlight of the album is Tricky’s cover of Erik B & Rakim’s cover of ‘Lyrics of Fur’y. This track takes the award for the most upbeat of the album.

Of the additional material on the Expanded Edition, there are B-Sides and remixes. A Guy Called Gerald’s almost drum and bass take on Piano (The Green Stinky Mix) is one of the highlights of the extra material. Tricky’s Extremix of ‘Makes Me Wanna Die’ is the complete polar opposite to the single release. A hyper beat, and less melancholy vocal make the aesthetic of the track fit in more with the rest of the album.

‘Pre-Millenium Tension’ is a heavy album on many levels. One look at the track listing reinforces this. The dark lyrical content, the apprehension in the beats and the gravelly, hypnotic vocals of Tricky make for a welcome trip back in time. There is still nobody around in the music world that is an iota like Tricky. His talent is unique.