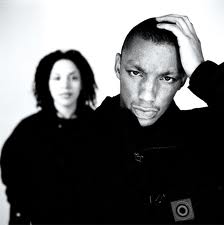 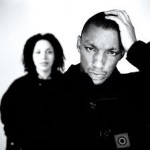 Tricky and Martina Topley Bird are part way through a tour playing the complete Maxinquaye. You may’ve heard reports that these shows have been a tad shambolic. For those curious for more details here’s an eyewitness account of his Manchester show by Sonj.

Sometimes I get a bit of a bee in my bonnet and feel the need to go on about things. This gig has become one of those bees. Please forgive me if any specifics on song order etc seem lacking, I wasn’t expecting to be going on about it afterwards. I have chosen to write about it though because it was the most bizarre gig that I’ve ever been to, but unfortunately not in a good way. So here goes, my account of a car crash called Tricky.

I pounced on these tickets, the opportunity to see Maxinquaye performed in its entirety for the first time in 15 years was definitely not going to pass me by. It’s an ace album with some damn good tracks on it. I was looking forward to the gig and then the venue changed, from the Academy 1 to the smaller Academy 2. I was pretty gutted about this as the Academy 2, in my opinion is the most shite live venue in Manchester, I hate the sound, the room and the crap facilities.

Although there were still tickets available, the place was pretty full. The crowd were aged mainly 30+ and obviously there to pay homage to a much cherished album.

So, Tricky, he comes on stage to a warm Mancunian welcome, expectations are high. Martina comes on to applause and begins singing. An appreciative crowd admire her whilst Tricky kinda gets into his groove a bit, making the odd sound here and there. Yep, all seems well. Then his top comes off. Very nice, I’m thinking, not one to be upset by a nice chest. Next thing, they’re touting for audience members to get up on stage with him. Ok, seems a bit early but it makes it different, so we’ll go with it. A few excited bods get up and relish in the experience and opportunity to give the Tricky man a hug. Then one of the stage guests seems to push it just a bit too far, maybe he wanted one hug too many, and here we have it, the first uncomfortable wtf moment. Tricky’s shoulders go back in alpha male stance as he territorially marches into this guy, having what must have only been stern words with him. The guy looks a bit shocked and intimidated, and immediately does as he’s told and gets off the stage. I’m thinking, Woah, you don’t fuck with Tricky.

It kinda goes ok for a bit, then Tricky’s off stage while his brother and co performer do a hip hop number. It may be unconventional to showcase other acts in the middle of your own set but hey ho, there are no rules, are there. They’re quite a lively pair but then they’re off and Tricky’s back. There are a few more numbers but to be honest, I’m starting to get bored by this point, I’ve hardly heard him sing, his mic is either malfunctioning, on mute or he’s just dribbling out obscure sounds and utterings instead. I wasn’t sure. I wasn’t impressed. I came to see Tricky with Martina but really I’m only aurally present with Martina, the band and his brother’s outfit.

Things then take a turn for an unforgettable worse and there’s no coming back from it. He forgets the words a little way into a song, stops it dead, saying he can’t remember them ”Ëœcause it’s been 15 years since he’s had to perform them. Martina, in true professional and quick thinking style, enlists the audience to the rescue, “We can just start at the chorus, can’t we.”Â She leads the audience who dutifully follow, singing along in acappella as the band wait for a suitable cue to come in. But no, Tricky takes this as a personal affront of some kind and makes a snappy remark, (I think about point scoring?), to which Martina says “Whatever.”Â to him. Well, this is certainly another wtf moment. Faces in the crowd morph into uncomfortable confusion. The band starts up again, but Tricky’s visibly stressed by this point. He’s pointing at his stage crew to get their attention, they come over, God knows what’s going on, he’s going on about something though. It’s terrible to watch and completely distracting from the music.

That song finishes and Martina goes over and seems to try to lighten the mood with him. Another song, by now the atmosphere is weird and we’re already considering leaving. It’s just not working, the band are good, Martina’s good, but not good enough to completely carry it. There’s so much depth missing, most likely because Tricky’s completely ballsing any chance of sophistication and professionalism up. It’s turned into a dark show highlighting some extreme vulnerabilities and problems.

Then the last straw, for me, was when a crowd member shouts up to Tricky, “Be happy!”Â to which he defensively retorts, “I am happy, I’m a very happy man with a very nice life.”Â I wasn’t convinced about that, at all. By this point, I just couldn’t bear to watch anymore, I was getting proper upset for him. It was all careening out of control and he was getting more stressed and you could tell he’d be gutted and strung out after the gig, not to mention the way it would have affected any group dynamics within the band/management. I had to go, it was too uncomfortable and I could see it only getting worse, not better. I’m not into watching others suffer.

There have been comments banded about that the event was shambolic as was the previous night’s performance in London. Some have said that he was caned, and that he didn’t care about the gigs or want to be there. I didn’t think that at the time, I don’t think I knew what to think, but in retrospect, his behaviour would certainly support that. It was all very ill prepared. He acted like a coke head in the last stages of getting away with it, the bit where you start to really fuck everything up by losing perspective and getting arsey with everyone and everything.

Was he having a bad couple of days or was it all on the cards? Should his management have stepped in to avert him from damaging his career? If it was on the cards then I definitely think that something should have been done in advance. Apparently, he’s in the studio recording new material. I’ll be very interested to hear it, I hope it all goes well and it’s greatly received. Will I be going to see him live again though? Erm, no, definitely not. I feel a bit fleeced of my ticket money, firstly ”Ëœcause I ended up in the crap Academy 2, secondly because he didn’t really perform anything properly and thirdly because he made me feel sad, very sad. I don’t think I’ll be alone in those sentiments either. What a shame.

All words by Sonj. You can find more by Sonj on Louder Than War in her author’s archive.