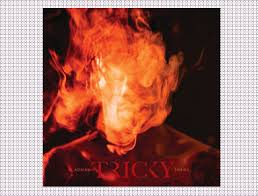 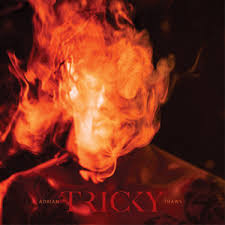 Bristol’s Tricky has hit a rich vein of form lately starting with 2010’s patchy but enjoyable Mixed Race, last year’s magnificent False Idols and now this album, Adrian Thaws (his birth name), a work that finds Tricky in boisterous and hedonistic mood. This is the most club-friendly album he’s made – Tricky describing it as such himself.

Over its running time, Adrian Thaws incorporates jungle, hip-hop, reggae and industrial music making it an intense but commercial feel. Not that he’s gone soft on us, there’s an extremely complex individual at work here but he now seems to be revealing his lighter side in addition to his well documented demons.

Songs such as Something In The Way and the warm, jazzy, I Had a Dream (both featuring London-based singer songwriter Francesca Belmonte) use familiar Tricky themes of twisted and impulsive love. The music around them is gentle with pulsing drum machines and melodic piano flourishes making them feel like they were brought from the past but still contain enough flair to make them extremely current – songs that can be our past, present and future.

The position of these songs on the album is vital as they both come after the hard-hitting and brutal tracks, Lonnie Listen and Gangster Chronicle. The former lives in the murky world of Reznor’s N.I.N and lays down some digital concrete, the latter batters us around with the heaviest of hip-hop and dubstep beats.

Gangster Chronicle is a high watermark as it bends your ears until you cry mercy, with layered instrumentation resting heavy in your mind. There’s also an achingly beautiful sample of Unfinished Sympathy which raises a wry smile.

Vocally, Tricky has once again selected his collaborators impeccably with the aforementioned Belmonte adding warm, honeyed layers whilst others such as Bella Gotti (who adds venomous verses to the drum and bass guitar-driven Why Don’t You) and Mykki Blanco, whose insidious delivery on Lonnie Listen is eerie and inviting, yet it’s Tricky’s voice that remains the most intriguing. His vocal stylings are still one of the most exciting out there and it’s always a joy to listen to him whisper in your headphones like the bad side of your conscience convincing you to get just a little bit devilish.

Adrian Thaws is not a perfect album. Niotene Love is lyrically poetic yet musically mainstream and Silly Games’ reggae leanings seem quite light and standard but it IS another exciting release from Tricky and an album that, on the whole, inspires, terrifies, and delights.